How is Mount Kailash, the abode of Lord Shiva, described in Hindu scriptures? 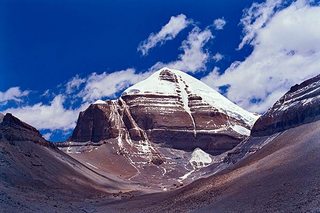 Sacred Mount Kailash (कैलाश) is the abode of Lord Shiva. Shiva, who embodies the destroyer aspect of the trinity of God {Trimurti} is said to reside at Mt. Kailash.

How is this Kailash mountain described in Hindu scriptures? (its description, its surroundings, plant and animal life etc.)

There are two Kailasas. One in Cosmic Plane and other Kailasa on Earth.

Rudra happens to be his complete and perfect incarnation. Five faced Siva (Sada Shiva), has built a blissful abode at Kailāśa, which is beyond destruction even after the destruction of the universe.

Just after creation, Kubera prayed to Lord Shiva at Kasi, where Shiva is always present in Saguna form as Vishweswara. After granting boons to Kubera, Shiva thought to stay close to His devotee Kubera.

Rudra born out of my heart is the only and complete Brahman, who is served by Brahma, Visnu and other gods. He is inseparable from me being invisible.

Therefore, I, in that form, becoming his friend, shall live at Kailasa close to Kubera and performs severe tapas.”

So, Shiva in human form as Rudra moved to Kailasa mountain, which is curently situated in Tibet. However, this story happened in Meghavana Kalpa, which came after Padma kalpa.

Kailasa is described in very detail in Chapter 6 of 4th Canto of Srimad Bagavatam.

After thus having instructed the godly ones Lord Brahmâ went away with in his wake the forefathers and the leaders of the people whom he took from his own place to the abode of Lord S'iva, Kailâsa, the best of all mountains that is so dear to the master.

[The place] enjoyed by Kinnaras, Gandharvas, and Apsaras [the residents and singers of heaven and their wives] is populated by the perfected ones [or Siddhas] who differ from other people [or are gifted] by birth, by austerity, by their use of herbs or by practicing mantras in yoga. The mountain range home to a diversity of deer is replete with all kinds of precious stones and is grown by trees, creepers and a diversity of other plants. The mountain peaks with their crystal clear waterfalls have various caves that accommodate the mystics who sport there with their loving wives. Resounding with the cries of peacocks and the humming of bees blind of intoxication, there is the continuous song of cuckoos and chirping of other birds. With the elephants moving the mountain itself seems to be moving, with the sounds of the waterfalls the mountain itself seems to resound and with the trees that yield to all desires the mountain itself seems to be stretching its arms calling for the birds.

Kumuda, utpala, kahlâra and s'atapatra lotuses cover the lakes of the forests which, filled with the sweet whispers of flocks of birds, harbor deer, monkeys, boars, cats, bears, s'alyakas, forest cows and asses, tigers, smaller deer and buffaloes and such. It is enjoyed by different types of deer like the karnântras, ekapadas, as'vâsyas, vrikas and kastûrîs and has groups of banana trees near the sandy banks of the beautiful hillside lakes filled with lotuses. The devoted ones saw the waters of lake Alakanandâ carrying the flavor of Satî who bathed there and they were struck with wonder about that mountain of the Lord of Ghosts.

There at Alakâ ['uncommonly beautiful'] they saw the region with the forest named Saugandhika ['full of fragrance'], which carried that name because of the species of lotus flowers one finds there. And the two rivers the Nandâ and Alakanandâ flowing close to the abode of the feet of the master were even holier because of the dust of the lotus feet. Dear ruler, in both the rivers the celestial damsels descended coming from their dwellings after their lovemaking in order to play there with their husbands and splatter each other with the water.

The two streams having turned yellow because of the kunkum powder [that washed from their breasts] make the elephants and their females who take a bath there drink from the water, even though they aren't thirsty. The heavenly homes enjoyed by the wives of the virtuous ones were bedecked with countless valuable jewels, pearls and gold which made them look like clouds in the sky brightened by the flashes of lightening.

Passing through the Saugandhika forest that was so attractive with its variety of trees yielding to all desires with its flowers, fruits and leaves, they reached the abode of the Lord of the Yakshas. There they saw the beauty of many birds with red necks whose sounds mixed with the humming of bees as also lakes with groups of swans and most precious lotus flowers. The breeze of the sandalwood trees made the wild elephants flock together and stimulated the minds of the wives of the virtuous ones over and over. The staircases leading to the bathing places full of lotuses, used by the ones faithful to the divine personality [the Kimpurushas], were made of vaidûrya stone and as soon as they saw them they spotted a banyan tree nearby. At a height of thousands of feet it spread out its branches over a quarter of the foot of the mountain, casting a fine cooling shadow. It had no birds nesting in it.

Underneath the tree the godly ones saw Lord S'iva, the shelter of many a great sage desiring liberation, sitting there as grave as eternal time in having given up his wrath. Saintly liberated souls like the Kumâras headed by Sanandana and Kuvera, the master of the Guhyakas and Râkshasas, sat there in praise around the solemn and serene Lord.

Beauty of Kailasa is also described in Chapter 11, Uttara Khanda of Padma Purana. The Demon king Jalandhara, who was born out of Amsa of Shiva, saw Kailasa as follows:

Narada said: 29-40. Then the very mighty son of the Ocean (Jalandhara) proceeded to Kailasa. He was surrounded by sixty thousand mahapadma soldiers. In the meanwhile, Siva, leaving Kailasa, went, along with his attendants, his sons and his dear wife, to (that part of) Kailasa to the north of the Manasa (lake). Then on the first day Jalandhara reached Kailasa. Setting his army there, he was eager to see Kailasa.

There the breezes to which the masses of the divine filaments and the pollen of mandara (flowers) had resorted, and which were broken by the showers of the sprays of cold drops, blew. Charming breezes, high like the stout breasts of the siddha women, and rich with the honey of mandara, blew there. Seeing there the planting of their feet by ladies bright and glossy like the asoka(-flowers), the lord of the demons became full of the sexual desire. The gods there delighted at seeing their own reflections were pleased. There, the mandara (trees) with their sprouts withered, shone everywhere, after having manifested the coitus of the kinnara lovers. There the groves of many trees were occupied by the attendants of Sambhu. They appeared to be as it were well sustained by king Cupid. There the swarms of bees intoxicated by the fragrance of sandal and musk appeared like the charcoals of the burnt Cupid, that were put out.

Not the answer you're looking for? Browse other questions tagged shiva puranas pilgrimage .

11
Why don't we see Lord Shiva living on Kailash if he really exists?
9
What is the story of Kasi Vishwanatha Jyotirlinga?
6
In which lokas are the Apsaras born and which other lokas do they go on to inhabit?
12
Why did lord Shiva choose Mount Kailash (earth) as his abode?
8
What do scriptures say about Lake Manasarovar?
6
Where Lord Shiva used to reside during the time when the Himalaya did not exist?

20
Supreme Brahman in Hinduism
13
Does Sadashiva ride a tortoise?
10
Do any scriptures apart fom Sabarimala Sthala Purana foretell the birth of Ayyappa?
13
How did Tripura Sundari come into existence?
5
Why is Gangotri so far from mount Kailash?
12
Why did lord Shiva choose Mount Kailash (earth) as his abode?