Did Lord Rama reach Ayodhya after 20 days from Dusherra?

I've came across this question in Quora which got so many answers according to their view.

I think some answers are utterly incorrect. Moreover one answer says it took 1 yr 18 days to return to Ayodhya. I think it contradicts and deviates from the actual information in the scriptures.

But was it really mentioned in valmiki ramayana that they took 20 days to reach Ayodhya from Sri Lanka? What is the actual time he took to return to Ayodhya and how did he returned?

I do not know how the story of Rama killing Ravana on Vijaya Dashami and returning on Deepawali became famous.

If we go through Valmiki Ramayana. It doesn't give precise information on time span between killing of Ravana and returning of Rama to Ayodhya. Furthermore, it is not possible that Rama killed Ravana on Vijaya Dashami and awaited 20 days there and returned to Ayodhya on Deepawali, as they returned through Pushpak Vimana.

Padma Purana Patala Khanda chapter 36 gives each and every Tithi of Rama's life in detail. The relevant verses from that Chapter are:

The obsequial ceremonies of Ravana and others took place on the new-moon day. Rama stayed on the battlefield on the first day of Vaisakha. On the second day of Vaisakha Vibhisana was consecrated on the kingdom (i.e. as the king) of Lanka. On the third day took place the purification of Sita and obtaining boons from gods. Having, after a long time, killed the lord of Lanka, he, the elder brother of Laksmana, accepted the auspicious Janaki, afflicted by the demon (viz. Ravana) and taking her (with him) with great love, he returned. On the fourth day of Vaisakha Rama got into the Puspaka and through the sky again came back to Ayodhya. When the fourteenth year was complete Rama along with his group stayed in Bharadvaja's hermitage on the fifth day of Vaisakha. On the sixth day he met Bharata at Nandigrama. On the seventh the descendant of Raghu (i.e. Rama) was consecrated (as the king) in Ayodhya. MaithilI (i.e. SIta) lived without Rama in the house of Ravana for eleven months and fourteen days. Rama ruled (i.e. was consecrated as the king) when he was forty-two years old. At that time SIta had completed thirty-three years. That lord Rama being delighted entered the city Ayodhya at the end of the fourteenth year and with his brothers ruled there.

As Deepawali and VinayaDashami falls on Ashwin Kartik and considering 20 days gap between them, it is not possible that Rama killed Ravana on Dashami and returned on Deepawali.

81-85. The (test of) purity of Sitä took place on the third day. Boons were granted by Devas. Da'aratha came (from heaven and gave his approval to it). After -slaying the lord of Lankä, the lord (Räma), the elder brother of Lakshmana, took with him the meritorious daughter of Janaka, who had been subjected to misery by the demon and re- turned with great pleasure. On the fourth day of Vaisäkha Räma boarded the aerial chariot Pushpaka. He returned by air. On the way to the city of Ayodhyä, when the fourteen year period was complete, on the fifth day of the month of Mädhava (i.e. Vaisäkha), Räma and party camped in the hermitage of Bhäradväja. He came to Nandigräma by Pushpaka on the sixth day.

86-89. The great scion of the family of Raghu was crowned as the king of Ayodhyä on the seventh day. Maithili stayed in the abode of Rävapa separated from Räma for a period of fourteen months and ten days. Räma began to rule the kingdom in his forty-second year. Sitä was then thirty-three years old.

The correct answer would be - it is hard to decide based on Valmiki Ramayan. The other scriptures quoted in answers are most likely talking about a different Ramayan not the one that happened in the current Kalpa.

The Matsya Puran clearly states that the Padma Puran was revealed in the Padma Kalpa which was the last day of the 50th year of Brahma. 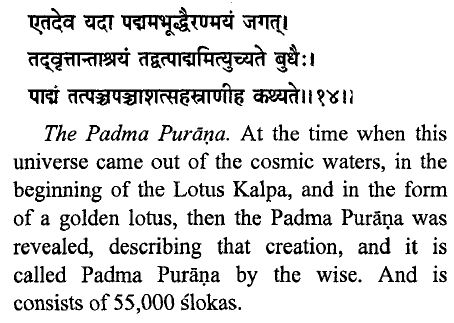 The Ramayan we are talking about happened in the current Varah Kalpa or the 1st day of the 51st year of Brahma.

Again both Skanda Puran and Padma Puran mention that the Ramayan war lasted for 87 days with a 15 day moratorium in the midst of the battle. Nothing like that is mentioned in the Valmiki Ramayan.

Even if you assume the time when Ram and Lakshman were unconscious it wasn't more than couple of days at most since Hanuman rushed to get the herbs from Himalayas and came back as quickly.

Gazing at the hills, flocks of birds, lakes, rivers, pools and excellent towns full of people, that Hanuma with a speed equal to that of the wind-god his father, shot forth towards Himalayas.

Also the traditional duration of the battle has always been mentioned to be 13 days NOT 87 and this analysis clearly talks about the dates even if we do not agree with the time period it comes up with.

So judging by all the evidence, the correct answer should be - based on Valmiki Ramayan, it is difficult to conclusively support or refute the belief that Shri Rama returned to Ayodhya exactly after 20 days.

"On discussing among themselves they found that spring season has arrived, and they also found the purpose of timely messaging about Seetha to Sugreeva is lost, thus they plumped down onto the surface of earth"

After taking guidance of Sampati, Sri Hanuma flew to Lanka on the same day

a) The journey time from kishkinda to Ocean was not provided in Srimad Ramayana.

b) He spent 3 days praying for Ocean god.

Following the scriptural injunction, that Rama who was devoted to his sacred vow, while sleeping on the ground spread with Kusha grass, spent a time of three nights there."

c) 5 days were spent in construction of Bridge to Lanka.

5) On the next day Angada was sent as emissary to Ravana and war began on the same day. On the First (1 day) day of the war , Indrajit bounded Sri Rama and Lakshmana with Nagaastra. However, at the arrival of Garuda, they were relieved.

6) on the 2nd of war Ravana himself enters the battle field, and gets defeated at the hands of and let off by Sri Rama. Kumbakarna was woken up.

8) On the 4th day of the war , Indrajit gets killed on Krishna Chaturdasi day (It must be Phalguna Month)

"Making yourself ready today itself, the fourteenth day of the dark half of this month, you along with the armies, sally forth tomorrow, the moonless day, to victory."

9) The war between Sri Rama and Ravana started on Amavasya day and continued for 1 full day.

10) It was described in Srimad Ramayana that Sri Rama reached the hermitage of the sage Bharadwaja, on the fifth (5th) day of lunar month after completion of 14 years of exile.

After completion of fourteen years of his exile and on the fifth day of the bright half of the lunar month , Rama, who was disciplined even now, reaching the hermitage of the sage Bharadwaja, offered his salutation to the sage.

Sri Hanuma conveys to Bharata that on the next day, when the nakshtra (Star) was Pushyami , Sri Rama will reach Ayodhya.

"Reaching the coast-line of Ganga-river again, Rama is staying in the presence of the sage, Bharadwaja. Tomorrow, when the moon will be in conjunction with the asteroid, Pushya you will be able to see Rama, without any obstacle."

After deciding upon the Crown prince ceremony of Sri Rama, the king Dasaratha directs his priests Vasistha, Vamadeva, etc to make arrangements.

"This is the glorious and auspicious month of Chaitra, in which the forests bloom with flowers. Let all arrangements be made for the coronation of Rama as prince." While these words of the king were being completed, there was a great delightful uproar of the people."

The king Dasaratha then informs Sri Rama about the ceremony.

"O, Rama! As you with your good qualities cherished these people, you get the princely kingdom on the day of Pushyami star (when the moon appears in conjunction with the constellation Pushya).."

On the same day, Sri Rama left for the Forest in order to fulful the boon given by his father to Kaikeyi. So it is Chaitra month in which he left Ayodhya.

Not the answer you're looking for? Browse other questions tagged scripture ramayana history rama .

2
Where does the Valmiki Ramayana state that Lord Rama killed Ravana in the month of April/May?
9
How many days did Ravana keep Sita confined?
15
Which is the oldest scriptural reference for Diwali?
1
Time left to rescue Sita from the day of her kidnap

5
Did Ikshvaku Rama rule Ayodhya or Vishnu avatara Rama?
1
Why did Kaikeyi send Lord Rama on Vanvas?
7
Which scripture mention Lord Rama reached Ayodhya on Kaartika Amavasya (Deepawali) after 14 years of exile?
2
What happened to the Rama Setu after Ramayana?
11
How did lord Rama perform penance for Ravana after killing him?
7
Lord Rama's path to exile from Ayodhya in today's India