Does the word "Indrajāla" (Indra's net) have any connection to the god Indra?

Does the Sanskrit word Indrajāla (Indra's net) have any connection to Indra or Arjuna? Has this word been used in any Hindu scripture? If so in what context?

This Sanskrit dictionary suggests the following meanings for the word.

Indrajala has been used in various scriptures. It has various meanings as given by OP in question. It is also a name of weapon used by Arjuna as given in Mahabharata:

In Mahabharata, it is also used in the sense of magic as below:

Neither deception, nor conjuror's tricks, nor jugglery, can terrify the armed man addressed for fight. On the other hand, these provoke only his wrath.

second Indrajala-astra having the properties of magic. By the influence of the sancara-astra the faces of the demons and the Devas were changed into those of the Devas and Danavas. 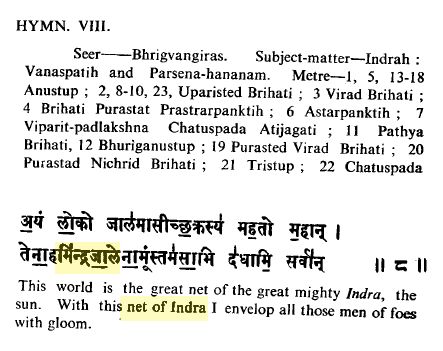 Another translation of the above Atharva Veda verse is as follows:

With this, the net of Indra, I envelop all those men with gloom.

Has this word been used in any Hindu scripture? If so in what context?

There were seven techniques that kings were suppsed to use in ruling their kingdoms. These were known as sama, dana, danda, bedha, maya, upeksha and indrajala. Of these, the first four are the most famous. Sama means the art of gentle persuasion. Dana means the usage of donations or money to achieve one’s purpose. Danda is punishment. And bheda is the art of aggravating dissension amongst parties opposed to each other. Maya means to use illusions or deceit and upeksha is to deliberately ignore people so as to achieve one’s purpose. Indrajala literally means jugglery. In this context, it would mean to perform a balancing act amongst opposing pulls and opposing parties.

And, as per this page the beeja Prim is used in Tantrik rituals for Indrajala(magic).

The mantra Prim is the crow bija, used in works of Indrajala (magic).

The word indrajAla philosophically mean the cosmic interconnection between every other entity. First mention of which is found in Atharva. Physically it may also mean other things like maya, magic and deceptive weapon(s).

Shankara's commentary of the above verse states,

... I [Krishna] Myself am the source of the world. Since this is so, therefore, all; this, all things, the Universe; is strung, woven, connected on Me; like cloth in the warp, and like peals on a string.

Never forgetting that the world is unreal and its cause unascertainable, the wise man stands secure from harm in the midst of the enjoyment of his fructifying karma.

Now you hear me narrate this excellent story which shows the world to be like an indrajAla, i.e, illusory wonder resting on the consciousness.

... King should always endeavour to achieve success through all possible means, i.e., sama (the use of friendly measures), danam (the payment of money), bheda (creating dissensions among the alles of an adversary), danda (war), maya (stratagem or treachery), upeksha (indifference) and indrajalam (deceit).

Not the answer you're looking for? Browse other questions tagged scripture arjuna indra symbolism .

7
Does the Gita have any apocrypha?
10
Does any God exist without form/image in Hinduism?
5
Is Indra the chief god of the Vedas?
6
Is Indra of the Vedas the rain god Indra?
5
Does any scripture mention that forms of God or Goddess are symbolic?
3
Are Devas like Indra god?
3
Is there any sukta in Rigveda containing 16 richas and starting with the word"Indra"?
3
Is there any modern interpretation for Indra's curse to women and other entities?