Since Mahābhārata happened after Rāmāyaṇa, why did Pāṇḍu kill a deer that was mating?

In the very beginning of Rāmāyaṇa, Vālmīki curses a hunter for shooting down a krauncha bird because it upset him very much. But isn't it the sva-dharma of a hunter to kill deer or bird for food? 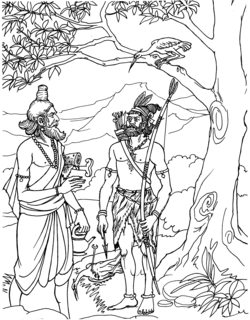 Yes, it is. However, as Vālmīki says, a hunter can kill a bird, no doubt; but only when it's alone. And not when it's with its mate both enjoying their time together.

Then on seeing the wailing female krounchi bird, compassion haunting him and apperceiving the killing of male bird as unjust, the sage uttered this sentence... [1-2-14]

Oh! Ill-fated Hunter, by which reason you have killed one male bird of the couple, when it is in its lustful passion, thereby you will get an ever-lasting reputation for ages to come... [1-2-15] 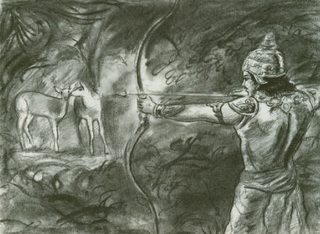 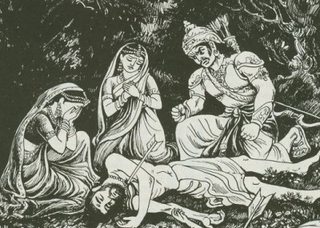 King Pāṇḍu is in the exact same situation as the hunter from Rāmāyaṇa. Only difference is, there, it was a pair of birds and here, it's a couple of deer.

Vaisampayana said, 'O king, one day Pandu, while roaming about in the woods (on the southern slopes of the Himavat) that teemed with deer and wild animals of fierce disposition, saw a large deer, that seemed to be the leader of a herd, serving his mate. Beholding the animals, the monarch pierced them both with five of his sharp and swift arrows winged with golden feathers. O monarch, that was no deer that Pandu struck at, but a Rishi's son of great ascetic merit who was enjoying his mate in the form of a deer. Pierced by Pandu, while engaged in the act of intercourse, he fell down to the ground, uttering cries that were of a man and began to weep bitterly.

mahabharata ramayana valmiki
Share
Improve this question
edited May 23 '18 at 0:48

Well, your main question seems to be that if Pandu knew very well the definition of Dharma when it comes to hunting then why acted in contrary to that?

Then, it happens like that with many people all the time. It happens with the Rishis and also with the Gods.

So, even people, who are well aware of what is Dharma and what is not, end up doing Adharma. It's extremely difficult to pin point any reasons as to why they did so. It can be due to passion, anger or any other Shadaripus.

For example, from Devi Bhagavatam 4.15:

So, in this passage it's describing how several deities, who very well know what is Adharma, still did it. And, here they did those acts out of lust.

Pandu's actions can be similarly explained.

In any case, as Manu Smriti already said, one of the vices for a king to indulge in, is hunting and which brings about his downfall. And, Pandu proved it.

7.46. For a king who is attached to the vices springing from love of pleasure, loses his wealth and his virtue, but (he who is given) to those arising from anger, (loses) even his life

7.47. Hunting, gambling, sleeping by day, censoriousness, (excess with) women, drunkenness, (an inordinate love for) dancing, singing, and music, and useless travel are the tenfold set (of vices) springing from love of pleasure.

So, just like the Moon God did one Adharma being subdued by lust, Pandu did one out of his excessive addiction for hunting. IMO, we can't pinpoint any other reasons neither can we justify his act by citing some rules from the Smritis.

Not the answer you're looking for? Browse other questions tagged mahabharata ramayana valmiki .

10
Did Yudhishthira lie more than once?

5
Did Draupadī cry when Arjuna brought Subhadrā home? What about Kauśalyā and Sumitra in Daśaratha's case?
9
Which was the red sea that the Pandavs visited on their journey to attain Swarga?
3
Why did Krishna punish Yudhishthira for lying after telling him to lie?
5
Why does SB 9.10.9 say that it was Rāma (and not Lakṣmaṇa) that disfigured Śūrpaṇakhā?