What is the story behind this Vishnu - Muchukunda painting?

I keep seeing this picture of a painting on my TV via Google Chromecast. The caption below the pic. reads:

Vishnu Appears to King Muchukunda in a Cave in the Himalayas

What is the backstory of this painting? What are they doing in a cave?

And why does Vishnu look so small compared to Muchukunda? 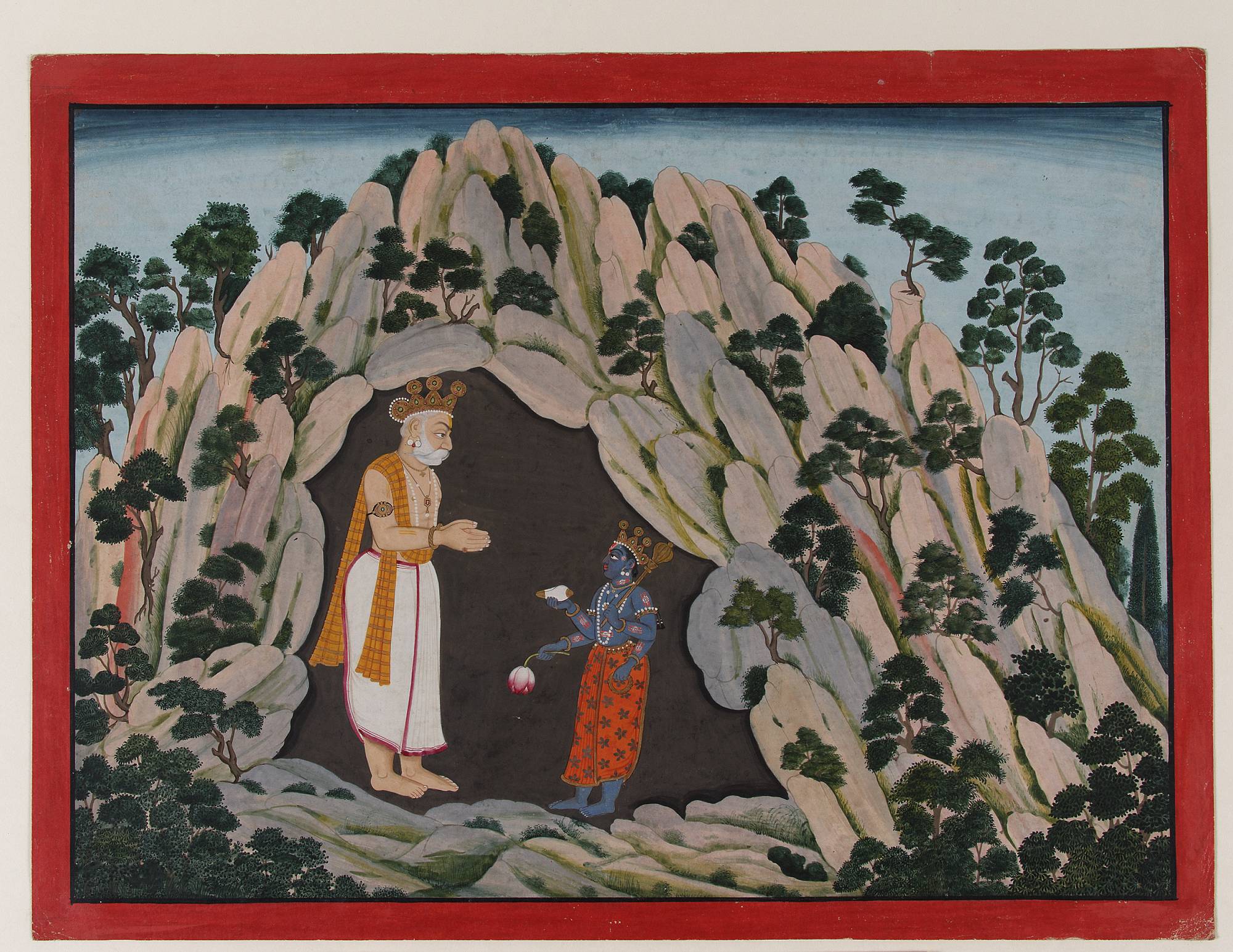 And there is an additional picture that goes along with the painting probably explaining what the painting is all about. Can anyone translate what it's saying? 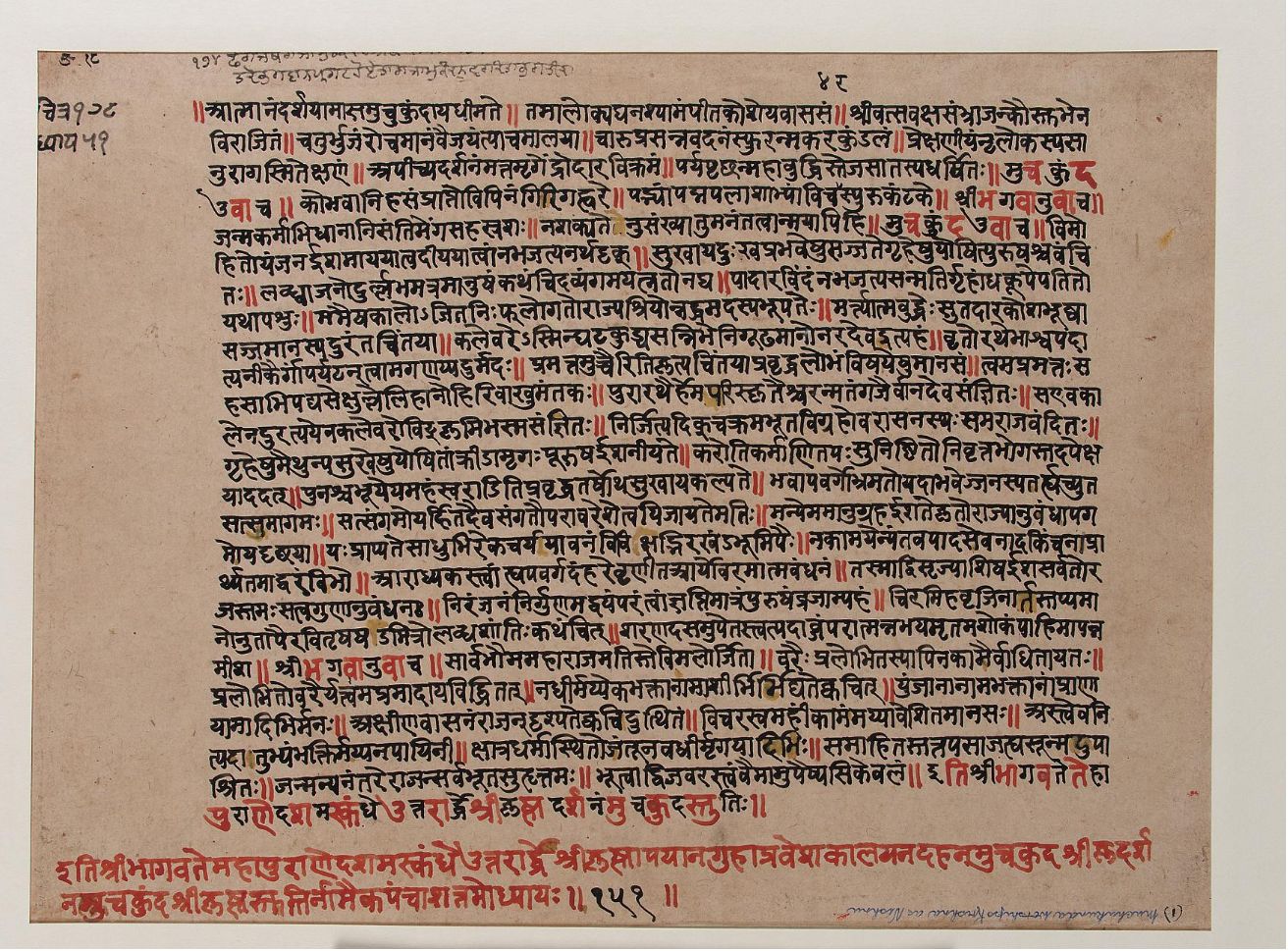 You can find pictures of both the painting and it's caption here:

This painting is painted in mughal style. This depicts the story of Muchukunda meeting Lord Vishnu who was in the form of Lord Krishna. Muchukunda does not recognize Krishna but he realises that the one standing before him is Lord Narayana Himself. There is a mention of him in Bhagavata Purana.

Muchukunda is the son of Ikshvaku king Mandhata and brother of Ambarisha. He is the one who killed a warrior king named Kalayavan who wanted to kill Lord Krishna. Muchukunda was a great warrior and an able commander. He helped the devatas in the war with the asuras. This war was fought for a very long time. Devatas won the war. Quoted from the Srimad Bhagavatam:

After placing His family members safely within the Dvārakā fortress, Śrī Kṛṣṇa went out of Mathurā. He appeared like the rising moon. Kālayavana saw that Kṛṣṇa’s brilliantly effulgent body matched Nārada’s description of the Lord, and thus the Yavana knew He was the Personality of Godhead. Seeing that the Lord carried no weapons, Kālayavana put his own weapons aside and ran toward Him from behind, wanting to fight with Him. Śrī Kṛṣṇa ran from the Yavana, staying just barely beyond Kālayavana’s grasp at every step and eventually leading him a long distance toward a mountain cave. As Kālayavana ran, he hurled insults at the Lord, but he could not grasp Him, since his stock of impious karma was not yet depleted. Śrī Kṛṣṇa entered the cave, whereupon Kālayavana followed after Him and saw a man lying on the ground. Taking him for Śrī Kṛṣṇa, Kālayavana kicked him. The man had been sleeping for a very long time, and now, having been violently awakened, he looked around angrily in all directions and saw Kālayavana. The man stared harshly at him, igniting a fire in Kālayavana’s body and in a moment burning him to ashes.

This extraordinary person was a son of Mandhātā’s named Mucukunda. He was devoted to brahminical culture and always true to his vow. Previously, he had spent many long years helping to protect the demigods from the demons. When the demigods had eventually obtained Kārttikeya as their protector, they allowed Mucukunda to retire, offering him any boon other than liberation, which only Lord Viṣṇu can bestow. Mucukunda had chosen from the demigods the benediction of being covered by sleep, and thus since then he had been lying asleep within the cave.

Upon Kālayavana’s immolation, Śrī Kṛṣṇa showed Himself to Mucukunda, who was struck with wonder at seeing Kṛṣṇa’s incomparable beauty. Mucukunda asked Lord Kṛṣṇa who He was and also explained to the Lord his own identity. Mucukunda said, “After growing weary from remaining awake for a long time, I was enjoying my sleep here in this cave when some stranger disturbed me and, suffering the reaction of his sins, was burnt to ashes. O Lord, O vanquisher of all enemies, it is my great fortune that I now have the vision of Your beautiful form.”

Lord Śrī Kṛṣṇa then told Mucukunda who He was and offered him a boon. The wise Mucukunda, understanding the futility of material life, asked only that he might be allowed to take shelter of Lord Śrī Kṛṣṇa’s lotus feet.

Pleased at this request, the Lord said to Mucukunda, “My devotees are never enticed by material benedictions offered to them; only nondevotees, namely yogīs and speculative philosophers, are interested in material benedictions, having mundane desires in their hearts. My dear Mucukunda, you will have perpetual devotion for Me. Now, always remaining surrendered to Me, go perform penances to eradicate the sinful reactions incurred from the killing you had to do in your role as a warrior. In your next life you will become a first-class brāhmaṇa and attain Me.” Thus the Lord offered Mucukunda His blessings.

After the Yavana was burnt to ashes, the Supreme Lord, chief of the Sātvatas, revealed Himself to the wise Mucukunda.

O King, in your very next life you will become an excellent brāhmaṇa, the greatest well-wisher of all creatures, and certainly come to Me alone.

How did Muchukunda get so much power to kill a man just by his glance?

“The King, exhausted by his labor, then chose sleep as his benediction. He further stated, ‘O best of the demigods, may whoever disturbs my sleep be immediately burned to ashes.’ The demigods replied, ‘So be it,’ and told him, ‘That insensitive person who wakes you in the middle of your sleep will immediately turn to ashes simply by your seeing him.’”

These are the verses to be added between the two lines of SB 10.51.21. These are alternate verses given by Śrīla Bhaktisiddhānta Sarasvatī Ṭhākura for better understanding of the chapter.

There is no mention in the Mahabhagavata that Lord Krishna was shorter than Muchukunda. The mughal style of painting does not literally depict the conditions at that time. E.g: The picture shown at Mahabali wikipedia page. Everyone knows Vamana did not wear a shiny dress like people at Mughal times. I think it is an artistic interpolation just like chaturmukha Brahma shown old, the difference between the heights may be due to two reasons.

Not the answer you're looking for? Browse other questions tagged vishnu art .

5
Why is Lord Kartikeya called 'Devasenapati'?
4
Why did Gods ask Mucukunda to help and lead them in their battle?
0
Where to find the full story of King Muchukunda?