Why doesn't the description of Godavari river match with what the shastras tell us?

The story of the origination of Gautami Ganga is written in Varaha Purana, adhaya 71 as:

Gautama muni asked Lord Shiva for Ganga. Once he received Ganga, Gautama muni poured ganga jal on top of a dead cow and the cow arose. The place where this event took place is called Gautami Ganga or Godavari Ganga.

In Godavari river, our ancestors are known as Apsaroyuga.

Godavari and Bhagirathi originate south and north respectively in Bindagiri from the same mountain.

Arun river (known as Tapi in the shloka) and Yamuna (Barun river) intersect at a place called Gautami Ganga (Gautamitat).

Our current Godavari river is in Maharashtra. But this doesn't match with what the shastras tell us. So where is Godavari?

Note: I do not wish to offend anyone regarding my question. Our current thirthas are as holy regardless of their authenticity and I respect their location. Being a Hindu, I would never disrespect any thirtha just because they do not match with shastras. Many thirthas have changed locations and this is why I try to find their original location. Sorry if I have offended anybody.

The origin of Godawari river is given in Vaman Purana (Chapter 13 , Shloka 30 - Description of Bhuvan Kosha)

Here are the Sanskrit Shlokas-:

So from the above shlokas it's clear that River Godavari flows from Sahya Parvat today's Sahyadri (सह्याद्रि). And according to This It originates in the Western Ghats of central India Near Nashik ,Maharashtra. 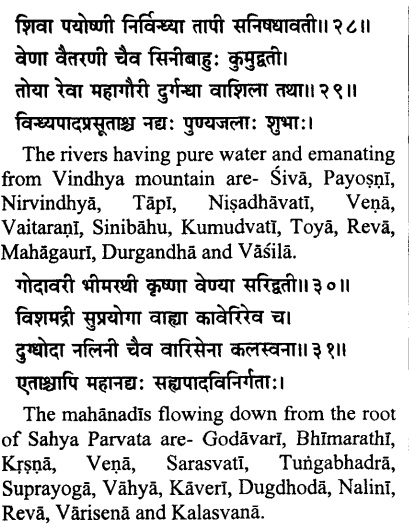 Not the answer you're looking for? Browse other questions tagged puranas history rivers .

26
Complete English translations of Puranas
33
Why did Vyasa depict different Supreme Gods in different Puranas?
11
Story of origin of the Godavari river?
6
What is the story of Trayambakeshwara Jyotirlinga?