Are non-Hindus allowed inside Tirumala Veṅkaṭēśwara Temple? Do they need to sign a waiver?

Note:
1. This is related to but not a duplicate of: Why are non-Hindus not allowed inside temples?
2. I'm looking for credible sources of information, so, no Wikipedia, Quora.com or random blogs in answers please.
3. News articles are ok to cite in your answers provided they actually interviewed TTD management on this.

Yes, Non Hindus are allowed inside the Tirumala Veṅkaṭēśwara Temple. They need to sign a waiver that they have faith in Lord Veṅkaṭēśwara.

This is not a religious restriction. This was passed by the Government of Andhra Pradesh in the April 1990. This had been in vogue for several decades. It was only followed as a tradition and not a rule by only those who volunteered to give the declaration. Now, TTD has made it compulsory for non Hindus to sign a waiver that they have faith in Veṅkaṭēśwara Temple. Preaching other religions in Tirumala especially in the temple premises is illegal.

From a news article from India Today,

According to TTD joint executive officer K S Srinivasa Raju, non-Hindus must necessarily sign the declaration form at the Vaikuntam queue complex before having the darshan of the Lord. Though the practice had been in vogue for several decades, it was only followed as a tradition and not a rule by only those who volunteered to give the declaration.

Now, the TTD authorities have made it compulsory as per the government order (GO MS No. 311 of AP Revenue Endowments-1) under Rule no. 16. "It is now a mandatory rule for all those belonging to various faiths other than Hinduism to sign a declaration form before entering the hill temple stating that they have faith in the presiding deity," Raju said. 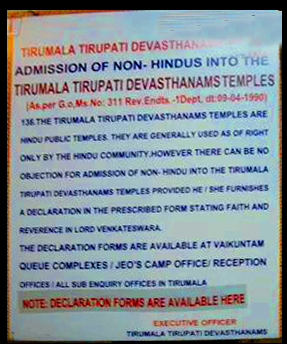 The text in the above image says that the Government order was passed on 09 April 1990. IT might have been there even before this but the devotees used to sign voluntarily.

The rule holds for the temples maintained by Tirumala Tirupati Devasthanams(TTD).

The waivers are available at all sub-enquiry offices, besides the Pushkar and JEO's office at Tirumala.

For the convenience of devotees, the declaration forms would be available at all sub-enquiry offices, besides the Peshkar and JEO's office.

Not the answer you're looking for? Browse other questions tagged temple vaishnavism other-religions venkateshwara tirupati .

4
Why are non-Hindus not allowed inside temples?