Is the object of Putrakāmeṣṭi only a son or a child of either gender?

Is the object of Putrakāmeṣṭi only a son or a child of any gender?

For example, if a couple already have a girl child, can they still perform putrakāmeṣṭi desiring a son?

Any examples from our scriptures where a couple performed putrakāmeṣṭi seeking a son but instead a baby girl was born?

If the object of putrakāmeṣṭi is to just have a child (of any gender), is it a mere coincidence that Daśaratha in Vālmīki Rāmāyaṇa had all male children and no girls?

Besides the famous Putrakameshthi of Ramayan, there are other examples as well in the scriptures and every time it has resulted in the birth of sons.

"Bhishma continued, 'Unto him who pleaded so piteously, Bharadwaja of great energy said, Do not fear! Do not fear! O son of Sudeva, let thy fears be dispelled. I shall perform a sacrifice, O monarch, in order that thou mayst have a son through whom thou shalt be able to smite thousands upon thousands of Vitahavya's party. After this, the Rishi performed a sacrifice with the object of bestowing a son on Divodasa. As the result thereof, unto Divodasa was born a son named Pratarddana.

(BTW Mahabharat also talks about Bharadwaj rishi beng involved in another Yagnya of this kind, the Marut-stoma where King Bharat receives a son.)

Again in the 26th Chapter of the Sahyadrikhanda of the Skanda Purana we come across the following:

Some may doubt that it could be the translator's bias but further verses give us direct proof:

In yet another example from the same book we see:

Again in the legend of Devi Meenakshi's birth, her king Malaydhwaj was advised by Indra to conduct a Putrakameshti for an heir:

This resulted in the emergence of a three-year old girl from the Yagnya Vedi but Malaydhwaj was disappointed since he was expecting a male heir: 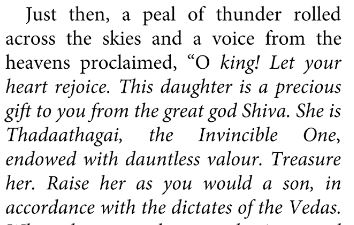 Judging by these examples I would say that the Putrakmeshthi Yagnya was conducted specifically for obtaining Putra not Putri which kind of makes sense since all these kings were looking for heirs for their kingdoms.

Not the answer you're looking for? Browse other questions tagged scripture women dasharatha gender .

9
Is it necessary for one to have children?
9
Why virginity of only women is stressed upon in Hindu scriptures? Is men's virginity not required during marriage?

8
What was the true reason behind the practice of Child Marriage?
5
Which Upanishadic verse says that the very object of pleasure/beauty will turn into a object of pain or frustration?
6
Why is Bhagavad Gita the only the Granth whose jayanti (birthday) being celebrated?
10
Why Gayatri mantra is widely recited by non-bramhins nowadays which was once the stronghold of only the brahmins?
4
Which puran describes about the curse of kashyap rishi by which Shiva had to behead his son?
2
Is the hierarchy of the precedence of testimony only dependent on the category of scripture?
2
What's the implication on gender dynamics of Bhagavat Gita 9.32 interpreted according to Dvaita in Mahabharata Tatparya Nirnaya by Shri Madhwacharya?