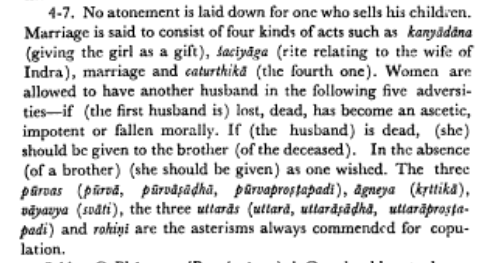 10
Is there any provision for 'Divorce' in Hindusm?
3
Is it sin for a man to marry a widow?
2
Does Hinduism believe divorce and remarriage is moral?
1
Does the concept of divorce exist in hinduism?
10
Why virginity of only women is stressed upon in Hindu scriptures? Is men's virginity not required during marriage?
6
Was widow re-marriage prevalent in Mahabharata?
6
Did Rāmānuja abandon his wife? If yes, on what grounds?
6
Any examples of remarried widows (punarbhū) in Hindu scripture?
4
Are there any instances in scriptures of husband & wife separated AND remarried, because of reasons accepted by shastras?
5
Can a non-virgin woman marry? If yes, how?
See more linked questions

12
Which Shastras are more authoritative,the Smritis(Dharma Shastras) or the Puranas?
15
What scriptures other than Dharma Sindhu say sins are stored in hair?
13
How can one save Sanatana Dharma?
6
Is BG 16.23 referring to Vedas or dharma śāstras?