Description of seasons in Hindu Scriptures

We know that environment has considerably changed comparatively to 20th century and is changing todays. We sometimes hear the discussion of our elders about systematic environments/seasons of 50-100 years before.

So, I just thought whether the description of seasons (viz. winter, summer & monsoon) had nicely described in any ancient scriptures? so-that we can get the imagination of seasons in ancient times!

I've found one related question: How Monsoon Season or Rainy Season (वर्षा ऋतू) has been described in Ancient scriptures of Hinduism?

So, How the seasons are described in Hindu scriptures?

We find interesting and very fine details about seasons in these Purnas .Like they are describing how Sun ,Moon ,Clouds , Winds , Farmers ,Insects , Grass ,flowers were in those seasons , and how Shree Krishna himself enjoyed those seasons with his friends.

Then the rainy season began, giving life and sustenance to all living beings. The sky began to rumble with thunder, and lightning flashed on the horizon.SB 10.20.3

The sky was then covered by dense blue clouds accompanied by lightning and thunder. Thus the sky and its natural illumination were covered in the same way that the spirit soul is covered by the three modes of material nature.SB 10.20.4

The newly grown grass made the earth emerald green, the indragopa insects added a reddish hue, and white mushrooms added further color and circles of shade. Thus the earth appeared like a person who has suddenly become rich.SB 10.20.11

Free of clouds and filled with clearly visible stars, the autumn sky shone brilliantly, just like the spiritual consciousness of one who has directly experienced the purport of the Vedic scriptures.SB 10.20.43

Except for the gopīs, whose hearts had been stolen by Kṛṣṇa, the people could forget their suffering by embracing the wind coming from the flower-filled forest. This wind was neither hot nor cold.SB 10.20.45

By the influence of the autumn season, all the cows, doe, women and female birds became fertile and were followed by their respective mates in search of sexual enjoyment, just as activities performed for the service of the Supreme Lord are automatically followed by all beneficial results. SB 10.20.46 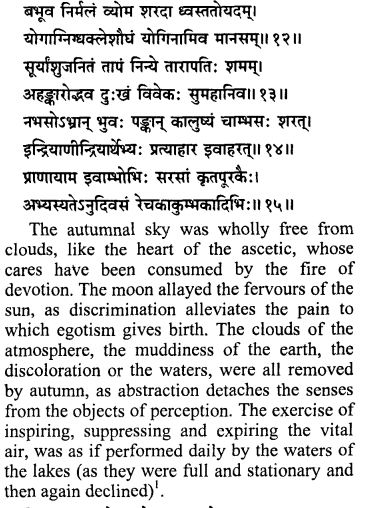 Not the answer you're looking for? Browse other questions tagged scripture puranas .

8
How Monsoon Season or Rainy Season (वर्षा ऋतू) has been described in Ancient scriptures of Hinduism?