Above is a beautiful shloka written in the prayer of Lord Vishnu. I thought it was in Shri Ramcharitmanas and Shri Tulsidas ji was the author of this shloka but I was wrong. Please tell me the source of this shloka.

The three Sahsranama stotrams dedicated to Lord Vishnu are found in Padma Purana,Skanda Purana and the Mahabharata.They are together called the "Trividha Vishnu Sahasranamams".Similarly,for Shiva we have "Chaturvidha Sahsranamams" but from Agama Texts we have many more.

Anyways,the verse in question appears within the Dhyana Sloka of the Vishnu Sahasranama that is from the Anushasanika Parva of Mahabharata.

Also, as you can see from the passage given below, that Vyasa is mentioned as the Rishi of the stotram so Vyasa only is the author of those verses.

May Bhagavan Mukunda purify us as he is seated on the Ocean of Milk in the surroundings of sand that reflects the illumination of precious gems while wearing garlands of pearls transparent like crystals and adorned with Gada-Shankha-Chakra-Padma besides smiles of blissful trance showering rains of nectar from pure clouds over head on the blue skies; I salute Vishnu with admiration and deep veneration as He his physique representing the Three Worlds apppears as though Earth is His Sacred Feet, Sky His Navel, Air as His breathing, Sun and Moon as His eyes, Dishas or Directions as His ears, Heaven as His head, Fire as His Countenance and Oceans as His stomach. I salute Vishnu who contains the Universe in totality with Devas, humanity, birds, cattle, snakes, Gandharvas, Demons and so on all of whom act and play in their own ways and means. I salute to and prostrate before Vishnu who is the Paramount Power in all the Lokas as He is the embodiment of Peace and Tranquility resting comfortably on Sesha Naaga as Padmanabha or with a Lotus sprouted from his naabhi, Suresha or the Over Lord of Sura Ganas, Vishwaakaaram or the Divine Profile of Vishwa or the Universe, Gagana Sadrusham or like the most undefinable Skies, Neela Varnam or of Blue complexion and Shubhangam or of the most auspicious Physical Frame; Lakshmi Kantam or the family partner of Devi Lakshmi; Kamala nayanam or of the enticing eyes of Lotus; Yogi hriddhyaana gamyam or the Ultimate Goal of the heart-felt meditation of Yogis; Bhavabhayaharam or the Single Saviour of the Dread and Distress of Life’s Travails and the Unique Chief of all the Lokas; Bhagavan is also renowned for His Physique of Cloud-like Blue Complexion, His abode as the Ocean of Milk or dressed in yellow robes, Shri Vatsa mole on his Chest, the bright Koustubha Mani on his body, Punyopetam or surrounded by devotees and Dharmaatmas and of Lotus Eyes. Bhagavan is famed as the ever-adorned with Shankha-Chakra-Kireeta-Kundala-Yellow robes, Lotus like vision, Sacred and glitttering neck laces on chest and the outstanding Koustubha all decorated on his Four Mighty Hands! Indeed to that unparalleled Bhagavan Vishnu, my sincere salutations and Prayers

Here is another link for the Vishnu Sahsranama Stotram from Mahabharata:

You can read the Dhyanam part from page 3 onwards and on page 5 we get the verses in your questions: 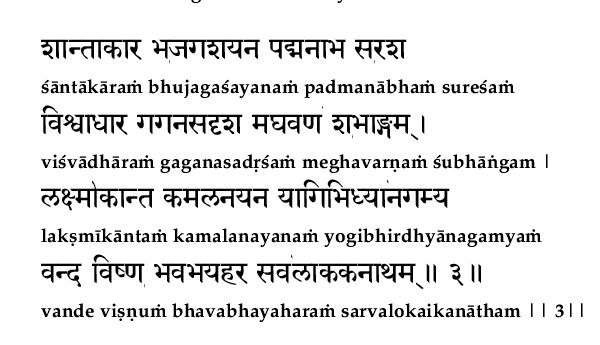 I'm unable to copy sanskrit verses from that document hence given the image as a reference.

Not the answer you're looking for? Browse other questions tagged scripture vishnu prayer resource .

14
What is the source of this famous verse?

6
Who had the first priority in getting Moksha in the 'Gajendra Moksha' story, the crocodile or the elephant Gajendra?
3
What is the correct source of this verse?
4
Where is it written that Ramakrishna Paramahamsa was an incarnation of Lord Vishnu?
24
Are there any scriptures that portray Lord Rama to be the source of all incarnations including Lord Vishnu?
5
Is it true that lord Vishnu gave his own eye to lord Shiva?
8
What is the dharma behind Lord Vishnu in killing of sage Bhrigu's wife?
5
Was Rama Avatar of Vishnu or Brahm?