Which scriptures describe the chariot of Sun God?

The sun God who is mounted on a chariot driven by seven horses, the resplendent one, the son of sage Kaśyapa, holds a white lotus in the hand, I offer salutations to Him.

The above is one of the eight verses of Surya Ashtakam, a stotra on Aditya. It is said that the chariot has only one wheel and is pulled by seven horses. Anūra drives the chariot.

Many artists and some sites say that the seven horses indicate the colors of a rainbow i.e., VIBGYOR. 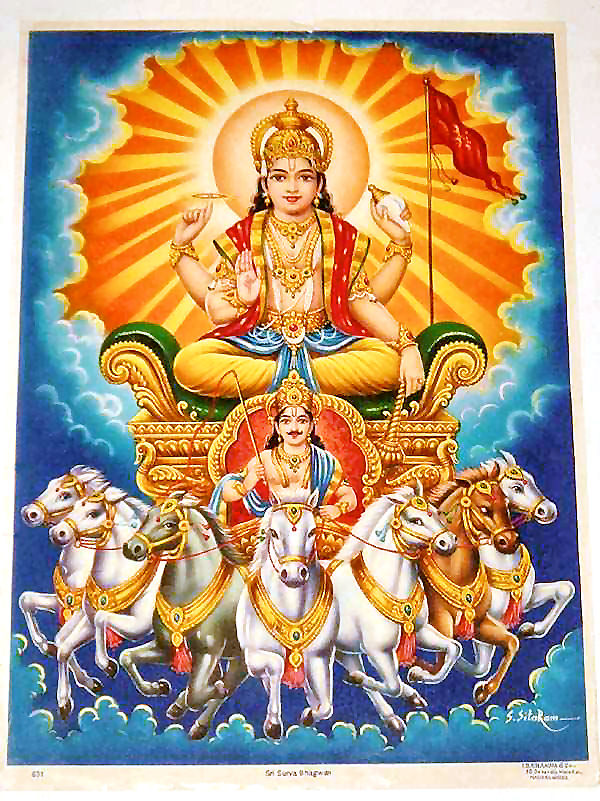 It is described in Srimad Bhagavat Purana.

Srimad Bhagavat Purana Canto 5, Chapter 21 describes The movement of Sun and it's Chariot.

SB 5.21.13 — The chariot of the sun-god has only one wheel, which is known as Saṁvatsara. The twelve months are calculated to be its twelve spokes, the six seasons are the sections of its rim, and the three cātur-māsya periods are its three-sectioned hub. One side of the axle carrying the wheel rests upon the summit of Mount Sumeru, and the other rests upon Mānasottara Mountain. Affixed to the outer end of the axle, the wheel continuously rotates on Mānasottara Mountain like the wheel of an oil-pressing machine.

SB 5.21.16 — Although Aruṇadeva sits in front of the sun-god and is engaged in driving the chariot and controlling the horses, he looks backward toward the sun-god.

You can refer srimadbhagavatam.org for alternative English translation:

(13) This vehicle has only one wheel with twelve spokes [the months], six segments [the seasons] and three pieces to its hub [four month periods], which in its entirety is known as a solar year [a samvatsara]. Its axle is fixed on the top of Meru with Mânasottara at the other end. The wheel of the chariot of the sun being fixed there rotates to the mountain range of Mânasottara like a wheel of an oil press machine.

(14) Fixed to the base of that axle there is a second one which, like with the axle of an oil press machine, measures a quarter of its length. Its upper portion is fixed to Dhruvaloka [the center of the stars].

(15) The inside of the vehicle measures 3.6 million yojanas long and a quarter of that distance wide, it is pulled by seven horses named after the Vedic meters [Gâyatrî, Brihati, Ushnik, Jagatî, Trishthup, Anushthup and Pankti] that, in order to carry the god of the sun, by Arunadeva are harnessed to a yoke as wide as the vehicle [the actual diameter of the sun itself is 1.392 million kilometers].

(16) Even though Aruna, fulfilling his duties as the charioteer, sits in front of the sun god, he looks backward [not to show disrespect].

1.OF this benignant Priest, with eld grey-coloured, the brother midmost of the three is lightning. The third is he whose back with oil is sprinkled. Here I behold the Chief with seven male children.

2 Seven to the one-wheeled chariot yoke the Courser; bearing seven names the single Courser draws it. Three-naved the wheel is, sound and undecaying, whereon are resting all these worlds of being.

3 The seven who on the seven-wheeled car are mounted have horses, seven in tale, who draw them onward. Seven Sisters utter songs of praise together, in whom the names of the seven Cows are treasured.

The Vishnu Purana: There is in Chapter VIII of Book II which is dedicated to the description of the sun and his chariot:

The chariot of the sun is nine thousand leagues in length, and the pole is of twice that longitude; the axle is fifteen millions and seven hundred thousand leagues long; on which is fixed a wheel with three naves, five spokes, and six peripheries, consisting of the ever-during year; the whole constituting the circle or wheel of time. The chariot has another axle, which is forty-five thousand five hundred leagues long.

The two halves of the yoke are of the same length respectively as the two axles (the longer and the shorter). The short axle, with the short yoke, are supported by the pole-star: the end of the longer axle, to which the wheel of the car is attached, moves on the Mānasa mountain. The seven horses of the sun's car are the metres of the Vedas, Gāyatrī, Vrihatī, Uṣṇih, Jayatī, Tṛṣṭubh, Anuṣṭubh, and Pankti.

Interesting side-note, chapter 12 of the same book describes the moon and the moon’s chariot.

The Markandeya Purana: chapter 107 (Hymn to the Sun) has a small reference to the Sun’s chariot:

O Sun, so that thou shinest exceedingly with masses of light that calls the three worlds into life. Mounting thy equally proportioned chariot that sways about gracefully and is widely pleasing, with horses that are ever unwearied, O adorable god, thou coursest the broad world for our good.

“At that moment Kadru and Vinatā, the two co-wives of Kaśyapa saw the horses yoked in the chariot of the sun and thus argued with each other :-- Kadru, seeing the sun’s horse, first asked Vinatā “O good one! Tell me soon, what is the colour of this horse?” Vinatā said :-- “O auspicious one! What do you think?” I said, the colour of the horse is white; you also better say before hand what is its colour? We will then lay a wager (and challenge).

Thus saying, Kadru told her sons that were obedient :-- “Cover by your bodies all the pores of the body of the horse of the chariot of the Sun, so it may look black; go and do it.” At this some snakes replied “That cannot be.”

And in the same text is a more descriptive chapter on the movement of the chariot of the sun (book 8, chapter 15):

O Nārada! The Moon and the other planets and stars rise and set in the aforesaid manner. Thus the powerful chariot of the Sun travels in a Muhūrta 142,00000 Yojanas. By the force of Pravaha Vāyu (air), the Sun God, the Incarnate of the Vedas travels round the cities, the Zodiac, in one Samvatsara (year). The wheel of the Sun’s Chariot is one year; twelve months are the spokes; three Cāturmāsyas are the nave and the six seasons are the outer ring or circumference of the wheel. The learned men call this chariot as the Samvatsara (one year). The axis or axle points to the Meru on one side and to Mānasottara mountain on the other. The end or circumference of the wheel marks off other divisions of the time as Kalā, Kāṣṭhā, Muhūrta, Yāma, Parahara, day and night, and fortnights. The wheel is fixed on the nave. The Sun goes on this wheel, like an oilman’s on his oil-machine, round and round the Mānasottara mountain. The eastern side of the wheel is on that axis and the other part is fixed on the Pole Star. The dimension of the first axis is (15750000 Yoyanas). The second axis measures one-fourth of the above (3937500 Yoyanas). It resembles the axis of an oil-machine. The upper side of that is considered to belong to the Sun. The seat of the Sun on his chariot measures 36 Lakh Yoyanas wide. The Yuga measures in length one fourth of the above dimensions, that of his seat. The Chariot is is moved by seven horses, consisting of the seven Chandas, Gāyatrī, etc., driven by Aruṇa. The horses carry the Sun for the happiness of all. Though the charioteer sits in front of the Sun, his face is turned towards the west. He does his work as a charioteer in that state.

And about the colour of the horses, Aaditya hrudayam of Valmiki Ramayana describes them to be yellow in colour.

Hari refers to yellowish hues that could be greenish too. But since it's Sun, I'm assuming yellow to be the meaning of hari.

Not the answer you're looking for? Browse other questions tagged surya vedic-gods .

4
Why Revantha the youngest Son of Sun god went to Vishnu's abode?
4
What are the name of Hindu months based on Sun-god?
2
Hindu scriptures say Sun moves in a Chariot pulled by horses. What does this mean?
14
Which scriptures or Vedic hymns declare the Sun as the Supreme God (Brahman)?
7
What are the seven rays of the sun?
4
When the Sun was lost?
7
What is the difference between Sun and Sun God?
2
How was Sun created as per Vedas? Anyway to reconcile the different creation accounts?