Who are Naman and Murkalan as referred to in Thirumaalai Pasuram?

The Alwars (also spelled Azhwars) are a group of 12 ancient Vaishnava saints who lived in Tamil Nadu and are famous for their devotional poetry in praise of Vishnu. One of the alwars is Sri Thondaradippodi Azhwar. In his lifetime, he composed two hymns Thirumaalai and Tiruppalli Ezuchi in the dedication of Lord Ranganatha.

In Thirumaalai Pasuram of Sri Thondaradippodi Azhwar, there is a verse (snapshot below) that discusses how the denizens of Naraka upon listening to the auspicious discussion between Naman and Murkalan got elated as if they are in Swarga. Click here for a verse-by-verse translation of Thirumaalai Pasuram in english, the verse in the snapshot is the 12th verse, here is the referenced translation of the same:

My heart indeed goes out to the unfortunates who fall into purgatory swayed by false tenets without realizing that the very mention of the name of the Lord whom residence in Sri Rangam, will redeem. Is it not that Hell was transformed to Paradise when Yama was heard to explain that mention of Krishna’s name was reason for Mudgala’s salvation? 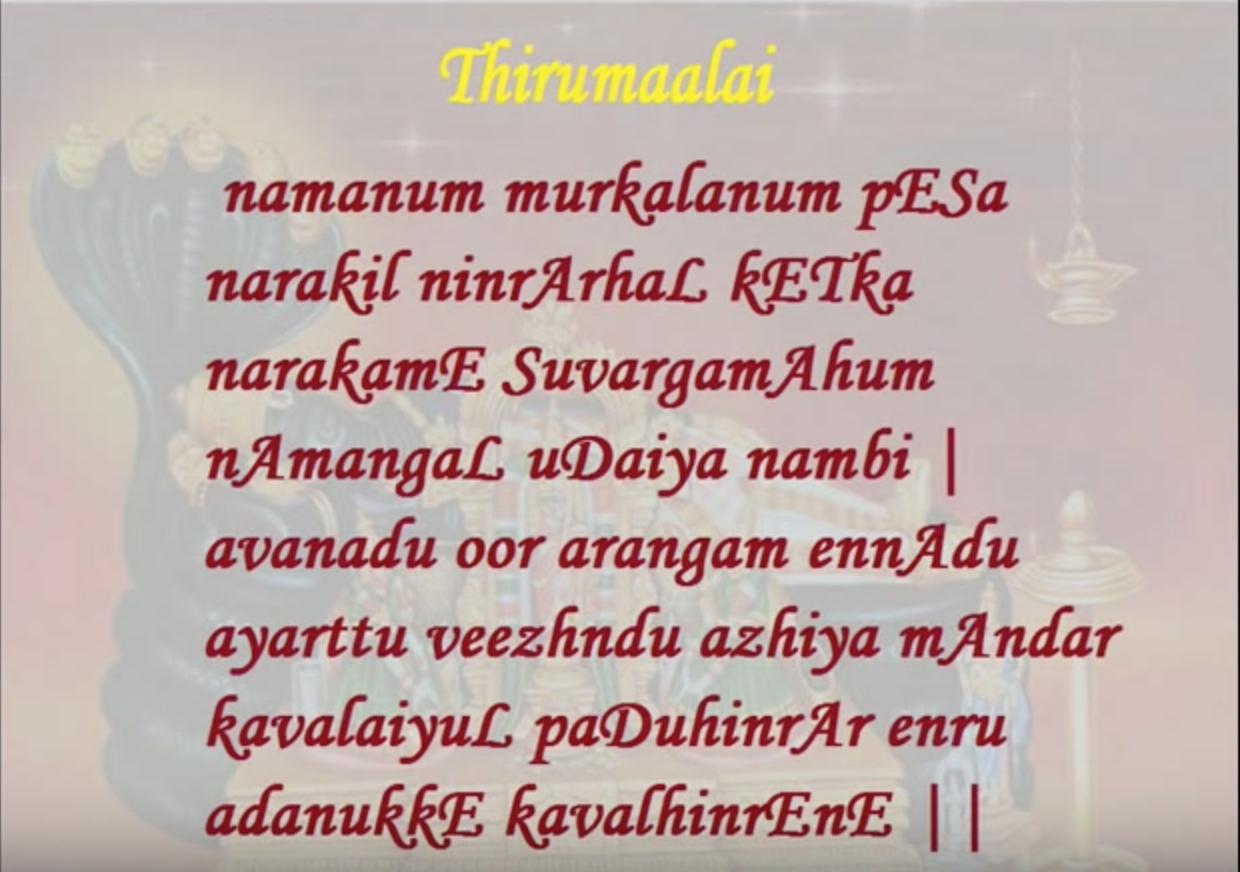 Naman referred to in the pāsuram is Yama Dharmaraja. Murkalan or Mudhgala is a person belonging to ancient times who got a warm welcome from Yama Dharma Raja.

Why did Azhwar sing this verse?

In ancient times, there was a person by name Mudhgalan. He was constantly indulging in vices. Once, to atone for his sins, he gifted a cow made of sesame (तिल). At the time of giving the gift, he said Kriśṇārpaṇam and gifted it. After he died, he was dragged by the servitors of yama to hell. yama welcomed him which surprised mudhgalan. He told yama "your followers are dragging me here and you are welcoming me and treating me well. What is the reason for this?" yama replied "neither my followers nor you know your greatness. Once you said Kriśṇārpaṇam and it is because of that, I am welcoming you and treating you nicely" explaining the greatness of reciting Sriman Nārāyaṇa’s divine name. As these two people were discussing the greatness of divine names, those who were suffering in hell heard this. As they were hearing, the troubles in hell disappeared for them and they felt as if they were enjoying in heaven. This anectode is given in Viśṇu dharmam. AzhwAr is quoting this incident in this pāsuram.

This change was the result of the greatness of the names. Even though it is Sriman Nārāyaṇa who grants the fruits of effort, since he gives that only after divine names are recited, it is not out of place to state that it is the divine names that brought about the change [from hell to heaven].

Quoted from this page.

Not the answer you're looking for? Browse other questions tagged scripture vaishnavism sri-vaishnava alwar .

2
What happened to the sinner Kshatrabandhu after he chanted Govinda?

12
What is the secular account of the compilation of the Alwars' poems?
14
What scriptures describe Krishna's lover Nappinnai?
9
Which Alwars mention the gods whom they're incarnations of?
2
What happened to the sinner Kshatrabandhu after he chanted Govinda?
7
Is Dramidacharya the same as Thirumazhisai Alwar?