What are the Hindu Code of Conduct (Ethics)?

Codes of Conduct or Ethical codes are very essential norms, rules and values that guides the right living practices and standard behaviour for individual as well as social welfare.

So, I want to know what are the Codes of Conduct (Ethics) or Ethical Codes of Hinduism?

In Santana Dharma, the "right way of living" is preached in many scriptures. Actually the Sanskrit word "Dharma" itself stands for similar meaning.

Ethics (Ethical code or Code Of Conduct) are taught in various ways in Hindu Scriptures like as Divine Commandments in Vedas-Upanishad, Bhagavad Gita. In terms of Yama (यम) & Niyama (नियम) in Smriti literatures ("Dharma Shashtra") and in Yoga.

For the better understanding and explanation it is recommended to go through scripture or books on this topic. Also note that no. of Yama and Niyama may change according to different scripture, above is the most adopted or significant code of conduct in Hinduism universally.

Following are some useful pages/articles you may visit: 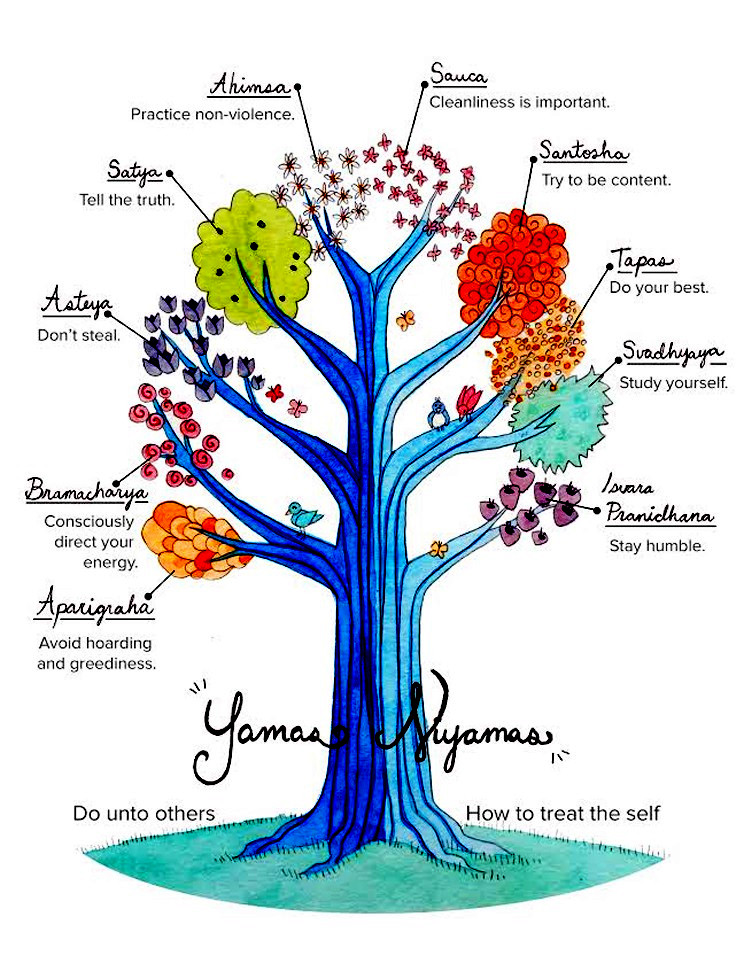 Related: What are the canonical texts in Hinduism for morality and ethics?

There is already a discussion on ethics and morality in a related question, 'What are the canonical texts in Hinduism for morality and ethics?'. Here are some additional teachings.

Bhishma said, ‘Knowing how painful it is to himself, a person should never do that to others which he dislikes when done to him by others.’

Tuladhara said, ‘…Men are seen to own men as slaves, and by beating, by binding, and by otherwise subjecting them to restraints, cause them to labour day and night. These people are not ignorant of pain that results from beating and fastening in chains. In every creature that is endued with the five senses live all the deities, Surya, Chandramas, the god of wind, Brahman, Prana, Kratu, and Yama (these dwell in living creatures). There are men that live by trafficking in living creatures!

Bhishma said, ‘…One should not make distinction between one’s guests and attendants and kinsmen in matters of food. Equality (in this respect) with servants is applauded.’

A wife should never be purchased. Nor should a father sell his daughter. Only those persons of sinful soul who are possessed, besides, by cupidity, and who sell and purchase female slaves for making serving women, regard the status of wife as capable of arising from the gift and acceptance of a dowry.

Bhishma said, ‘They who betake themselves to improper conduct, they who take exorbitant rates of interest, and they who make unduly large profits on sales, have to sink in hell.

Tuladhara said, ‘O Jajali, I know morality, which is eternal, with all its mysteries. It is nothing else than that ancient morality which is known to all, and which consists of universal friendliness, and is fraught with beneficence to all creatures. That mode of living which is founded upon a total harmlessness towards all creatures or (in case of actual necessity) upon a minimum of such harm, is the highest morality.

Need to feel for the afflicted

I abide in all beings as their inner-most soul. Disregarding My presence within them, men make a show of worshiping Me through images. If one disregards Me present in all as their soul and Lord but ignorantly offers worship only to images, such worship is as ineffective as a sacrificial offering made in ashes. A man who persecutes Me residing in others, who is proud and haughty, who looks upon God as the other – such a person will never attain to peace of mind. If a man disregards and persecutes fellow beings, but worships Me in images with numerous rituals and rich offerings, I am not at all pleased with him for proffering such worship. A man should, however, worship Me in images, side by side with discharging his duties, which include the love of all beings, until he actually realises My presence in himself and in all beings. As long as man is self-centred and makes an absolute distinction between himself and others (without recognizing the unity of all in Me, the Inner Pervader), he will be subject to the great fear of Death (including every form of deprivation of self-interest). So overcoming the separateness of a self-centred life, one should serve all beings with gifts, honour and love, recognising that such service is really being rendered to Me who reside in all beings as their innermost soul.

Moral guidelines for the Righteous

Yudhishthira said, ‘Abstentions from injury, the observances of the Vedic ritual, meditation, subjugation of the senses, penances, and obedient services rendered to the preceptors - which amongst these is fraught with the greatest merit with respect to a person?’

Vrihaspati said, ‘All these six are fraught with merit. They are different doors of piety. I shall discourse upon them presently. Do thou listen to them, O chief of the Bharatas! I shall tell thee what constitutes the highest good of a human being. That man who practices the religion of universal compassion achieves his highest good. That man who keeps under control the three faults, viz., lust, wrath, and cupidity, ,,, (and practises the virtue of compassion), attains to success. ……. That man who regards all creatures as his own self, and behaves towards them as towards his own self, laying aside the rod of chastisement and completely subjugating his wrath, succeeds in attaining to happiness. ….One should never do that to another, which one regards as injurious to one’s own self. This, in brief, is the rule of righteousness.

Most Smriti Texts mention about such ethical conducts. I am here quoting from the Atri Smriti.

A really accomplished person does not try to suppress another's merit : he praises another's accomplishments ; he does not laugh at another's shortcomings ; [such a spirit] is called Anasuya (want of jealousy).

Renunciation of forbidden food, association with those who are not badly spoken of, and abiding by good conduct is spoken of as S'oucha (purity).

To follow good conduct always and to renounce a bad one, has been described as Mangala by the 'R.ishis well-read in Religious Codes. (36)

One should not do, to an excess, what afflicts the body, whether good or bad. This is called Anayasa (want of exertion). (37)

One should be contented with all articles, whenever what arrives ; one should not long for another's wives ; this is called Aspriha (want of desire). (38)

If external or spiritual pain is created by others, and one is not offended and does not wreak revenge, it (i.e., the spirit) is called Dama. (39

Even from a limited income, something should be given away daily with care and liberal spirit. This is called Dana (charity). (40)

One should behave, like his own self, towards others, his own relations and friends, him who envies him, and an enemy. This is called Daya (mercy). (41)

Sanatana Dharma does not have a single code of conduct that is universally and comprehensively applicable to all human beings. It recognizes the basic reality that people are different in their temperament, abilities, desires, station in life etc. and prescribes codes of conduct based on a fundamental principle of Adhikaara - or competence (qualification).

There are two basic sets of dharma - based on Adhikaara: Saamanya Dharma - ordinary rules and visesha dharma or special rules. The Yama and Niyama principles outlined above are Visesha Dharma applicable to people who are seeking Moksa or liberation from the cycle of birth and death.

Saamanya Dharma is outlined in many places, particularly in the Upanishads where it says to the student entering adulthood:

"Speak the truth; Perform charitable acts; perform your (prescribed) duties; ... treat your mother, father, teacher and guests in your home as though they were Isvara (God); "

There are other such guidelines and exhortations on leading an ethical life as the child becomes an adult and enters the Asrama of the householder.

Ahimsa is not a universal guideline in sanatana dharma. For instance, the King is not bound to Ahimsa as commonly understood as eschewing all violence. In its subtle meaning, Ahimsa refers to unjust violence as in violence towards the defenceless.

In this framework, hunting an adult deer is OK but not the hunting of a baby or a female deer looking after young ones. A King is allowed to visit punishment, including capital punishment, on the guilty after a fair trial, but not violence towards the children of the person so condemned.

In all cases, Adhikaara or qualification is a fundamental principle of Sanatana Dharma.

First, let me say that I'm saying this with very limited experience of Hindu scripture. My experience is mainly based on a "general feeling" I have gathered, and also from watching lectures and talks on e.g. YouTube. It could be that those speakers are not Hindu, but rather New Age. Anyway, the question made thoughts pop up in my head. Let me share those thoughts, and I would like to ask for feedback from the community if I'm on the right track. So here is goes.

There is no code of conduct. There doesn't have to be one. Instead, we are taught to live our lives rooted in yoga. In my understanding, this means to continuously do conscious actions to dissolve our egos, listen to our hearts, and align everything that goes on inside us with the universe around us.

If we do this, we don't need a code of conduct or a "judge" to tell us what to do and what not to do. It will come naturally. We can do whatever we want and whatever we feel, because our feelings will actually point us in the right direction. Acts such as killing and stealing will be very unnatural. If a person lives their life in touch with themselves and in harmony with their community and the universe around them, it is very unlikely for that person to want kill someone or want to steal something from someone.

We could deceive ourselves to think that we want to steal something from someone for personal gain. But that's not our sacred selves talking, it is just our egos. If we can manage to dissolve it and live in harmony with what goes on around us, we will not have such thoughts.

Not the answer you're looking for? Browse other questions tagged scripture practice dharma ethics .

29
What are some online sources to get unabridged Hindu Scriptures or to learn Hinduism?
0
Do the Vedas have 'commandments' similar to the bible? (E.g., does it forbid murder?)
5
What are the canonical texts in Hinduism for morality and ethics?

22
What are the Hindu scriptures which every Hindu should abide by?
5
Are Sanatan Dharm and Hindu Dharm synonymous terms? If not, what is the difference between the two?
6
Which text(s) detail the ethics of how to treat beings lower than Man?
3
How sexual relations with multiple partners affect us? What are after effects of promiscuity?
10
What do Hindu scriptures say about gambling?
4
Are Hindu scriptures pro- or anti-dowry?
6
Is it ok to paint Hindu deities even though you are another faith