What is the Balatibala Mahamantra which was taught to Rama by Sage Vishwamitra?

In Ramayana we see that Sri Vishwamitra imparted a special mantra called "balA-atibalA" to Sri Rama and Lakshmana which is considered to be immensely helpful in both spiritual and materialistic domains.

What is this mantra and what is its significance?

This mantra is very powerful and it looks like gAyatri mantra. It has additionally some beejas and other words hence it is a very long mantra. It is capable of slowly making one evolve to higher spiritual level of super-consciousness and helps one to go beyond the pull of lower forces.

We find its mention in Valmiki Ramayana when sage imparted this knowledge to Sri Rama and Lakshmana.

"My dear Raghava, if bala atibala hymns are practised, oh, impeccable one, none can equal you in the world by your handsomeness, calibre, erudition, by your discernment, and even in replying or rebutting you. [1-22-14b, 15]

"On receiving these two teachings there will be none similar to you, for bala and atibala are the mothers of all knowledge. [1-22-16]

"Oh, best one among men, Raghava, if you go on reciting bala and atiblala hymns, my dear Rama, there will be no hunger or thirst to you. [1-22-17]

Rama, the one with marvellous valiance, on obtaining those teachings performed all his duties of a student in respect of a teacher and then shone forth like the thousand rayed sun on a cloudless sky of autumn. Then those three very happily stayed on the riverbank of Sarayu for that night. [1-22-21b, 22] 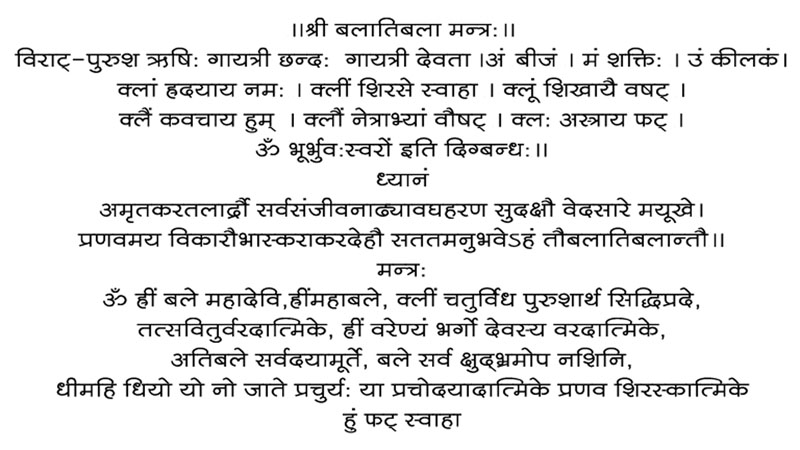 Not the answer you're looking for? Browse other questions tagged ramayana rama gayatri-mantra vishwamitra .

5
Are Bala and Ati Bala mantras different from and superior to Gayatri mantra?

7
What is the earliest reference to Vāsudeva as a name of Vishnu?
15
Was the story of adultery of Indra in the story of Ahalya a PRAKSHIPTA?
3
Who prescribed sanjivani when Lakshmana became unconscious?
2
What is the specialty of Rama Rajya?
3
Who taught archery and other weapons skills to Lord Rama?
3
How did Rama kill Rakshasa Viradha even though the latter had a boon that no weapons can harm him?
7
Why did the Sea God (Samudra) not yield to Lord Rama when he was however, willing to help Hanuman using Mainaka?