Is Goddess Brahmacharini an avatara of Mata Durga?

The second day of Navaratri is observed on the Dwitya Tithi. On this day Goddess Brahmacharini is worshiped.

No, not an avatara. Brahmacharini is one of the 9 forms of Devi Durga.

Sailaputri-adi 9 forms of Goddess Durga is collectively known as the Navadurgas. They have been defined in the beginning verses of the Devi Kavacham which is found in the Devi Mahatyam, which in turn is a part of the Markandeya Purana.

Devi Kavacham is recited as a part of reciting the Durga Saptashati or the Chandi Patha. The viniyoga of this Kavacha is as follows:

For the Devi Kavacha Brahma is the Seer, Anushtup is the Meter,Chamunda is the Deity, & for the appeasement of Devi and as a part of Chandipatha its recited.

Rishi Markandeya asked Lord Brahma for a Kavacham(an armour like mantra) that is highly auspicious but very secret and which has not been hitherto told by anyone to someone too.

Hey Vipra, Devi's Kavacham is very secret and auspicious and is beneficial for all beings.Hey Mahamuni, listen:

Then Lord Brahma defined the 9 forms of Devi Durga as follows :

These 9 names as told by Lord Brahma are known as the Navadurgas ; Sailaputri, Brahmacharini, Chandraghanta, Kushmanda, Skandamata. Katyayani, Kalaratri, Mahagauri and Siddhidatri (or Mokshada).

In this form Goddess Durga is having only two arms, she is wearing white clothes,having rudraksha rosary beads mala in her hand. She is also calm,extremely religious and in a meditative mood.

In the Brahmacharini form Goddess Durga resembles Goddess Parvati who was then doing a severe Tapasya (penance) for getting Lord Shiva as her consort.

Some useful info of Devi's Brahmacharini form is also obtained from this site:

Navratri Worship - Goddess Brahmacharini is worshipped on the second day of Navratri.

Governing Planet - It is believed that Lord Mangal, the provider of all fortunes, is governed by Goddess Brahmacharini.

Iconography - Goddess Brahmacharini is depicted as walking on the bare feet. She has two hands and She carries Jap Mala in the right hand and Kamandal in the left hand.

Details - Goddess Brahmacharini did severe penance to get Lord Shiva as her husband. She performed hard austerity and due to which She was called Brahmacharini. 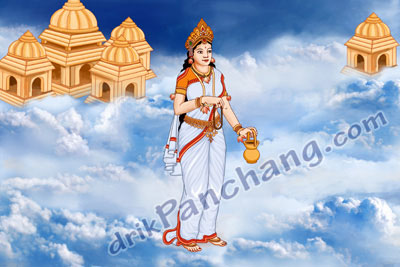 Not the answer you're looking for? Browse other questions tagged scripture goddess devi .

3
What is the story of Goddess Shitala?
5
How was Goddess Manasa born?
3
What is the meaning of Karni Mata's description as a woman with a head in her hand?