Questions about the image of goddess Chhinnamasta? [duplicate]

Ask Question
Asked 4 years, 6 months ago
Active 7 months ago
Viewed 465 times
6
This question already has an answer here:
What is the story of Devi Chhinamastika? (1 answer)
Closed 3 years ago.

What is the mythological story behind Chhinnamasta?
Is there any philosophical meaning behind this image shown below ? 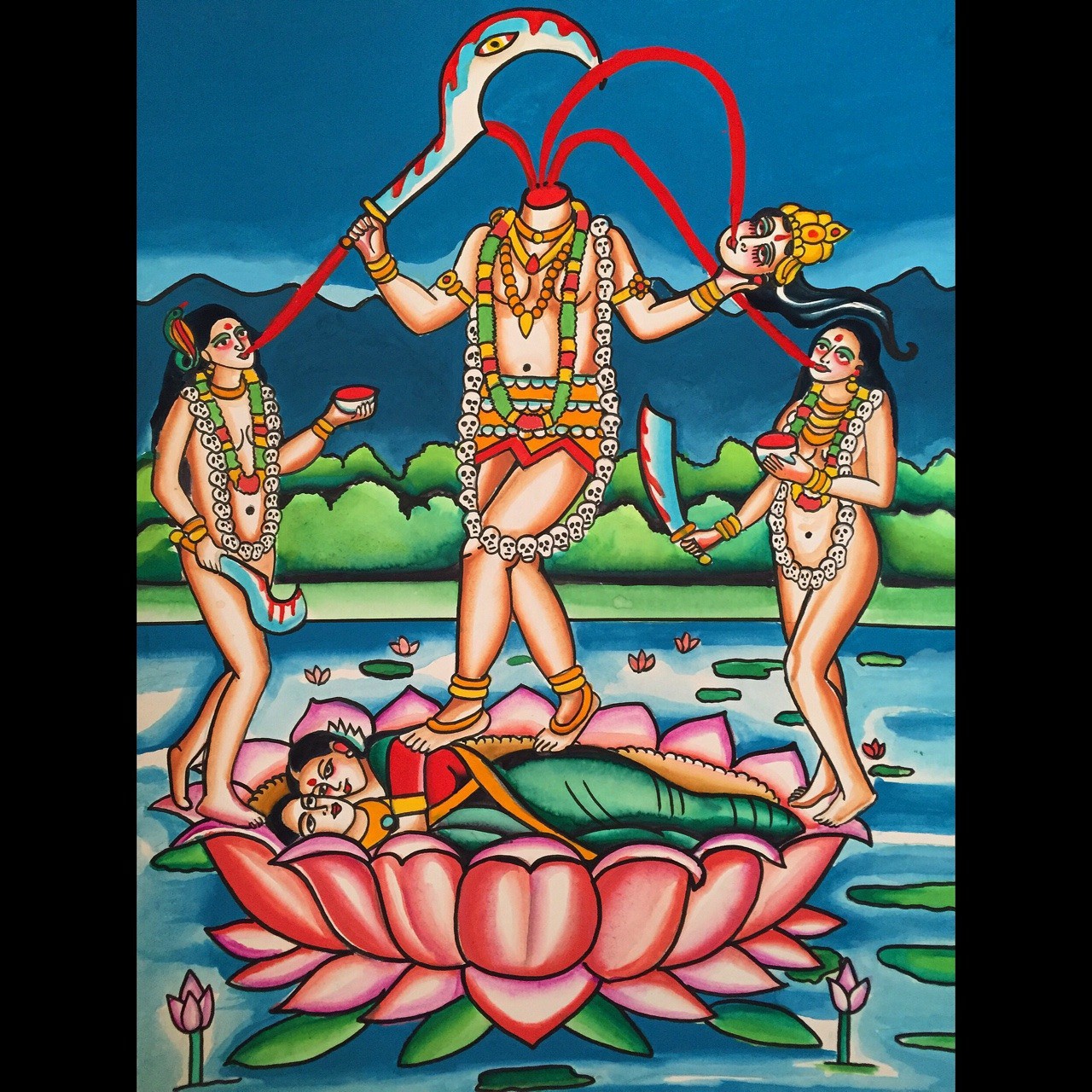 What benefits can one earn by worshiping this form?

ChinnamastA means the one with severed head. In the shAkta tradition, she is the sixth cosmic goddess of the ten "mahAvidyAs". Her form is very fierce and hence has attracted many controversies over the meaning. Some have even linked it with black magic etc. Let us see the esoteric meaning of the iconography,

The most controversial and important feature is the "head". The head signifies the mind and because the head is severed, it signifies transcending the mind or "mindlessness". This can also be equated to "turiya" or "turiyAteeta" state where mind is dissolved.

Secondly, the head is not severed by someone but by herself only. This shows sacrifice, the sacrifice of Ego (mind). Thus one reaches egoless state once the mind is dissolved.

It should be noted that the severed head does not show any pain or sorrow. But it has the expression of tranquility and contentment. The bliss which is experienced after mind and body consciousness is transcended. It is also the symbol of transcending the bondage.

Out from the severed body, i.e. The neck, three streams of blood ooze out. The three streams can be equated to ida, pingala and sushumna respectively. It should be noted that the central stream (susumna) is flowing to the actual severed head. Thus it shows that one has to reach to the highest chakra of the head via the path of central spinal passage of susumna with the Egoless mind in order to experience awakening and bliss in totality.

Thirdly, she is standing on kAma (ananga) and rati. This shows the transcending of desires and lust. It is more of a transformation of materialistic love to the divine love rather.

She is a very powerful and ferocious deity. She is also known as prachanda chandikA meaning fierce form of chandi goddess. She is also known as vajra vairochani meaning "the brilliant (radiant) one who is holding the thunder". Thus she is also equated with indrAnI the consort of Lord Indra. Because Indra holds the vajra (not an established fact yet).

She is the giver of yogic powers and enlightenment. There is much importance of this goddess in the Tibetian tantric cult as well. There she is referred as "Vajra yogini".

Not the answer you're looking for? Browse other questions tagged goddess tantra shaktism dasha-mahavidya chinnamasta .

9
What is the story of Devi Chhinamastika?

5
Why do certain goddesses exist in the form of rivers?
5
How was Goddess Manasa born?
7
Is Goddess Brahmacharini an avatara of Mata Durga?
6
Is their an association between Chhinnamasta & Indra and/or Vairochan Buddha?
7
About Goddess Ashvaroodha Devi
4
Understanding the history and construction of beeja mantra
4
Is the temple at Tirumala really the abode of the Goddess Bala Tripurasundari?