Who are the Sri Vidya Gurus mentioned by Bhaskararaya?

Sri Vidya is a Shakta sect which believes that the goddess Lalita Tripurasundari is supreme. Now one of the most important texts of the Sri Vidya sect is the Lalita Sahasranamam, found in the Lalita Mahatmya of the Brahmanda Purana, so the 18th century Sri Vidya philosopher Bhaskararaya wrote a commentary on it. In this excerpt of his commentary, Bhaskararaya discusses a verse in the Lalita Mahatmya which says that Lalita Tripurasundari was worshipped by gods, humans and Siddhas:

"A multitude of Devas (Divyaugha)" the holy Brahmarşis, Visvāmitra, etc. The Siddhas are Sanaka, Narada and other Yogins. The Rudrayamala, says, “Devi was attended by many crores of rulers of Quarters, by many crores of Moons, Suns and Vasus, by many crores of Yogins such as Sanaka, and by many Saptarisis and by many Naradas." Or, the word "Ogha" (multitude) of Devas, men, and Siddhas, may mean the different assemblies of Gurus. For there are seven Gurus of Gurus (Parama-Gurus) headed by Paraprakasanandanatha, eight Parapara-Gurus headed by Gaganānandanatha, and four Apara-Gurus headed by Bhoganandanatha. These three assemblies of Gurus are indicated by the words "Devas", "men", and "Siddhas" respectively. The above explanation follows the view of the followers of Kamaraja, but according to the School of Lopā nedrã, and according to the divisions of Viclydis, as described in the Jnanarnava etc., there are many groups of Gurus headed respectively by Misranandanātha, and others. The gradations among the Gurus can only be learned through the instructions of a Guru.

My question is, who are the Paramagurus, Parapara Gurus, and Aparagurus referred to by Bhaskararaya? Their names are listed in full in chapter 3 of of the Nityotsava, a work by Bhaskaraya's shishya Umanandanatha, as described in this web page:

A large section on the different gurus in the Shri Vidya tradition follows this section, and, as in the Ganapati section of Nityotsava, these are divided into celestial, siddha and mortal gurus, both for the vidya (mantra) that begins with Ka (Kadi) and for that which begins with Ha (Hadi).

But who are these figures? Presumably they must be ancient, since Bhaskararaya thinks the Brahmanda Purana is referring to them. Are they referred to in Hindu scripture, or in the works of earlier Sri Vidya philosophers, or what? Does anyone know their stories or when they lived?

Few months ago i bought the book NityAshodasikArnava which is widely considered as a part of the most authoritative text for Sri Vidya Sadhana called Sri VAmAkeswara Tantram.

The introduction of the book gives the Guru Paramapara of Sri Vidya from Krita to Kali Yuga as follows:

In Satyayuga first Guru was Adiguru or Parama Shiva. His name was Sri CharyAnAtha. His disciple was his own vimarshini Shakti who is not different from Shiva himself.

IMO , this is the most we can know from Scriptures about the Guru Parampara of Sri VidyA.

The guru paramparA of Sri Vidya consists of broadly 3 sections or "ogha" which literally means "flock" or "groups".

Third is mAnavaugha (human beings from which human paramparA continues)

When the ‘Prakasa’ swarupa of Sat-chit-ananda alongwith his own Sakti “Vimarsa” does the samkalpa “May I become many” ie., “Bahusyaam Prajayeeya….”, the first throb or spandana becomes “Charyanatha” who is non-different from Para Siva. Charyanatha is the Adi-guru of this Haadi Tradition in Krita Yuga. This vimarsa sakti is Mahakameswari. Charyanatha hands down this vidya to Kameswari. At the Bindu sthana sports the Adi Guru Charyanatha alongwith Kameswari. They are in the Saamarasya Bhava / Non-differential State with one another.

In Kaliyuga, Mitreshanatha handed down this vidya to Lopamudra. Lopamudra teaches this vidya to Agastya. Given below the guruparampara from Lopamudra and Agastya till the recent guru.

Muktakesini (One of the greatest Yoginis of Kaliyuga)

LalitA sahasranama is not the first text which talk of the gurus. Nor is the nityotsava is the first scripture to talk of these. These ogha-traya are mentioned in the most ancient texts of Sri VidyA like "parashurama kalpasutra" from which nityotsava is written in order to facilitate the nitya karma and poojas on parvAs.

The ogha are mentioned in the fourth chapter of PKS in the 10th verse which is given below. 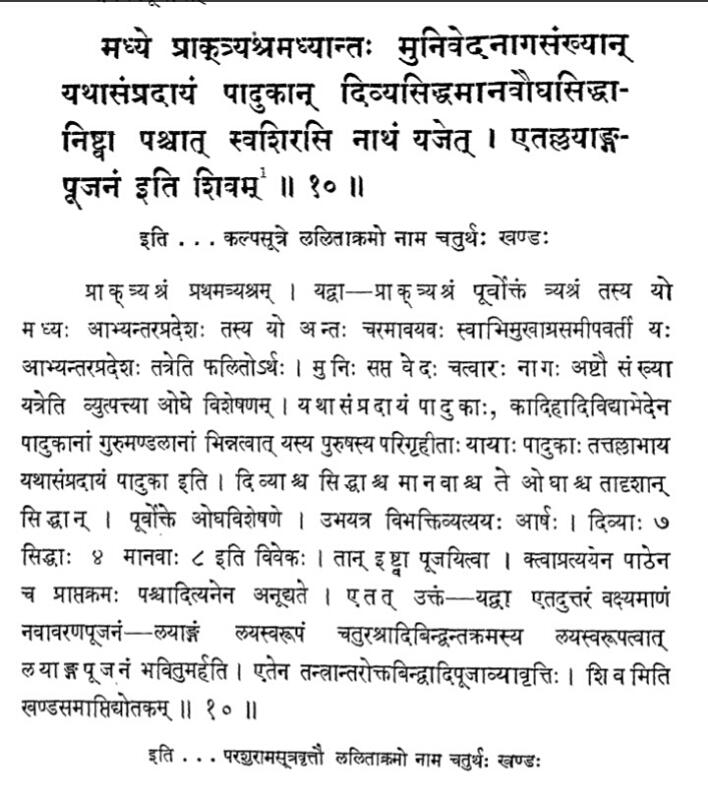 As the lineage is very ancient hence it is not possible to know about all the gurus of the paramparA. We know about some of the famous sages through purAnas and other books. In rest of the cases, there is no information available about their lives. So mostly we do not get to know about most of the gurus except a few popular names. Nevertheless, all the gurus are venerated and respected during the poojAs.

Lastly, Sri vidyA is not a philosophy like advaita vedAnta. It is more of a upAsana paddhati. Majority of the scriptures related to this shAstra talks more on the practical aspects rather than going much into the philosophy. Hence this shastra should not be confused with philosophies or other darshanas.

Not the answer you're looking for? Browse other questions tagged history shaktism brahmanda-purana sri-vidya .

11
What is Sri Vidya?
4
Who was Sri Vidya guru Pujyasri Bhaskara Raya?
3
Which mantra in sri vidya school is most suitable for manifesting wealth?
3
Which text describes 16th secret syllable of sri vidya?
6
Which Sri Vidya Guru Parampara does Adi Shankaracharya fall in?
7
Where can I find more details about this debate involving Bhaskararaya?
4
How Sanyasis are eligible to be initiated into Sri Vidya?