Adinatha's Khechari Vidya is an early Hatha Yoga text dated to the 15th century. This excerpt from the Khechari Vidya describes various Siddhis or magical powers that can be obtained by a Yogic practice involving the tongue:

The best adept quickly attains absolutely all magical powers that are found in the three worlds, such as magical sandals, the magical sword, power over zombies, magical elixirs, realgar, invisibility, access to the treasures of the subterranean realms, and power over male and female genies.

I'm interested in the magic achieved through realgar, which is another word for red arsenic. Here is what the translator says in a footnote:

Realgar (manahsila) is red arsenic, an ingredient in elixirs[.]... [A] Budhhist Kriyatantra, the Amoghapashakalparaja, describes how manahsila, when applied to the eyes, can make the wearer invisible and able to move in the ether[.]... Cf. Kamasutra 7.2.46, in which it is said that if one coats one's hand with the faeces of a peacock that has eaten haritala and/or manahsila and touches something, it becomes invisible.

First of all, I wasn't able to track down that statement in the Kama Sutra, although for obvious reasons I didn't look very thoroughly. But my question is, what scriptures describe using red arsenic to make yourself or other objects invisible?

Buddhist texts like the Amoghapashakalparaja may discuss it, but I want to know what Hindu scripture has to say on the subject.

This book Goddess Traditions in Tantric Hinduism makes a reference to a procedure in the Brahmayamala Tantra. 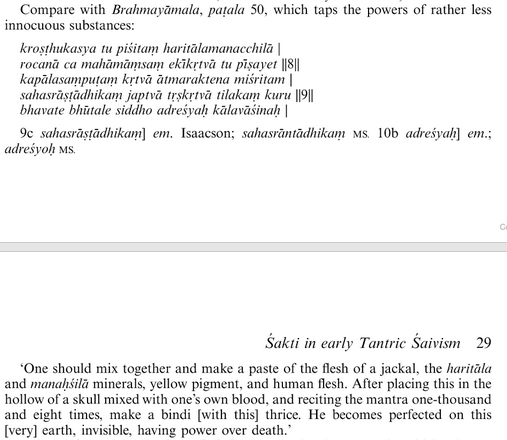 According to an exoticindiaart description Brahma Yamala Tantra is one of the oldest Bhairava Tantras and Kasmira Shaivaite Abhinavagupta has cited from this text in his Tantraloka. Moreover even some Buddhist Tantra scriptures like Laghusarprava contain extensive passages that are borrowed from this tantra.

I wasn't able to get a direct source to this tantra since I couldn't find anything on the net. If anybody else has a more reliable answer please feel free to contribute.

5
What herbs found on Earth give magical powers?
5
What magical powers are obtained from the Amalaka plant?
3
What siddhis are achieved when one attains turiya?
2
What is Vayu Siddhi and how to attain it? Are siddhis necessary for Moksha achievement?
2
Hindu scripture for gardening