What scriptures describe Vishwamitra and Vasishtha carrying the Earth?

This excerpt from the newly released Amar Chitra Katha comic book "Saptarshi" tells a story I hadn't heard before. In this account, the sage Vishwamitra visits the ashram of the sage Vasishta, who is telling his shishyas about how Japa or repeating the holy names bestows the greatest power on a person. But Vishwamitra disputes this, saying that Dhyana or meditation bestows the greatest power. To resolve their disagreement, Vishwamitra and Vasishta go to Vishnu, but he's busy and leaves his serpent Adiseshan to settle it.

Adiseshan says it is difficult for him to think while he is supporting the Earth on his hoods. So Vishwamitra offers to hold the Earth for him, using the power of meditation to give himself strength. But he's not able to hold it on his head for even a minute, so Adiseshan gives it to Vasishta. Vasishta chants Vishnu's name, and is thereby able to hold it on his head. And so Vishwamitra finally concedes that Japa is more powerful than Dhyana. 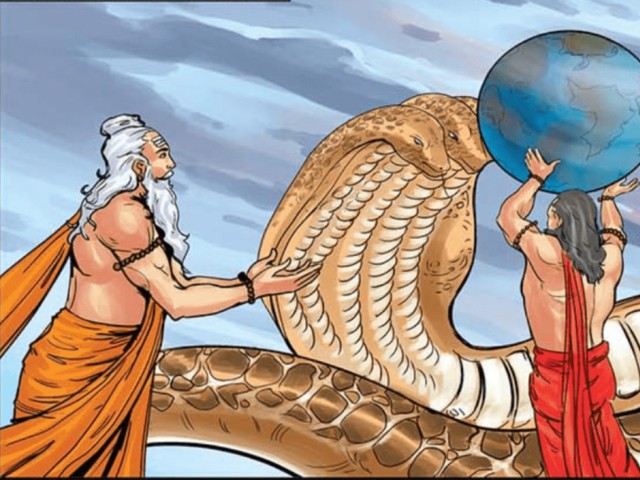 The only other Rishi I know of who carried the Earth was the sage Kashyapa, who did it twice as discussed in my answers here and here. On a side note, assuming the story is true, Vishwamitra and Vasishtha presumably used Mahima Siddhi or the power of becoming large to get big enough to hold the Earth.

vashishta earth adisesha vishwamitra
Share
Improve this question
edited May 6 '17 at 17:18
Keshav Srinivasan
asked May 5 '17 at 19:05

21
What did Kashyapa do with the Earth after he received it from Parashurama?
15
What is Ashta-Siddhi and Nav-Nidhi?
10
Did the divine architect Vishwakarma cause the Earth to submerge?

13
Is Balarama an Avatar of Vishnu or Adiseshan (or both)?
7
Why and how Vishwamitra plotted to kill sage Vashistha's son?
5
Vishwamitra & Indra were enemies so why does the Brahmarishi sing verses in praise of Indra?
6
What was the reason behind the clash between Vashishtha and Vishwamitra?
6
How did the life of Vishwamitra end on this Earth?
6
Is Vasistha an (Biological) ancestor of Rama?