Which Hindu scripture contains the story of a desperate man hanging from a tree branch?

A friend forwarded me the following story of a man clinging to a tree branch amidst a lot of troubles and still manages to sip honey from a hive. I've also heard this story before from others.

What's the source of the story? Is it taken or adapted from another story within some Hindu scripture? 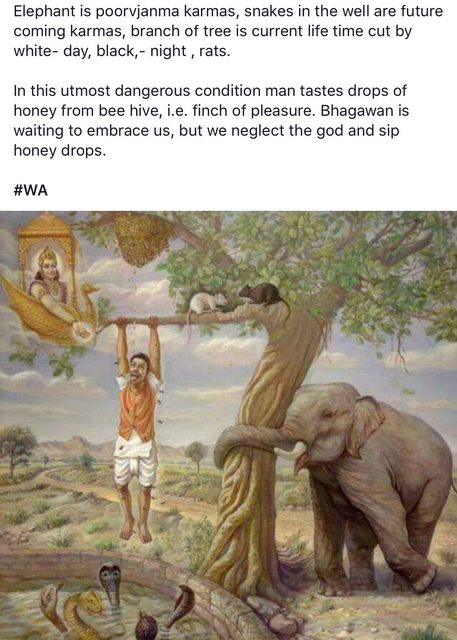 We are way too engrossed with the worldly pleasures, depicted as the honey drops, and so we miss God.

The elephant, our past karmas is holding us down in our current life and we are paying for our past actions.

The snakes, are waiting to bite back in the future life times, if we continue to indulge only in pleasures and wrong doings.

Our current reality is the only thing which decides our future. Burn all past karmas by doing penance and embrace Dharma.

Vidura tells this story to Dhritarashtra in this chapter of the Stri Parva of the Mahabharata:

Having bowed down to the Self-create, I will obey thy behest by telling thee how the great sages speak of the wilderness of life. A certain brahmana, living in the great world, found himself on one occasion in a large inaccessible forest teeming with beasts of prey. It abounded on every side with lions and other animals looking like elephants, all of which were engaged in roaring aloud. Such was the aspect of that forest that Yama himself would take fright at it. Beholding the forest, the heart of the brahmana became exceedingly agitated. His hair stood on end, and other signs of fear manifested themselves, O scorcher of foes! Entering it, he began to run hither and thither, casting his eyes on every point of the compass for finding out somebody whose shelter he might seek. Wishing to avoid those terrible creatures, he ran in fright. He could not succeed, however, in distancing them or freeing himself from their presence. He then saw that that terrible forest was surrounded with a net, and that a frightful woman stood there, stretching her arms. That large forest was also encompassed by many five-headed snakes of dreadful forms, tall as cliffs and touching the very heavens. Within it was a pit whose mouth was covered with many hard and unyielding creepers and herbs. The brahmana, in course of his wanderings, fell into that invisible pit. He became entangled in those clusters of creepers that were interwoven with one another, like the large fruit of a jack tree hanging by its stalk. He continued to hang there, feet upwards and head downwards. While he was in that posture, diverse other calamities overtook him. He beheld a large and mighty snake within the pit. He also saw a gigantic elephant near its mouth. That elephant, dark in complexion, had six faces and twelve feet. And the animal gradually approached that pit covered with creepers and trees. About the twigs of the tree (that stood at the mouth of the pit), roved many bees of frightful forms, employed from before in drinking the honey gathered in their comb about which they swarmed in large numbers. Repeatedly they desired, O bull of Bharata’s race, to taste that honey which though sweet to all creatures could, however, attract children only. The honey (collected in the comb) fell in many jets below. The person who was hanging in the pit continually drank those jets. Employed, in such a distressful situation, in drinking that honey, his thirst, however, could not be appeased. Unsatiated with repeated draughts, the person desired for more. Even then, O king, he did not become indifferent to life. Even there, the man continued to hope for existence. A number of black and white rats were eating away the roots of that tree. There was fear from the beasts of prey, from that fierce woman on the outskirts of that forest, from that snake at the bottom of the well, from that elephant near its top, from the fall of the tree through the action of the rats, and lastly from those bees flying about for tasting the honey. In that plight he continued to dwell, deprived of his senses, in that wilderness, never losing at any time the hope of prolonging his life.

As you can see, the description is considerably more elaborate than what the picture shows. In any case, Vidura explains the meaning of this allegory in the next chapter of the Stri Parva of the Mahabharata:

They that are conversant, O monarch, with the religion of moksha cite this as a simile. Understanding this properly, a person may attain to bliss in the regions hereafter. That which is described as the wilderness is the great world. The inaccessible forest within it is the limited sphere of one’s own life. Those that have been mentioned as beasts of prey are the diseases (to which we are subject). That woman of gigantic proportions residing in the forest is identified by the wise with Decrepitude which destroys complexion and beauty. That which has been spoken of as the pit is the body or physical frame of embodied creatures. The huge snake dwelling in the bottom of that pit is time, the destroyer of all embodied creatures. It is, indeed, the universal destroyer. The cluster of creepers growing in that pit and attached to whose spreading stems the man hangeth down is the desire for life which is cherished by every creature. The six-faced elephant, O king, which proceeds towards the tree standing at the mouth of the pit is spoken of as the year. Its six faces are the seasons and its twelve feet are the twelve months. The rats and the snakes that are cutting off the tree are said to be days and nights that are continually lessening the periods of life of all creatures. Those that have been described as bees are our desires. The numerous jets that are dropping honey are the pleasures derived from the gratification of our desires and to which men are seen to be strongly addicted. The wise know life’s course to be even such. Through that knowledge they succeed in tearing off its bonds.

Not the answer you're looking for? Browse other questions tagged scripture philosophy karma .