Who are all the Gurus of Abhinavagupta and what Paramparas did they come from?

Now the most famous Kashmiri Shaivite philosopher was Abhinavagupta, who lived in the 10th century. Similar to Ramanujacharya, Abhinavagupta had a lot of Gurus; I've seen sources that say he had 12 Gurus. So my question is, who are all the Gurus of Abhinavagupta, and what Guru Paramparas did they belong to?

So far I've found information on four Gurus of Abhinavagupta:

So does anyone have a complete list of Gurus of Abhinavagupta along with the Paramparas they belonged to?

Durvasa Rishi created one mind-born daughter, whom he initiated completely in the monistic way. Known as the Ardhatryambaka school of the Bhairava Tantras, this teaching manifests itself secretly from one woman to another. Kashmir Shaivism does not recognize women as inferior. In fact, Swami Lakshmanjoo tells us, “if a woman remains one-pointed in her spiritual practice, she can achieve in twelve days what would normally take one year”. There is no history of this school in kali-yuga.

In this manner fifteen generations of Siddha’s were created by mind. When, however, the fifteenth Siddha attempted to create a mind-born son, he was not successful. It is said he was not fully introverted, as he was also given to worldly pleasures. However, after sitting in long meditation, he found in this world a girl with good qualities, and went to her father and made arrangements to marry.

The Kula system was introduced in Kashmir in the beginning of the 5th century A.D. by Shri Macchandanatha. Later, in the 9th century, because its teachings had become distorted, it was reintroduced by Sumatinatha. In the line of masters that followed from Sumatinatha, Somanatha was his disciple. Shambhunatha was the disciple of Somanatha, and the great Abhinavagupta was the disciple of Shambhunatha. 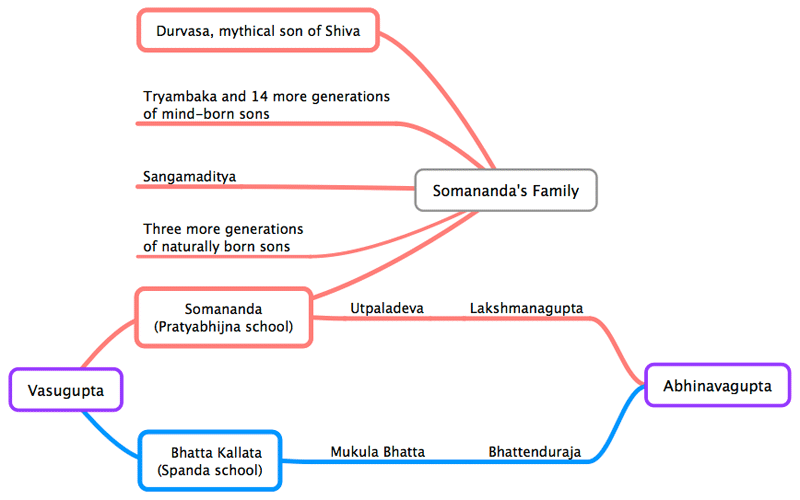 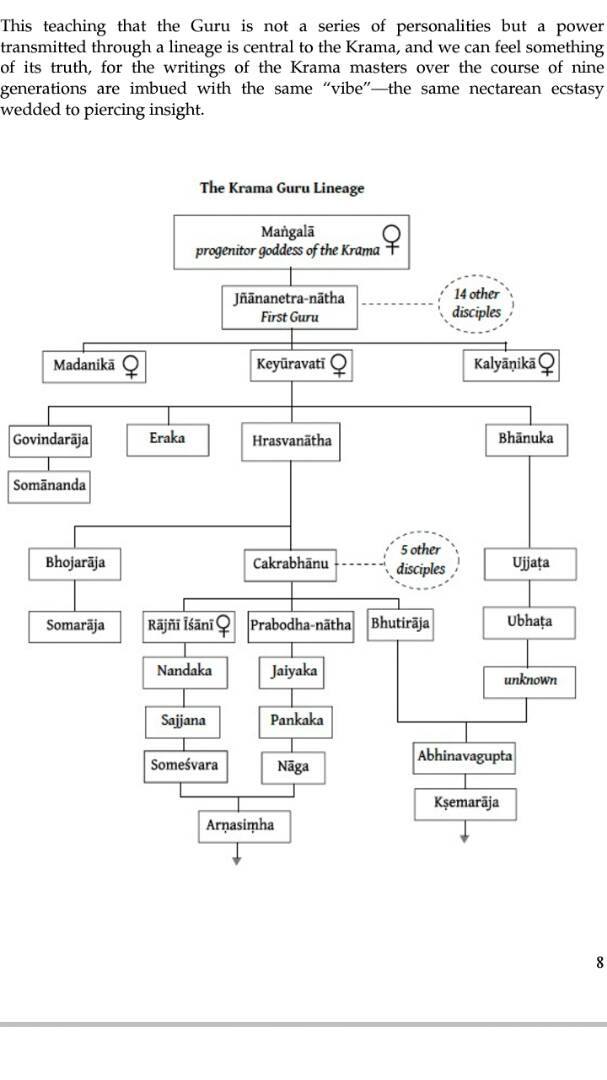 These were also his gurus. He was also adept in grammar and various art forms.

Other gurus whose details are not mentioned are:

You can know more about his works and life from this website.

15
What is the Guru Parampara of Kashmiri Shaivism?
6
What parts of Utpaladeva's Ishwara Pratyabhijna Vivriti are available in English?
9
Who is the daughter of Atri?
6
Which are all Rishis whom Rama met during his Exile of 14 years?
5
What scriptures describe Durvasa having three sons who promulgated Agamas?

4
Why are the Himalayas often associated with gurus and rishis?
6
What parts of Utpaladeva's Ishwara Pratyabhijna Vivriti are available in English?
6
Who were the gurus of Brihaspati and Sukracharya?