Is there any relationship between Sat, Chit, Ananda, and the Three gunas Sattva, Rajas and Tamas?

I wondered if there were any relationship between those concepts.

This a partial answer:

Brahman is the relationship between Philosophy of Life and Three Gunas. It means the concept of the transcendent and immanent ultimate reality, Supreme Cosmic Spirit.

The concept of God in Upanishads is the ‘Brahman’ or the Universal Soul (synonymous with The Absolute, Supreme Being or World Spirit – param-atman). Brahman is the term used to indicate pure, limitless, attribute less, universal, absolute awareness. Thanks @The Destroyer, Brahman is Sat-Chid-Ananada which is beyond three Gunas.

According to the Bhagavadgita, the gunas (the primary qualities or modes of Nature) are three in number, sattva, rajas and tamas. They exist in all, including humans, in various degrees of concentration and combination. They also exist in all objects and natural products. Hence, even the food which we eat is important if we want to cultivate good behavior. Depending upon their relative strengths and ratios, the gunas determine the nature of things, beings, their actions, behavior, attitude and attachments and their involvement with the objective world in which they live. The primary purpose of the gunas in the living beings is to create bondage, through desires for sense objects, which lead to various attachments with them and which in turn keep them bound to the world and under the perpetual control of Prakriti (7.13).

In the fourteenth chapter of the Bhagavadgita, Lord Krishna gives us a very detailed description and definition of the three gunas, which is summarized below. 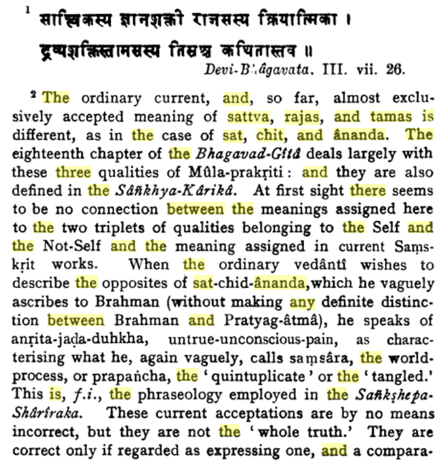 Firstly ,it's an awesome question...the ultimate God is gunateeta ( beyond Guna), , indescribable, limitless , beginingless etc which is very vague and does not convey any information to amateurs.But another accepted description of God is Sat Chit Ananda , how can someone describe the indescribable !!...It's based on smart understanding of the gunas and tracing them to its origin.rajas means movement ,opposite ( or beyond)of which is stillness which is exactly what Sat indicates, Tamas means mindless indulgence ( without awareness) ,for the sake of what ? For pleasure or Ananda ,satva Guna is like seeing the bigger picture, divine justice etc ,this impartiality is nothing but pure awareness ..now combine all three " pure awareness of motionless state of Ananda"

No, there can not be any relation in Absolute sense.Because Sachchidananda Brahman is gunaatita who is ever existing and gunas are His Maya. Sri Krishna says in Gita:

The world is mesmerised by the Maya comprised of Triguna can not know Me as I am beyond this Tigunamayi Maya.

The above sloka also mentions that Brahman has to be reached crossing the ocean of Trigunatmika maya.

Nistaigunyo bhavarjuna (2/45) so that by going beyond the three gunas, Arjuna will be able to become "Atmavan" ie knower of Brahman (Ibid 2/45).

So according to Gita, Tigunaatmika maya is God's, but God is beyond Maya.

Sri Sri Devi-Mahatmya also treat the Goddess as Triguna Maya but Her Supreme form is mentioned as "Turiya" or Gunatitaa" which is Brahman. (Sri Sri Chandi, Chapter 4, sloka 7:

You are Triguna and cause of this world, and you are also the Adya Avikaraa Parama Prakiti.

So in relative sense, from the point of view of oneness of Shakti and Shaktimaan/Shaktimati, there is some relation but not from the Absolute View Point as the Sat-Chit-Ananda Brahman is beyond Trigunatmika Maya.

Not the answer you're looking for? Browse other questions tagged gunas .

4
Is there any relationship between the caste system and kundalis/gunas matching as it relates to marriage?
14
Do the Trimurti (Brahma, Vishnu, Shiva) cleanly map onto the 3 gunas (sattva, rajas, tamas)?
7
Classification of Mahapuranas on the three Gunas Sat, Rajas and Tamas
4
Does the Skanda Purana classify Puranas into Sattva and Tamas?
3
Is the Sattva-Rajas-Tamas classification considered important in Advaita?
5
What are sattva, rajas and tamas?
2
Effect of the three Gunas on Rebirth and Karma
1
How can a person with sattva guna live with rajas and tamas people?