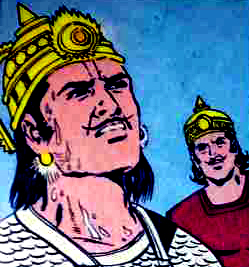 10
Why did Lord Krishna end Karna's life in such a way?
11
If Lord Parashurama really cursed Karna, how could he launch Brahmastra on Arjuna twice?
6
How can Kundala of Karna protect him in battle?

8
Where is Karna in the afterlife?
6
Karna Suffering Defeats
2
How did Karna die in his previous birth?
3
Who killed Sudama (son of Karna)?
2
How did Karna become the king of Anga?
3
How many sons and daughters did Karna have?
4
Why does nobody recognize Karna to be a Kshatriya warrior despite his having divine Kavach and Kundala?