”O king, make progress in thy duty of administration, extend happiness to the virtuous. O terrible chastiser, burn down the irreligious foes. O splendid person, humiliate and consume utterly like dried up stubble, him, who encourages our foe.”

Rend, rend to bits, rend through and through, scorch and consume and burn to dust, the one who rejects the Vedas

He who dwells fixed in the atmosphere, smiting the blasphemers of the god that do not sacrifice to him be reverence with ten Sakvari-stanzas.

This charm shall conquer and cast down thy foemen. Be thou the first to slay the men who hate thee.

May our hymns give you great delight. Display your bounty, Thudered. Drive off [kill] the enemies of the Vedas.

ye killed all darkness and the Gods’ blasphemers.

Sati continued: If one hears an irresponsible person blaspheme the master and controller of religion, one should block his ears and go away if unable to punish him. But if one is able to kill, then one should by force cut out the blasphemer’s tongue and kill the offender, and after that one should give up his own life.

No , killing of Infidels are not fully allowed in Vedas. There are some mantras in Atharva-Veda which asks god agni about destroying evil minds of foes , pardoning / Sheltering then , Welcoming those who came to ask pardon /shelter. Destroying only evil-nature or evil-mind of foes and not the people , even Atharva-Veda prays to god agni for welfare of son's and daughter's of evil-minded people and to motivate them towards good path.

These are some of the mantras from Atharva-Veda.

O Agni you are the form of the knowledge , let us see your bright bravery. You are the guide to whom who have lost the right way. By your grace lead our foes to the right path. By your order, let wickedness come here to repentance by identifying themselves.

Welcoming those wicked minded people who came here for repentance. O guiding star! source of bright knowladge! By your grace take them in your control. To cure them, O Agni & Soma examine them.

O Soma! you let us drink the nectar of knowledge by your grace. Let the evil-nature gets destroyed by roots, let this reach to the children of evil-minded once & let them also be made good minded. Let the eyes be lowered of those, who praise you.

so from above shlokas of Atharva-Veda it is clear that vedas do not at all support/suggest the concept of infidels. It supports a Humanist approach towards enemies, evil-minded people. 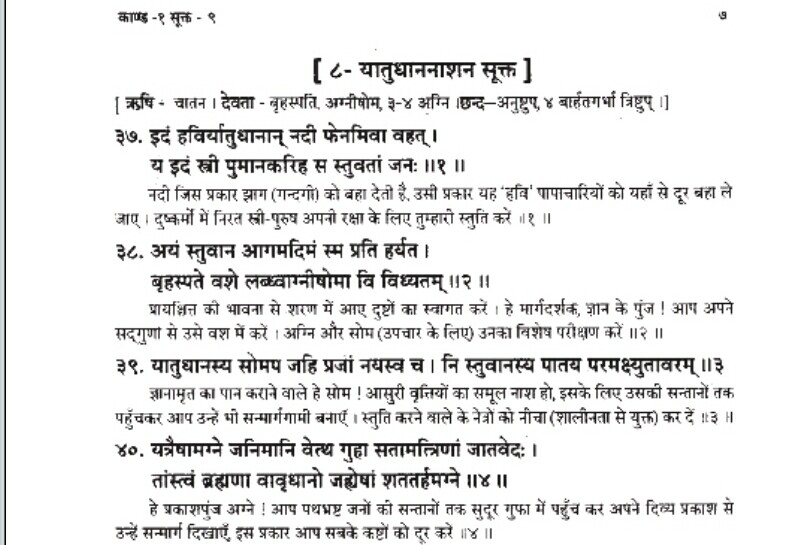 Yajur Veda 13.12: Rise up, O Agni, spread thee out before us, burn down our foes, thou who hast sharpened arrows. Him, blazing Agni! who hath worked us mischief, consume thou utterly like dried-up stubble. (Griffith)

There is no reference to irreligious here. That is a mistranslation.

Atharva Veda 12.5.62: Rend, rend to bits, rend through and through, scorch and consume and burn to dust. (Griffith)

Again there is no reference to infidels or irreligious. This hymn and previous hymn is all about On the duty of giving cows to Brāhmans, and the sin and danger of withholding the gift.

Homage be paid him with ten Sakvari verses who stands established in the air's mid-region, slaying non-sacrificing God-despisers! (Griffith)

This verse is basically describing Rudra who killed those who are Devapiyun (देवपीयून्) which means god blasphemers. Nothing about ordering believers of Vedas to kill who are god blasphemers.

Further, in the Vedas Dasyus are mentioned as Devapiyun. So, this verse says Rudra destroyed Dasyus.

Atharva Veda 10.3.3 This charm shall conquer and cast down thy foemen. Be thou the first to slay the men who hate thee.

In Atharva Veda 20.93.1 the word Brahmadvish is translated as those who are enemy of Vedas. Only Raksasas are mentioned in the Vedas are Brahmadvish (Rig Veda 7.104.2), which means this verse is a prayer by sages to kill Rasksasas.

The Sanskrit word “nida” here is a compressed form of Devanido (देवनिदो). In the Vedas, Raksasas are mentioned as Devanido, so this verse is also about Indra and Soma killing Raksasas.

Spark SunshineSpark Sunshine
3,51411 gold badge99 silver badges3333 bronze badges
2
Add a comment  |
1
Want to improve this post? Provide detailed answers to this question, including citations and an explanation of why your answer is correct. Answers without enough detail may be edited or deleted.

This all is copied from a muslim sources.

And the vedas aren't contains the verses like Qur'an or Bible.

These all are the hymns with which we pray to god.

And If you read the names of the hymns from Vedas, the subject of them are given in their title. And those meanings are also very clear.

Not a single verse from any vedas commands to kill any living creature.

They all are the hymns. For example atharva veda 12:2:23 Which means, Atharva veda book-12 - hymn-2. The name of hymn-2 is A funeral hymn, and deprecation of Agni the Consumer of corpses.

7
What scriptures mention Krishna killing Sakatasura the cart demon as a baby?
10
Does Balarama ever regret killing Romaharshana?
8
Are Sudras not allowed to study any scriptures of Hindusim?
4
Atma ( Soul ) in Hindu Scriptures
3
Does Vaishnavism ordain one to cut the tongue of a blasphemer?