Can we wear Banalinga as pendant around our neck?

Banalingas or Narmada lingas are considered as Swayambhu Shiva Lingams which are found on the river beds of Narmada river.

There are many shops which sell them online as wearable pendants. Like this: 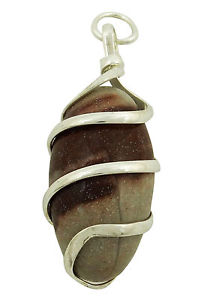 So, there must be many people who wear them on their body. But is it allowed in scriptures?

Which scriptures discuss the rules of wearing Banalingas and what are those rules?

AFAIK, there is a shaivite sect called Veerashaiva where followers do wear such Shiva Lingas as pendants.

In Tamil Shaivism and Kamika Agama (according to the Tevaram, Nampi Arurar), the Bana Linga is classified as Acala Linga (i.e., Lingas that should not be moved, thence, not wearable):

Source: “The Religion and Philosophy of Tevaram”

Not the answer you're looking for? Browse other questions tagged scripture shiva shiva-lingam shaivism .

14
Why does lord Shiva wear a Naga (snake) around his neck?
15
What is the significance of Rudraksha in Saivism?
6
Do Scriptures confirm about the "Swayambhu" nature of Shalagramas and Banalingas?
5
Why do some Advaitins wear an Urdhva Pundra made of ash?