is there any mention of gem stones in puranas?

In puranas or vedas, is there any information about gem stones? Do people of that time used to wear these kinds of stones for the betterment of their life?

Yes , Gemstones very amply are discussed in Hinduism scriptures. Especially the Puranas we find very detail description of the gemstones. For example Garuda Purana Achar Kanda , chapter 68 ( Agastya Samhita ) Description of te origin of the gems in the treaties of Ratna Pariksha (test of gems ) by Holy Agastya - mentions some of the valuable gemstones , states How to Test genuineness of gems , the rules to wear them etc.

Gems such as Padmaraga , the Emerald , the Indranila and Vaidurya the Pusparaga , the Diamond the pearl , the Karketana , the Pulaka Rudhiraktya (blood stone) the crystal and coral should be carefully collected. Subject to the advice to the experts on the subject.

In the same chapter we find following description -:

Of the gems and the precious stones , some are endured with the virtues of expiating all sins or of acting as a prophylactic against the effect of poison , snake bytes and diseases , while there are others which are possessed of contrary virtues.

Diamonds are prohibited as articles of female wear , as they are possessed of the Mystic Virtues and making them sterile and Unhappy.

So its clear that gems posses mystic powers and people of that time used to wear these kinds of stones for the betterment of their life . 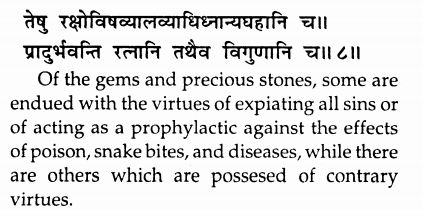 The Vedas itself mention using gemstones for increasing strength, vigour etc. The Atharva Veda has many suktas dedicated to gemstones and gem therapy. I am giving below few mantras from few of those suktas.

O man , Prajapatih the master of house hold binds on you, this invincible stone at first for might and vigour. I the physician bind on you for long life, splendour, energy and strength. Let this invincible one protect you.

So, yes people must be wearing gemstones from very ancient times.

The History of Indian Gemology:

The cultures of the Indian subcontinent have studied gemstones for millennia, and many ancient texts detail the medicinal, spiritual, and supernatural powers of various gems. Evidence, dating as far back as 5,000 years ago.

The Vedas, the oldest Indian scriptures, contain several references for the use of gems in ceremonial rituals and everyday life. They describe the powers of precious stones to influence subtle energies and connect the Earth to the rest of the universe. Because precious stones were closely associated with the gods, they had the power to heal and influence destiny.

According to ancient Indian texts, sapphires were grouped onto four ‘varnas’ or classes. Hindus were only allowed to wear sapphires with the color designated for their caste. The Brahmins’ stone was whitish blue, the Kshatriyas’ was a reddish blue, the Vaishyas’ was yellowish blue, and the Sudras’ was a dark or blackish blue. Nine astrological gemstones are associated with these Nine planets in our Solar system.

Study Of Stones and Usage in Puranas:

Gemology or the scientific and ethnic study of gemstones is an important and integral part of applied astrology. Use of precious gems and stones has been an ancient practice in India. Scriptural evidences however show that concept of gemology is as old as the creation itself.

Apart from many kinds of weapons, Lord Vishnu bears Kaustubha Mani (a gem named Kaustubh) on his chest. This gem is most dear to Him. This hymn shows that even before the whole universe came into being, Lord Vishnu did have an existence and the gem Kaustubh also existed along with Him. During medieval period also, various scholars shed light on the science of gemology. They authored many great scriptures as well. Acharya Varahmihir was the most prominent of those great scholars. A scripture Vrihat Samhita written by Varahmihir still has a wide recognition among the gemologists. It has a whole chapter, Ratnadhyay devoted to the comprehensive description of the gemstones. Among Puranas, Agnipurana contains exhaustive description about gemology.

A gem is something that has been dug out from earth or deep sea and has many rare but miraculous qualities. A gem is unique and often rare because of its specific composition. It may differ in effects, colour, tinge and hues.

In Puranas people use to wear Jewels, Jewel is an ornament or piece of jewelry containing precious Gem stones. They too have their distinct appearance, beauty, hues and effects and are important accordingly. Their uses are also wide and varied such as personal beautification, adornment, house building, idol construction, exhibition of wealth and luxury etc.

1) Kaustubh Mani: It has a deep blue colour like a blue lotus and a radiance equal to the sun. According to Hindu mythology, Lord Vishnu wears Kaustubh Mani in a garland on his chest. It is a powerful jewel and bestows fortune, luxuries as well as invincibility on to its wearer besides extremely beautiful and imposing.

2) Chinta Mani: Name of this jewel is self-explicit. The wearer is freed from all the worries and fretting. It is white in colour and has a brilliant hue. It gives its wearer all kinds of wealth and comforts.

3) Syamantak Mani: It is a common belief that this jewel adorns the necklace of Lord Surya (the sun god). It is said to have a brilliant blue hue that instantaneously blinds the onlooker. If it is taken in darkness, it fills the ambience with day-like light. There is an interesting tale related to this jewel.

4) Rudra Mani: Nobody will be unaware of the bounty of Lord Shiva. His costumes as well as ornaments are strange. He wears only tiger’s skin and formidable black snakes around his shoulder. The gods presented Lord Shiva with a jewel that came to be known as Rudra Mani. Lord Shiva threadened the jewel among the beads of His rosary. The jewel Rudra Mani is also benevolent in virtues. Thus, according to Hindu mythology, only four jewels come in the category of heavenly jewels.

According to Garuda Purana: Vedic View of Gems (http://www.agt-gems.com/mysticarticles/flawless.html)

According to Vishnu Purana and Shrimad Bhagwat Mahapurana, Bali, the grandson of Prahlad was a great king of the demons. With a resolution of dethroning Indra as the king of heaven, Bali organized a hundred Ashwamedha Yagyas. On the appeal of Indra, Lord Vishnu decided to stop the hundredth Ashwamedha Yagya of Bali and arrived there in the guise of Vamana (a dwarf Brahmin) and begged him to donate land measuring three steps. In two steps, Lord measures entire earth and heaven. Since there was not room than to put the third step, Bali offered his head for the Lord to put his third step. Thus, Lord Vishnu sent Bali direct to the Paatal & offered him to rule the Whole nether World. With the touch of the Lord's foot, Bali's earthly body converted into Gem stones.

Bali body parts converted into different kinds of minerals and felt all over at different landmasses, sea, and mountains.

Vajra or Heera or Diamond: It originated from the pieces of Bali's brain.

There are different kinds of diamonds on basis of colors like Green, white, yellow, black, purple, pink, brown. These colored diamonds contain impurities that cause their color. A pure diamond that contains very fewer impurities is often transparent.

According to Garuda Purana, diamonds with crack or a broken diamond, which contains spot in center and opaque, are not favorable to be used as a gemstone since they bring bad luck and misfortunes to the wearer. Diamond is a stone of planet Venus. There are many shreds of evidence in the history that shows the diamond have positive and adverse effects on humans. Manu diamonds like Kohinoor, Cullinan, King Oiroff are very famous in human history. As per Vedic astrology, people with Ascendant house Aries should wear coral, those with Ascendant house Taurus should wear diamond. It will be beneficial for the people with Taurus as their ascendant house to wear diamond. People with Ascendant house Aries should not wear diamond and emerald. Many experts forbid even blue sapphire for these people. But they believe that if the position of Saturn is strong in the horoscope, such people can safely wear blue sapphire.

Diamond, blue sapphire, and pearl are strictly forbidden for the people with Leo as the ascendant house.

Not the answer you're looking for? Browse other questions tagged vedas puranas belief .

3
Is there any mentions in scriptures about the usage of gemstones in astrology and their relationships with the navgrahas?