What is Lord Hanuman's weapon of choice from scriptures? 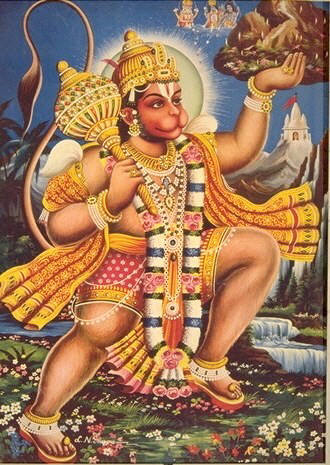 But during few conversation with our in-house user Sree Charan, he said

There is no explicit reference that Hanuman used Gada/mace. In Sundara Kanda(a chapter in Ramayana an epic of India), he used a iron club which he finds in Lanka instantaneously. - src

Which made me wonder, then how come Hanuman is always depicted with Mace/Gada as primary weapon? What is the primary weapon of Hanuman from scripture then?

As we all know, Hanuman belongs to a class of being called Vānara. As described in this chapter of Balakanda, they are the attackers using trees and rocks. Their favorite weapons are nails and claws.

All of them are the assaulters with stones, and all are the attackers with trees, and all have their nails and claws as their weapons, yet all are experts in missiles.

Here, expert in the missiles means that they are skillful in warfare and weaponry. They know how to face missiles and weapons Yet they chose to use nails, claws and rocks in case of war.

All of those who are well-versed in warfare and endowed with the might of divine eagle Garuda, used to thwart the pride of lions, tigers and great snakes just by their own prideful subjugation while they move about the forests.

In the fight between Vāli and Sugriva, it is generally depicted that they used their golden maces to attack each other. But they used fists, trees and rocks in their combat. Vāli says these words to his brother Sugriva:

Properly clenching fingers this great fist of mine is firmly clenched, and it will unclench only on taking your lives when I pitch this on you at full speed." So said Vali threateningly to Sugreeva. [4-16-20]

Thus said, Sugreeva with high dudgeon said, "this fist of mine shall fall on your forehead plundering your lives." [4-16-21]

Among those two there happened a deadly fight time and again using trees with branches, peaks of mountains, their own nails that are similar to the razor-sharp edges of thunderbolts, and with fists, knees, feet, and arms, like the fight that once chanced between demon Vritra and Indra.

We don't find specifically a choice of a weapon of Hanuman like sword, maces etc., he uses what he finds instantly.

After this incident, Ravana sends seven sons of his minister Prahasta and army to fight with Hanuma.

In the final battle too, Hanuman used huge rocks, trees, mountain peaks to attack the demons.

Above are only some examples of Hanuman's choice of weapons. If we search each and every chapter of YuddhaKanda, we find that he killed many demons using his nails, fists, trees and mountain peaks. Not only Hanuma, other valiant vānaras like Nala, Neela, Angada et cetera had used similar weapons like Hanuma does.

Conclusion: Hanuma used rocks, trees and his body parts to attack his enemies(demons) in the war making them his primary weapon of choice.

How come Hanuman is always depicted with Mace/Gada as primary weapon?

Hanuman is widely known for his physical strength. The mace is also the primary weapon of some strong warriors of Mahabharata like Duryodhaa, Bhima. If we look at the picture, A mace in the hand increases an opinion that the warrior is very strong. So, this is an attempt to depict that Hanuman is a very strong and glorify them. Other famous vānaras like Sugriva and Vāli are also shown holding maces.

The translators on Valmikiramayan.net also add in their commentary to the verse 1-17-25,26

The golden maces or clubs handled by Hanuma, Sugreeva, and Vāli usually depicted in pictures are for more mythical ornamentation to glorify the characters.

Like any other vānara, Hanumān's weapon of choice was 'bare hands' for close combat and uprooted trees and rocks for distant combat.

Here's a scene from Vālmīki Rāmāyaṇa where Hanumān uses his fist to hit Rāvaṇa in the chest but he was no match for Rāvaṇa's strength.

"This five-branched right hand of mine, which I now raise, will rob you of your life that has long been resident in your body." [6-59-56]

Hearing the words of Hanuma, the exceedingly valiant Ravana, his eyes inflamed with anger, answered. [6-59-57]

"Strike quickly without fear, O Monkey! Win eternal renown. Thereafter, I shall destroy you, after measuring your strength." [6-59-58]

"O, foolish fellow! Why this boasting? Now come, strike me once! My fist is about to dispatch you to the Abode of Yama the Lord of Death!" [6-59-66]

Hearing the words of Hanuma, the powerful Ravana, enraged, his eyes red with fury and whirling his fist with force knocked it down violently on Hanuma's chest. [6-59-67/68]

Under the shock, Hanuma reeled once again. Seeing that mighty Hanuma exhausted, Ravana turned his chariot towards Nila. [6-59-69]

Another incident from Sundara Kāṇḍa where Hanumān throws rocks and uprooted trees on Jambumālī:

Hanuma, struck by those arrows, was enraged with that demon and then saw by his side, a big rock of a very large measure.

Seeing that work in vain, the powerful Hanuma of terrific prowess, uprooted a very large sal tree and whirled it around.

A true vānara has no use for things like maces, swords, bow & arrow, etc. Bare hands will do it.

Say No To CensorshipSay No To Censorship
29k1414 gold badges107107 silver badges230230 bronze badges
2
Add a comment  |
2
Want to improve this post? Add citations from reputable sources by editing the post. Posts with unsourced content may be edited or deleted.

Wherever the Glories of Raghunatha are Sung, there, with Hands held over His Bowed Head in Salutation, and Eyes Filled with Tears, Maruti (Hanuman) is Present; I Salute Maruti Who puts an End to the Rakshasas.

Not the answer you're looking for? Browse other questions tagged scripture hanuman weapon .

7
Why don't the Vanaras use weapons?
4
What was the size of Sugriva's army that fought against Ravana alongside Rama?
3
Which scriptures describe about Bhima and Hanuman's Gada (club or blunt mace)?