Are there any verses which pray for the birth of daughter in Vedas?

Prajāpati, Anumati, Sinivāli have ordered it. Elsewhere may he effect the birth of maids, but here prepare a boy.-Atharva Veda 6.11.3

There are especial hymns and verses in Vedas which pray for the birth of a son like Atharva Veda 3.23.

Be not divided; dwell ye here; reach the full time of human life.
With sons and grandsons sport and play, rejoicing in your happy
home, -Atharva Veda 14.1.22;

I cook the offering, I present oblation: only my wife attends the holy service. A youthful world, a son hath been begotten. Begin a life that brings success and triumph. -Atharva Veda 12.3.47

Unmarried men desire to wed; bountiful givers wish for sons. Together may we dwell with strength unscathed for high prosperity. --Atharva Veda 14.2.72

Wise, teaching, following the thought of Order, the sonless gained a grandson from his daughter. Fain, as a sire, to see his child prolific, he sped to meet her with an eager spirit. --Rig Veda 3.31.1

Above verses only emphasise on son over daughter. Are there any verses which pray for daughters too?

It is not that the Vedas only praise the birth of a male child alone. There are instances where female progeny is also praised. Further, it is important to know that the word "putra" does not necessarily mean only male child but could mean child in general. Similarly in many places word "man" does not only indicate men but all of the mankind including men and women.

O Brahman, let there be born in the kingdom the Brahman illustrious for religious knowledge; let there be born the Râjanya, heroic, skilled archer, piercing with shafts, mighty warrior; the cow giving abundant milk; the ox good at carrying; the swift courser; the industrious woman. May Parjanya send rain according to our desire; may our fruit-bearing plants ripen; may acquisition and preservation of property be secured to us. (Shukla Yajurveda 22.22)

My Sons are slayers of the foe, my Daughter is a ruling Queen: I am victorious: o’er my Lord my song of triumph is supreme. Rigveda 10.159.3

With sons and daughters by their side they reach their full extent of life, Both decked with ornaments of gold. R.V 8.31.8

With many a son, father of many daughters, He clangs and clashes as he goes to battle. Slung on the back, pouring his brood, the Quiver vanquishes all opposing bands and armies. R.V 6.75.5

Some scholars have attempted to prove the daughter as an unwelcome member of the family but it’s absolutely against the tenets of the Vedas which suggest quite the opposite to these claims. In subsequent ages women have been denied the privilege of Upanayana too which is not in accordance with the vedic injunctions. See the following quotes from the gRhya sUtras: (Which are the practical manuals for conducting the Vedic rites and rituals)

When a husband is desirous of having a daughter, he should touch all the fingers of his wife except her thumb during the marriage ceremony. (AshvalAyana GRhya SUtra 2:125, Apastamba GRhya SUtra यदि कामयेत स्त्रीरेव जनयेयमित्यङ्गुलिरेव गृह्णीयात् 6:12)

So it is very obvious to a discerning person that the girl child was never disliked or unwelcome in the household. In fact special prayers and propitiations were conducted to have a girl in the family!

There is a verse in Brihadaranyaka Upanishad 6.4.17 , Which says -

He who wishes that daughter to be born to him who would be a scholar and attain a full term of life , should have rice cooked with sesamum.

Now its clear from above verses that people from Vedic period also wish a daughter child to be born to them. And this hymn shows the way to those who Want their daughters to become a scholar and live a long life .

There is no instance in Rug-Veda where the birth of a girl child was considered inferior.

It indicates that the position of a girl in Rig Vedic times was not considered a low. Very few number of verses regarding this matter perhaps indicative that society in need of larger number of male warriors to ensure its survival. 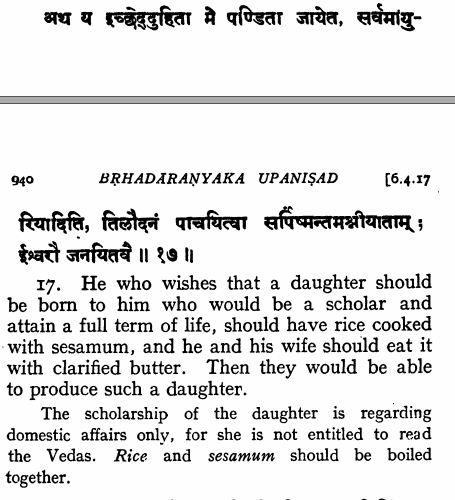 I cook the offering, I present oblation: only my wife attends the holy service. A youthful world, a son hath been begotten. Begin a life that brings success and triumph.

Clearly. the term used in past tense. It does not refer to a thing that is going to happen.So, this cannot be considered as prayer.

There is no prayer for son here.

With that auspicious general flow wherewith the bulls propagate their kind, Do thou obtain thyself a son: be thou a fruitful! mother-cow.

Does this look like getting a male child from cow and bull?? Looks wired? Not at all. The male animal here is the spiritual insight reflecting the spiritual eye concept. This is not at all or humans. This is a metaphor.

7
Why do some Hindu scriptures say sonless women must be abandoned?
8
Are there famous deities/gods or spiritual supremo, who had a daughter?

8
Are there any scriptures in Hinduism equivalent to the Vedas?
11
Are there any Variants in Samhita of Vedas?
9
Which verses of the Sama Veda are not taken from the Rig Veda?
8
Which verses for god indra in vedas mention him as friend of all human beings?
13
Which are the methodologies for interpreting Vedas?
5
Who were the ancient women Rishikas in Vedas? What are the verses in Vedic scriptures which allow women to read Vedas?
1
Are there any contradicting things written in the scriptures/vedas?