Why do some Hindu scriptures say sonless women must be abandoned?

The liquor drinker, the diseased, the cunning, the barren, the killer of wealth, the unpleasant spoken, who bears female children should be superseded, so also (one) who hates people.

A barren wife may be superseded in the eighth year, she whose children (all) die in the tenth, she who bears only daughters in the eleventh, but she who is quarrelsome without delay.

Let not a husband show love to a barren woman, or to one who gives birth to female children only, or whose conduct is blamable, or who constantly contradicts him; if he does (have conjugal intercourse with her), he becomes liable to censure (himself).

And on the following day he goes to the house of a discarded (wife), and prepares a pap for Nirriti;–a discarded wife is one who has no son…hail!’ For a wife that is without a son, is possessed with Nirriti (destruction, calamity)…

Once while he was listening to the religious discourses of the Munis, he heard unmistakeably the Munis telling that the man who is sonless can never go to the Heavens; so he must get a son somehow or other

There is no prospect in the after birth of the sonless; never, never will Heaven be his. Without son, there is none other who can be of help in the next world. Thus in the Dharma S’âstras, Manu and other Munis declare that the man who has sons goes to Heaven and the sonless one can never go to Heaven. The man possessing a son is entitled to the Heavenly pleasures can be vividly seen, rather than imagined. The man with son is freed from sins; this is the word of the Vedas…

No. It's not true. No Hindu scriptures say sonless women must be abandoned or can be abandoned .This is just a wrong translation of the verses. These verses do not mean abandoning , discarding , suspending of women or wife. Let's see how.

The verses you have mentioned are:

A man is at liberty to marry a second wife in the event of his first having had no issue after eight years of wedlock ; after nine years of that of one whose children die in their infancy ; after eleven years of the marriage a wife that has given birth to daughters only , and when the first is foul-mouthed and to give him a bit of her mind.

Now let's look at this verse. Firstly, it says, a man can marry second wife , (start of if condition) verse states conditions. It is known and it is quite good belief in our society that a son only can liberate his parents. So, other part of verse is only for those who want a son, and only if their first wife failed to deliver son. This does not mean, they are free to have a second wife as they wish, but also when first wife failed to deliver children or when children die in their infancy.

It does not say anything about discarding or abandoning first wife anywhere. Now the last part tells us that , one can marry a second wife instantly if first wife is foul-mouthed or if she speaks unpleasantly , again providing a condition.

So Garuda Purana verse does not in any way permits abandoning , discarding , suspending of women.

A barren wife may be superseded in the eight year ( by another wife ) she whose children (all) , she who bears daughter in the eleventh , but she who is quarrelsome without delay.

A man can resort to polygamy if his wife is drunkard , a patient of incurable disease , shrewd , barren spendthrift , bitter mouth , delivering girl children and envying her husband continuously .

Yajnavalkya Smriti also does not say anything about abandoning , discarding , suspending of women. here.

So, from analyzing verses from two Smritis and one Purana , we can surely say that this is translation and interpretation problem.

No Hindu Scripture says a barren woman shall be abandoned. What you mentioned in questions is wrong translation or wrong interpretation. 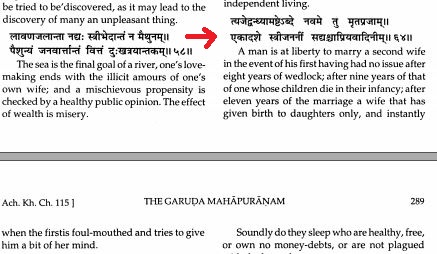 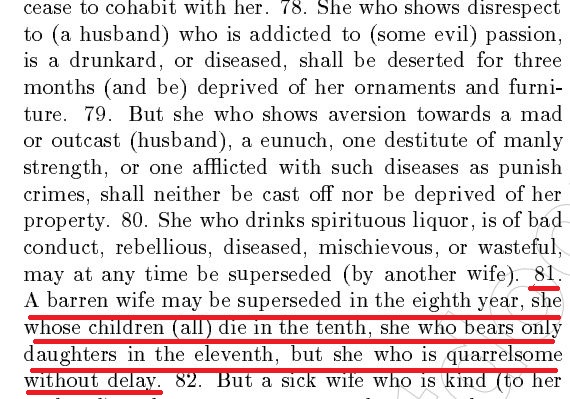 Not the answer you're looking for? Browse other questions tagged scripture vedas women .

16
Are there any verses which pray for the birth of daughter in Vedas?

11
Can women do Pitru Tarpanam?
3
Why do sanyasa scriptures degrade women?
5
Why some Hindu Scriptures are against women?
8
Why Devi Bhagavata Purana, being a Purana for feminine deity, insults women?
8
Do any scriptures say that women must worship God instead of their husbands and become self-dependent?
6
Why do some scriptures say men should not marry a girl who has no brother?
6
Is Vasistha an (Biological) ancestor of Rama?
4
What do Hindu scriptures say about female rulers?