How Maharshi Vyasa knew all the story of Mahabharata?

Active Oldest Votes
11
Want to improve this post? Add citations from reputable sources by editing the post. Posts with unsourced content may be edited or deleted.

Veda Vyasa is one of eight Immortals according to our Hindu Scriptures. He lived through all the 5 generation

There is real story behind Who wrote the Mahabharatha? 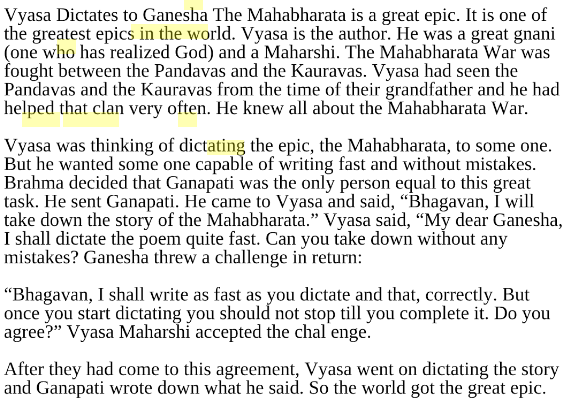 And Satyavati gratified with having obtained the excellent boon in consequence of which she became sweet-scented and her virginity remained unsullied conceived through Parasara's embraces. And she brought forth the very day, on an island in the Yamuna, the child begot upon her by Parasara and gifted with great energy. And the child, with the permission of his mother, set his mind on asceticism. And he went away saying, 'As soon as thou rememberest me when occasion comes, I shall appear unto thee.' And it was thus that Vyasa was born of Satyavati through Parasara. And because he was born in an island, he was called Dwaipayana (Dwaipa or islandborn). And the learned Dwaipayana, beholding that virtue is destined to become lame by one leg each yuga (she having four legs in all) and that the period of life and the strength of men followed the yugas, and moved by the desire of obtaining the favour of Brahman and the Brahmanas, arranged the Vedas. And for this he came to be called Vyasa (the arranger or compiler).

Satyavati later went on to become the wife of the king Shantanu, who was the father of Bhishma, Vichitravirya and Chitrangada. When Vichitrayirya and Chitrangada died, Vyasa fathered children with Vichitravirya's wives Ambika and Ambalika, through the practice of Niyoga, as described in this chapter of the Adi Parva of the Mahabharata. These children were Pandu and Dhritarashtra. Pandu was the adopted father of the Pandavas, and Dhritarashtra was the adopted father of the Kauravas. So Vyasa's Mahabharata is essentially an epic poem about Vyasa's own grandchildren.

But we need not even stop at the Pandavas and the Kauravas; Vyasa met Arjuna's great-grandson Janamejaya, as described in this chapter of the Adi Parva of the Mahabharata:

Formerly, the spirited and virtuous Krishna-Dwaipayana, by the injunctions of Bhishma, the wise son of Ganga and of his own mother, became the father of three boys who were like the three fires by the two wives of Vichitra-virya; and having thus raised up Dhritarashtra, Pandu and Vidura, he returned to his recluse abode to prosecute his religious exercise. It was not till after these were born, grown up, and departed on the supreme journey, that the great Rishi Vyasa published the Bharata in this region of mankind; when being solicited by Janamejaya and thousands of Brahmanas, he instructed his disciple Vaisampayana, who was seated near him; and he, sitting together with the Sadasyas, recited the Bharata, during the intervals of the ceremonies of the sacrifice, being repeatedly urged to proceed.

And there are even stories of Adi Shankaracharya and Madhvacharya meeting Vyasa!

But it is not through his longevity of life that Vyasa was able to compose the Mahabharata, but rather through divine vision obtained through Tapasya, s described in this chapter of the Adi Parva of the Mahabharata:

The son of Satyavati having, by penance and meditation, analysed the eternal Veda, afterwards composed this holy history, when that learned Brahmarshi of strict vows, the noble Dwaipayana Vyasa, offspring of Parasara, had finished this greatest of narrations, he began to consider how he might teach it to his disciples.

In that respect Vyasa is similar to Valmiki, who lived through the events of the Ramayana but composed the Ramayana through divine vision as I discuss here.

Not the answer you're looking for? Browse other questions tagged mahabharata vyasa .

24
How could Valmiki write the Ramayana?
15
Who are the seven immortals (Chiranjeevi)?
20
Is there a list of the 8800 difficult verses of the Mahabharat?
12
Is Veda Vyasa still alive? If yes, where is he? How can one recognize him?
4
Where is Vālmīki right now?

10
Why did Vyasa seek the help of Lord Ganesha?
23
Why Bhagavata purana is considered the foremost of all puranas?
7
What is the story of Badarayana Vyasa?
3
Where does Vyasa say this shlokha in the Mahabharata?
7
Discrepancy in the timeline of compilation of the Srimad Bhagavatam and the Mahabharata
6
Sahadeva knew future events in Mahabharata. How many times did he use this knowledge in Mahabharata?
3
Timing of Mahabharata writing? Was it written after or before the war?