What form of Vishnu held Mandara at the top during the Churning of the Ocean?

Most people only know that Vishnu incarnated as Kurma the tortoise during the Churning of the Ocean. What is less well-known however, is that at least three forms of Vishnu were involved in the Churning of the Ocean; as Kurma the tortoise he held up Mount Mandara, in a thousand-armed form he stood on the top of Mount Mandara and held it, and as the Deva Ajita he was instrumental in pulling the serpent Vasuki to churn the ocean. (Vishnu also appeared as the twin sages Nara and Narayana, the god of medicine Dhanvantari, and the enchantress Mohini in the course of the story.). Here's how this chapter of the Srimad Bhagavatam describes it: 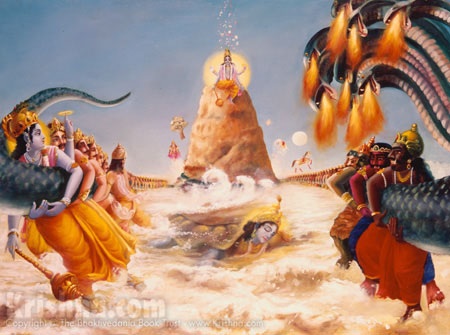 O son of the Pāṇḍu dynasty, when Mandara Mountain was thus being used as a churning rod in the Ocean of Milk, it had no support, and therefore although held by the strong hands of the demigods and demons, it sank into the water. Because the mountain had been sunk by the strength of providence, the demigods and demons were disappointed, and their faces seemed to shrivel. Seeing the situation that had been created by the will of the Supreme, the unlimitedly powerful Lord, whose determination is infallible, took the wonderful shape of a tortoise, entered the water, and lifted the great Mandara Mountain.... Thereafter, Lord Viṣṇu entered the demons as the quality of passion, the demigods as the quality of goodness, and Vāsuki as the quality of ignorance to encourage them and increase their various types of strength and energy. Manifesting Himself with thousands of hands, the Lord then appeared on the summit of Mandara Mountain, like another great mountain, and held Mandara Mountain with one hand. In the upper planetary systems, Lord Brahmā and Lord Śiva, along with Indra, King of heaven, and other demigods, offered prayers to the Lord and showered flowers upon Him.... When nectar did not come from the Ocean of Milk, despite so much endeavor by the best of the demigods and demons, the Supreme Personality of Godhead, Ajita, personally began to churn the ocean.

I'm interested in the second form. My question is, what is the thousand-armed form of Vishnu, who stood on the top of Mount Mandara and held it?

If he's not Vishnu's Vyuha form Aniruddha, do we know anything further about him? Does he have a name? Is he described in other scriptures, and did he ever appear anywhere other than the top of Mount Mandara?

It seems to be the avatar Ajit mentioned by you in the question as well. The Satvata Tanta Part 2 Verse 24 mentions this:

In the 6th Manvantara the Lord appeared as Ajita, the son of the brahman Vairaja. Seeing the demigods broken by a brahman's curse the Lord became unhappy. Assisted by the demigods and demons, He at once churned the ocean of milk.

This is repeated later in the text as well in Patal 6 Verse 59:

Not the answer you're looking for? Browse other questions tagged vishnu avatars bhagavata-purana samudra-manthan .

18
How is 'Vishwa Virat Swaroop' of Lord Krishna described in Mahabharata?
6
Which incarnations of Lord Vishnu are mentioned in the Rāmāyaṇa?

7
Why does Vishnu's thousand-armed Aniruddha form carry the equipment of a student?
2
What scriptures describe Vishnu's body being blackened by Vasuki?
15
Did the Churning of the Ocean happen again in the Vaivasvata Manvantara?
5
Is Sri Kurma an avatar of Lord BrahmA (Prajapati)?