Is there temple worship in the Vedas?

Do Vedas talk of temples? Were there any temples in the Vedic era?

If yes what are some of the references?

If no then is temple worship a post Vedic concept?

Temple and idol worship appears to be a post-Vedic development according to several scholars.

Swami Harshananda (Ramakrishna Math) says the following in All About Hindu Temples:

A Brief History of Hindu Temples

How and when the first temple took its birth is anybody's guess. Temples do not seem to have existed during the Vedic age. The practice of preparing images of the deities mentioned in the Vedic mantras might have come into vogue by the end of the Vedic period. The view that the yāgaśālā of the Vedic period gradually got metamorphosed into temples by the epic period owing to the influence of the cults of devotion is widely accepted.

The earliest temples were built with perishable materials like timber and clay. Cave-temples, temples carved out of stone or built with bricks came later. Heavy stone structures with ornate architecture and sculpture belong to a still later period.

Essential Parts of A Typical Temple 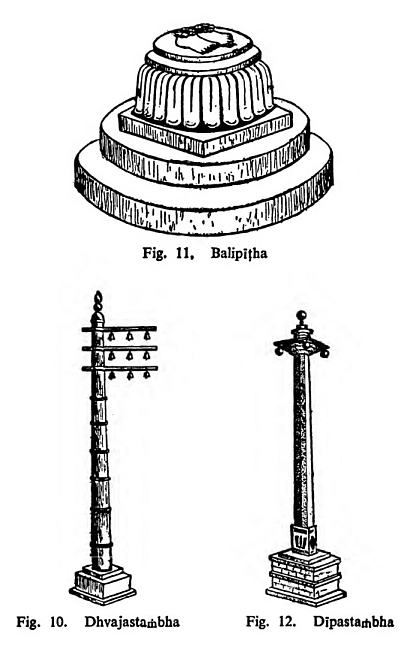 The same author in A Concise Encyclopaedia of Hinduism, Volume 1, says there are some references to temples housing idols in Adbhuta Brāhmaṇa with a note that this brāhmaṇa is probably a late addition to the Ṣaḍviṃśa Brāhmaṇa of Sāmaveda:

Each of the four Vedas, the basic scriptures of the Hindus, is divided broadly into two sections: the Mantra and the Brāhmaṇa. The Mantra section contains prayers and hymns. The Brāhmaṇa section deals with the application of these mantras in rituals.

The Adbhuta Brāhmaṇa forms the sixth (and the last) chapter of a bigger work called Ṣaḍviṃśa Brāhmaṇa which itself is the second of the nine brāhmaṇas of the Sāmaveda, available to us now. Though the first five chapters of the Ṣaḍviṃśa Brāhmaṇa deal with the ceremonies and rituals connected with the Somayāgas, the sixth one makes a complete departure and deals with strange phenomena like ill-omens and the expiatory rites that help offset their effects. It is perhaps due to this reason that this particular section is thus designated (adbhuta = wonderful, strange).

There are indications to prove that the Ṣaḍviṃśa Brāhmaṇa originally consisted of only five chapters and the sixth i.e., the Adbhuta Brāhmaṇa was appended to it later.

The entire book deals with adbhutaśāntis or appeasement of portents, and is divided into twelve khaṇḍas or sections. The various portents indicating imminent dangers are described as being connected with the gods like Indra, Yama, Varuṇa and Viṣṇu; and appropriate śāntis (rites of appeasement of the deities) are also given. The idea seems to be that when these gods are displeased, troubles start and when appeased through appropriate rites, they cease.

The list of portents given is quite long but interesting. Starting from the breaking or damage of household articles for apparently no reason, right up to natural calamities like earthquakes, destruction of crops and the fall of meteors, the list mentions the happening of many unnatural and improbable phenomena also. Among such, it is curious to note that temples shake and the idols of gods laugh, weep, sing, dance or close their eyes! This is a clear indication that temples with idols installed, had already come into being by the time of this Brāhmaṇa.

In Temple-and-Image Worship in Hinduism (Jan, 1928), J. N. Farquhar writes that as late as the 19th century there were some Śrauta brahmins who refused to bow down to idols indicating Vedas did not support idol worship:

3. How, then, did temple-and-image worship become the common cult of Hinduism and displace the ancient sacrifices?

There is no record of the change in Hindu literature, nor is there any law in existence which declares the practice legitimate. All that we can make out from the literature is that the practice of image-worship became established and recognized within Hinduism round about 400 B.C. References to images, temples, and temple-priests make their appearance first in the literature of the fourth century B.C. They are found in the Adbhuta Brāhmaṇa, tho Gṛhya Sūtras, the Dharma Sūtras, and in the early sections of both epics; while such references are not to be found in earlier literature.

(c) As we have just seen, the use of images, since 400 B.C., has been recognized as legitimate for all Hindus, in domestic as well as in temple worship; and it has proved so popular that since then it has been almost universally practised.

Yet, from the very beginning, a part of the Brāhman community, large or small, refused to adopt the cult of images, and continued to perform the ancient Vedic sacrifices. Since all the directions for the performance of these sacrifices are found in the ancient Hindu literature which is classed as śruti, i.e. revelation of the highest grade, these men were called Śrautas. It is probable that most cultured Brāhmans maintained this attitude for a long time.

Yet in the course of the centuries, image-worship steadily gained ground among Brāhmans of all types; so that the number of Śrautas has slowly dwindled until to-day. Yet, even now, there are a few families in which the head of the house is called an agnihotri, because he keeps the sacred fire burning and offers domestic sacrifice in it; and, from time to time, though very rarely, one hears in India that a Śrauta Brāhman has had one of the great sacrifices performed. Further, we are assured by cultured Hindus that, a hundred years ago, there were Śrauta Brāhmans in existence who had never bowed down to idols. There are still a few Śrautas in India, but whether they maintain this Puritan attitude or not the writer does not know.

Radhakrishnan thinks that there is a reference to a temple in the Rig Veda.

They deck the fleet steed for the bounteous giver: the maid adorns herself and waits to meet him.

The solitary reference to a temple is in Rig Veda X.107.10 where the word deva-mana, building of a god, occurs.

The Veda talk about spiritual matters only, occasionally giving references to the other practices prevalent at that point of time.

The core values of Sanatana Dharma of Vedic era advocate self enquiry only.

The article on Indus Valley Civilisation (3300 BCE to 1300 BCE), which was considered to have existed in Vedic Era, states that (4th sub-para) there is no conclusive evidence of palaces or temples – or of kings, armies, or priests.

Not the answer you're looking for? Browse other questions tagged vedas temple agamas .

9
Were there any temples in Satya yuga?
0
Does the story about Ṛbhus indicate practice of religious rituals other than Spirituality in Vedic era?

10
How should be a Shivaalay Temple?
14
What do Hindu scriptures say about Hindu temples?
13
Guidelines inside any south Indian temple
7
What are the benefits of undertaking a pilgrimage to Pushkar Tirtha?
13
Do Vedas talk about avataras?
7
Moksha in the Vedas (excluding the Upanishads)
1
Is there any temple where Shiva is worshipped in the form of a pillar without pedestal?
4
Multi headed or handed Gods in Vedas?
2
Is the concept of one Ishwara present in Vedas? Authenticity and Ancientness of Purusha Sukta