Why Prince Ram did not head North when banished.?

Prince Ram, when banished from court of 14 years travelled south despite knowing that he may have to cross Narmada which was not recommended by Lord Manu. Why did he not simply go North. He could have saved all the troubles of losing Sita and wage war.

Why did he not simply go North?

I think the answer is provided in Valmiki Ramayana itself.

Long ago Kaikeyi protected King Dasharatha in one battle. After the incidence she received two boons from king Dasharatha as follows -:

Oh, Rama! During a battle and a great war between celestials and demons long ago, I protected your father who was pierced by darts. Then, he gave me two boons."

"Oh, Rama! According to those boons, I asked the king for coronation of Bharata and for your going to Dandaka forest today itself." VR 2-18-33

So Rama decided to go to Dandaka forest

Rama, the best of men, decided to go to Dandaka forest fearlessly with his prowess, consoled his mother, advised his brother by good thoughts and made hearty circumbulatory salutation to his mother.VR 2-21-63

At the time of Ramayana Rama was living in Ayodhya also known as Saketa. It is adjacent to Faizabad city in the central region of the Indian state of Uttar Pradesh.

Now Ramayana describes Dandaka-aranya as a vast forest. Some passages represent it as beginning immediately south of the Yamuna. The present-day identification of the Dandaka forest is debated. According to Bimala Chum Law, it covered almost all of Central India, from Bundelkhand to Krishna River. Dandaka

So he moved in south direction to reach Dandaka forest as he promised to kaikayi. And not in northward direction. 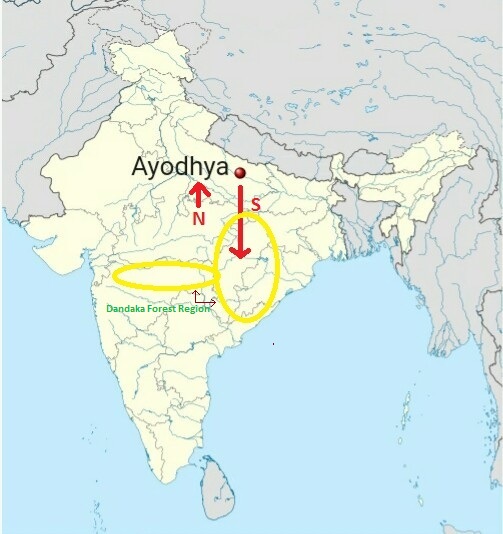 The one of the key reason of Lord Narayana's avtar (incarnation) is to kill all bad Demons And Lord Rama's avtar was not exception of it.

One of the main reason of Rama's avtar was to kill Ravana (coz he can only be killed by human) and all his supporters. So he had no choice but to head to south to make his birth meaningful by making all loks (worlds) fearless from terror of Ravana.

Although this is a divine reason But it has logical explanation also because vidhi works in logical way. Means, it's not like that Lord Rama said to Lakshman that let's go south because we need to kill Ravana. Vidhi (divine planning) make them travel to south Direction. here is HOW...?

It starts from Maharani Kakai's wish to sent Rama to Banvas which was actually a divine planning. When Mantharaa was convincing Maharani Kakai then at that time Devi Saraswati sat on toung of Manthra so that She can effectively convince Kakai to make Ram to go for banwas.

When Bharat came to Rama with intention of bring back Rama to Ayodhya and make him King But Rama refused Bharat's request by saying, right now his first duty is to full fill his Father's Promise or boon which was given to Mother Kakai. Bharat has to go back without Rama.

When Bharat went back to Ayodhya then after few time Rama decided to leave Chitrakut. When He was preparing to leaving then Saints (who was living in chitrakut) asked to Rama, why you are leaving? You can spend your 14 years of banvas in Chitrakut with us. Then Rama replied "Bharat is very emotional. He might try again to come here to convince me. And since Public (Prajaa) of Ayodhya has come to know that I am living in chitrakut then they will also started to visit here. And like that your peace will get disturbed again and again".

Note: Saints used to live in peace (away from crowed) for tapasya. And Lord Rama didn't want to spoil their peace. So He left Chitrakut.

During Journey of banwas Rama came to know that demons used to kill saint for their meal. So to protect Saints Rama started to travel more and more in search of demons so that He can make all saints fearless from Demons.

While his travel, One day They reached to Puchvati, where they found Jatayu and came to know He is friend of his father. So he finally decided to stay in Panchwati to spend their last year of Banwas.

Step 4: Shurupnakha came to Rama and rest we all knows what happened next. Because of Shurupnakha Ravana decided to kidnap Mata Sita And Rama has to go deeper in south in search of Mata Sita.

Note: It was not coincident that Shurupnakha was going from the way in which Lord Rama was staying and her attraction toward Rama was also pre planned incident by vidhi to make Rama to go for Ravana and make Brahma's boon (Only human can kill Ravana) fullfill.

He could have saved all the troubles of losing Sita and wage war.

You are wrong here. Actually Rama already aware of the fact that Ravana will try to kidnap sita. SO one day Rama said to Sita that "Now the time has come where we have to do a leela. Ravana will come for you and that eventually will become the reason of his death. So now you have to go in protection of Fire God (Agni Deva)." Then Rama summons Agni Deva and asked to Keep Sita with him and clone of Sita stayed with Rama.

Note: This was major secret which was not known to anyone. Even Lakshman wasn't aware of it. Rama disclosed this secret at time of Agni Priksha of Mata Sita. When Lakshman came to know that Rama is preparing agni priksha for Mata Sita in which Site has to come to Rama from fire/burning path then Lakshmana got angry and refused to let this happened. Then Rama tell him truth that the meaning of this Agni Pariksha is just to get my Sita back from Agni Deva.

At the time of Agni Pariksha, Agni Deva appeared with Mata Sita from that fire.

19
During his lifetime, did Rama know that he was a God?

3
Why did not Urmila accompany Lakshmana?
1
In Ramayana, why did Lakshman & Ram got hit with Naag Pash?
4
Why did Shree Ram shoot the arrow at the deer when asked by Sita mata?
7
Why did Ram give up Sita instead of the throne?
6
Did Lord Ram visit this place during his exile?