Is Bagalamukhi Parvati's different incarnation or other form of Sakthi? Which scriptures or Puranas has the story of Bagalamukhi?

Is Bagalamukhi Parvati's different incarnation or other form of Sakthi?

She is one form of Sri Adya or Adi Parashakti or the primordial and the supreme Goddess.

In the Shakta Agama called the Mahanirvana Tantram, this what Lord Sadashiva says to his consort Sri AdyA about her different forms or manifestations :

All knowledge and we all are born of you. You know everything and the whole world but no one knows you. You are Kali, Tarini, Durga, Shodasi, Bhuvaneswari , You are Dhumavati, Bagalamukhi, Bhairavi, Chinnamasta. You are Annapurna, Sarswati and Lakshmi. You are the embodied form of all the Shaktis and that of all the Gods.

So, Bagalamukhi is one of the forms of Sri Adi Parashkati .

The 10 MahAvidyas are dealt with great details in ShAkta Tantras or Agamas. They are defined in Tantras like the MundamAlA Tantram, BagalAmukhi Tantram, ViswasAra Tantram etc and here i am quoting from the ViswasAra:

Here is a mythological story about how ParAshakti manifested in the form of Bagalamukhi:

The story is from an Agama Text called the Swatantra Tantra. I am giving the first few Sanskrit verses only and the translations of the remaining.

[Lord Shiva says to Devi] In ancient times, during Krita Yuga (or Satya Yuga) there was a time when wind flowed on earth at great speed. Lord Vishnu started worrying that this powerful wind-flow might destroy the whole world. And he began to do a severe Tapasya (penance) to discover a remedy. Pleased by Vishnu's severe penance Goddess MahAtripurA Devi stopped that wind flow. Thereafter the Great Goddess saw a big lake called Haridra and started playing in it. And after that, in a nearby place called Saurastra, an luminous Goddess emerged from that yellow lake at midnight of Krishna Paksha Chaturdasi ( 14th day of the dark phase of moon) and the day was Tuesday. In Tantra Texts this great night is known by the name of VirarAtri. And this Goddess is the eighth SiddhavidyA called BagalAmbikA.

Among the many Bagalamukhi mantras the most famous is the ShattrimsatAkshara (or the 36-lettered ) mantra of hers.

Seer (Rishi) of this mantra is Narada and Trishtup is the meter (Chandah). It goes something like this (i have removed all the beejas from it):

Bagalamukhi Sadhana and her mantras are primarily used for the purpose of Stambhana (which is one of the Tantrik Shatkarmas) and which is nothing but completely paralyzing one's wicked and evil enemy.

As described by Lord Shiva himself this in brief is the purpose of Bagalamukhi mantras and the main objective of worshiping her:

For the benefit of the devotees and for paralyzing the evil groups of enemy (vairi) i am telling the Bagalamukhi mantra which is as powerful as the Brahmastra. This mantra can paralyze anyone or anything. Even the movement of air can be stopped by its mere remembrance what to say of others.

Those who don't have mantra diksha can still pray to Goddess using the following simple sloka:

Bagalamukhi has a golden complexion and her dress is yellow. She sits in a golden throne in the midst of an ocean of nectar full of yellow lotuses. A crescent moon adorns her head. She is believed to have the power to remove Kuja Dosha,

Salutations to Goddess BHagalamuki , Who wears yellow silk cloths , Who removes fear as well as enemies , Who is well known as Jwalamukhi and Vaishnavi

Goddess Bagalamukhi is usually depicted as cutting off the evil enemy's tongue and thus paralysing his speech.

In this context its said:

[The mantra] paralyses the face and the speaking ability of the wicked and the evil persons, it paralyzes even Brihaspati's (who is considered as the Lord of speech or Vachaspati) speech , what to say of others'. 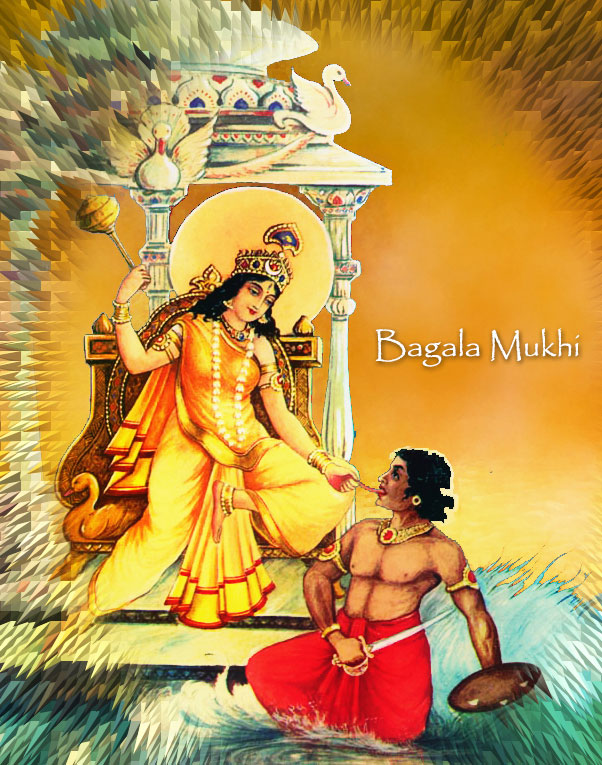 Yellow is the color associated with her. Here is a brief description of the Goddess's other prominent features from one of his meditative verses (Dhyana Sloka):

To finish off, in some ShAkta Agamas, like the Todala Tantram, each of the 10 MahavidyAs is associated with one of the Dasavataras of Vishnu as follows:

“Shri Devi said: Lord of Gods, Guru of the universe, tell me of the ten avatars. Now I want to hear of this, tell me of their true nature. Paramesvara, reveal to me which avatar goes with which Devi.

“Shri Shiva said: Tara Devi is the blue form, Bagala is the tortoise incarnation, Dhumavati is the boar, Chinnamasta is Nrisimha, Bhuvaneshvari is Vamana, Matangi is the Rama form, Tripura is Jamadagni, Bhairavi is Balabhadra, Mahalakshmi is Buddha, and Durga is the Kalki form. BhagavatÌ Kali is the Krishna murti.” (Todalatantra, chapter 10)

So, Goddess BagalAmukhi is associated with the Kurma Avatara of Vishnu.

14
What are the different branches of Shaktism?
5
What is the purpose of Maa Baglamukhi Yantra?

9
Who is sage Ganaka, the seer of so many mantras to Ganesha?
11
What scriptures describe the story of Vishnu's general, Vishvaksena?
2
Is Bala Tripurasundari the daughter Parvati?
6
When and why did Shiva take Arthanārīśvara form?
6
What is the story of Narasimha being born in the ocean?
8
Are the 10 Mahavidyas an expansion of Goddess Sati or that of Goddess Shakambhari?
7
When Goddess Parvati was the daughter of sage Bhrigu?