What is the actual definition of Vedanta?

There are many versions of Vedanta available and most of them have drastic differences and contradictions.

So is Vedanta is a loosely coined term or does it have a concrete definition?

What is its relation to the philosophy?

If veda-anta is something beyond/other than the Vedas then it cannot be called as vedanta at all.

Further, there are no divisions such ad Veda-aadi, veda-madhya then how come we have something like veda-anta?

If its a part of the Vedas then these philosophies also form the part of the so called KarmakAnda.

Vedanta (or Upanishad) literally means the end of Veda or the concluding portion of Vedas. Now this can have two meanings:

1) If Veda considered a book then Vedanta it's concluding chapters. In this case, there is virtually no difference between the two. So, there is no need to mention them separately when they are mentioned together.

2) Vedanta are the supplementary texts that are appended to the ends of Veda at a later period. Even saints like Rishi Aurobindo agrees with the Upanishadic period being much later to the Vedic period.

The conclusion 2 appears to me as much more reasonable.

Now, while its virtually impossible (IMHO) to prove that Upanishads or Vedanta are also a part of Vedas (i.e they are Sruti or heard by Rishis ) but indications which point to the opposite direction are many.

Therefore the Yogis that want rewards meditate Her, Who is of the nature of Vidyâ and Who is devoid of attributes. The best Munis, the knowers of the truths of Vedanta meditate on Her as formless, immutable, stainless, omnipresent Brahmâ devoid of all Dharma. She is described in some Vedas and Upanishads as full of Light (Tejas)

The Brâhmins, versed in the Vedas and Vedantas, are objects of venerations and must be worshipped. Give, then, them always according to merits, cows, lands, gold, etc. Don’t worship any Brâhmin who is illiterate. Don’t give to illiterates more than their belliful wants.

Now, if Vedanta=Vedas, then there remains no need to mention them separately in the same sentence. Right? But as you can see they are mentioned separately.

Even the Brihad Aranyaka Upanishad mention Vedas and Upanishads separately while mentioning them together. Following are the relevant verses from the Upanishad.

"As from a fire kindled with wet fuel various kinds of smoke issue forth, even so, my dear, the Rig—Veda, the Yajur—Veda, the Sama—Veda, the Atharvangirasa, history (itihasa), mythology (purana), the arts (vidya), the Upanishads, verses (slokas), aphorisms (sutras), elucidations (anuvyakhyanas) and explanations (vyakhyanas) are like the breath of this infinite Reality. From this Supreme Self are all these, indeed, breathed forth. (4.5.11)

Janaka, Emperor of Videha, rose from his lounge, humbly approached Yajnavalkya and said: "Salutation to you, O Yajnavalkya. Please instruct me." Yajnavalkya said: "Your Majesty, as one who wishes to go a long distance would procure a chariot or a ship, even so you have fully equipped your mind with so many secret names of Brahman. You are also honoured and wealthy; you have studied the Vedas and heard the Upanishads. But do you know where you will go when you are released from this body?"

The Vyasa Smriti also does the same:

Then having recited the Gayatri, the twice-born ones should commence the study of the Vedas. Having studied portion of the Saman, Yajus, and Atharvan, they should commence reading the Itihasas, Puranas and Upanishads, either entirely, or in parts, if a complete perusal is not feasible. This should be done every day. (910) (Vyasa Smriti)

So, option 2 is much more reasonable. They are appended later to the Vedas by the teachers so that the students can master the terse content of Vedas easily.

They are like appendices to the Vedas but very important texts none the less. 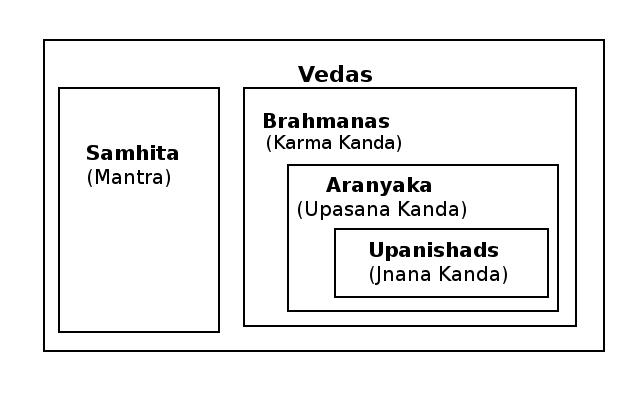 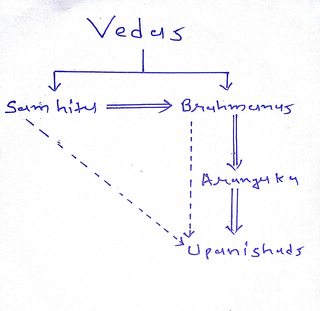 Upanishads are generally comes at the end of Vedas and Upanishads signifies (spiritual) conclusion i.e extract of Vedas. So, Upanishads themselves are called Vedanta.

Having without doubt well ascertained the significance of the knowledge of Vedanta the seekers, their minds purified by dint of renunciation, attain the worlds of the Brahman and when their body falls, their Atman being one with the highest immortal Brahma n are absolved all round.

VI-22: This highest mysticism, expounded in the Vedanta in a former age, should not be taught to one whose passions have not been subdued, nor to one who is not a worthy son, nor to an unworthy disciple.

Now, talking about Vedanta school of philosophy, there are six Astika schools of Philosophy associated with primary scripture (Sutra) and Rishi as follows:

Mimansa means profound thought or examination/investigation. As Keshav discussed in this, three mimansa has done on different part/aspects of Veda.

Brahma Sutra (also called Vedanta Sutra) systematizes and summarizes the philosophical and spiritual ideas in the Upanishads. So, it is considered very important text to understand the preaching of Upanishads.

Vedanta school is based on three (source) scriptures called Prasthanatrayi:

Hence, Vedanta by definition refers to Upanishads and as a schools, refers to philosophy/doctrine based on Prasthanatrayi.

You may refer Swami Vivekananda's lecture on Vedanta.

Regarding contradiction or differences among different Vedantic philosophy, as I discussed in this answer, (in the section "Requirement of Bhashya"), it is due to very subtle nature of Brahma Sutras and difference in interpretation by different Acharyas to prove doctrine. एकं सद्विप्रा बहुधा वदन्ति (Rigveda 1.164.46).

0
What defines the Vedanta school?
20
What is difference between Shruti and Smriti?
21
Dvaita vs Advaita vs Vishistadvaita vs Shuddhadvaita vs any other
14
Vedas and their philosophy
9
What are the Vedas technically? How can Upanishads be called Vedas when some parts are neither revelations nor hymns dedicated to any specific deity?
7
Why did Vedvyasa mention his shishya Jaimini's opinion/saying in Brahma Sutra?

27
What percentage of Hindus belong to a sect that subscribes to the Vedanta school?
11
What is Ramanujacharya's argument that the Upanishads must be true if they grant Moksha?
9
What are the Vedas technically? How can Upanishads be called Vedas when some parts are neither revelations nor hymns dedicated to any specific deity?
3
How has the Vedanta school refuted Mimamsa arguments for multiple omnipresent souls?
2
Do all Vedantic philosophies agree on the number of Pramanas?
2
What is vedAdi?