What was the real story of Bhima's oath about drinking DushAsana's blood? Are there other such instances in mythology?

According to this video from BR Chopara's MahAbhArata, Bhima is seen taking a fierce oath. Earlier he also suggested of cutting Dushasana's hand which dragged Draupadi.
In this episode, Bhima is seen acting upon the oath.

Bhima's oath shown in the video is almost according to the scripture. After Draupadi's insult, it happens:

And Bhima said,--Hear these words of mine, ye Kshatriyas of the world. Words such as these were never before uttered by other men, nor will anybody in the future ever utter them. Ye lords of earth, if having spoken these words I do not accomplish them hereafter, let me not obtain the region of my deceased ancestors. Tearing open in battle, by sheer force, the breast of this wretch, this wicked-minded scoundrel of the Bharata race, if I do not drink his life-blood, let me not obtain the region of my ancestors. [source]

The fight is also according to the scripture. Later during the war, Bhima did act on his oath, however he didn't severe his hand as shown in the video. Rather he decapitates DushAsana:

Bhima, in that dreadful battle, hurled his mace at the prince. With that weapon, Bhimasena forcibly threw Duhshasana down from his car at a distance measured by the length of ten bows. ... Addressing Karna and Suyodhana and Kripa and Drona's son and Kritavarma, he said, "Today I shall slay the wretched Duhshasana. Let all the warriors protect him (if they can)." ... Drawing then his whetted sword of keen edge, and trembling with rage, he placed his foot upon the throat of Duhshasana, and ripping open the breast of his enemy stretched on the ground, quaffed his warm life-blood. Then throwing him down and cutting off, O king, with that sword the head of thy son, Bhima of great intelligence, desirous of accomplishing his vow, again quaffed his enemy's blood little by little, as if for enjoying its taste. ... Indeed, all those that stood around Bhima and beheld him drink the blood of Duhshasana, fled away ... [source]

However Bhima didn't really drink the blood. He just inacted it for the sake of oath.
That's a less known story. Here is that clarification in his own words & it's less likely to be due to his real fear of GAndhAri's supposed curse:

Hearing these words of Gandhari, Bhimasena, looking like one in fright, said these words for soothing her, ‘Be the act righteous or unrighteous, it was done by me through fear and for the object of protecting my own self. It behoveth thee therefore, to forgive me now. ... Gandhari said, ... he did not deserve such a death. He, however, did all that thou tellest me. ... thou quaffedst in battle the blood from Duhshasana’s body! Such an act is cruel and is censured by the good. ... Bhima replied, saying, ‘It is improper to quaff the blood of even a stranger, what then need be said about quaffing the blood of one’s own self? One’s brother, again, is like one’s own self. There is no difference between them. The blood, however, (that I am regarded to have quaffed) did not, O mother, pass down my lips and teeth. Karna knew this well. My hands only were smeared with (Duhshasana’s) blood... [source]

The other such instance more from the mythology perspective, is blood being drunk of Raktabija.

Raktabīja had a boon that whenever a drop of his blood fell on the ground, a duplicate Raktabīja would be born at that spot. Raktabīja was wounded, but drops of blood falling on the ground created innumerable other Raktabījas, and Durga was in difficulty. At this point, the goddess created Rakteshwari, who stretched her tongue over the earth and licked up each drop of blood pouring from Raktabīja's body and devoured his duplicates into her gaping mouth.

From Wikipedia of Kali as slayer of Raktabija the story is slightly different though.

In today's world we may consider "Raktabija" as a some kind of disease, which virally infects via blood (e.g. AIDS).

The real reason Bhima vowed to kill Dussasana had nothing to do with Draupadi. It was because Dussassana mocked, insulted and laughed at the Pandavas while they were going to exile after the 2nd game of dice.

"Thus did Dussasana, the son of Dhritarashtra, utter in the hearing of the Pandavas, harsh words of the most cruel import. And hearing them, the unforbearing Bhima, in wrath suddenly approaching that prince like a Himalayan lion upon a jackal, loudly and chastisingly rebuked him in these words,--Wicked-minded villain, ravest thou so in words that are uttered alone by the sinful? Boastest thou thus in the midst of the kings, advanced as thou art by the skill of the king of Gandhara. As thou piercest our hearts hear with these thy arrowy words, so shall I pierce thy heart in battle, recalling all this to thy mind. And they also who from anger or covetousness are walking behind thee as thy protectors,--them also shall I send to the abode of Yama with their descendants and relatives."

Vaisampayana continued,--Unto Bhima dressed in deer-skins and uttering these words of wrath without doing any thing, for he could not deviate from the path of virtue, Dussasana abandoning all sense of shame, dancing around the Kurus, loudly said, 'O cow! O cow!'

Bhima at this once more said,--Wretch darest thou, O Dussasana, use harsh words as these? Whom doth it behove to boast, thus having won wealth by foul means? I tell thee that if Vrikodara, the son of Pritha, drinketh not thy life-blood, piercing open thy breast in battle, let him not

attain to regions of blessedness, I tell thee truly that by slaying the sons of Dhritarashtra in battle, before the very eyes of all the warriors, I shall pacify this wrath of mine soon enough.'"

Now this is the true incident of Bhima’s pratigya. 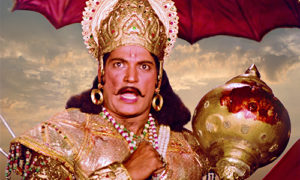 Not the answer you're looking for? Browse other questions tagged scripture mahabharata war bhima .

14
What exactly is the basis/reason behind calling Hindu epics such as Ramayana and Mahabharata as myths/mythology
3
What is the significance of yaksha prashna? Are there any other such prominent scenarios?
5
What do the Azhvars say about Draupadi Sharanagati?
1
Where are all the incidents mentioned by Dhritarashtra in the Mahabharata?
12
Is there any story in scriptures about the origin of peacocks?
10
What are the instances where Lord Shiva was found laughing?
8
Is Draupadi the daughter of Nala and Damayanti in her previous life?
11
What was the symbolism of Ashwatthama's story?