Do all Vedantic philosophies agree on the number of Pramanas?

As I discuss in this question, by far the most popular school of Hindu philosophy is the Vedanta school, which bases its tenets on the doctrines laid out in the Brahma Sutras, a work by the sage Vyasa that summarizes and systematizes the philosophical teachings of the Upanishads. (You can read the Brahma Sutras here.) I'm interested in the epistemology of the Vedanta school.

Now Narayana Bhattar was a mathematician, philosopher, and poet who is most famous for the Narayaneeyam, a poem summarizing the Srimad Bhagavatam. But he also wrote a work on the Purva Mimamsa school, the Manemyodaya. In this excerpt from the Manameyodaya, Narayana Bhattar discusses the Pramanas or means of valid knowledge accepted by different schools of Indian philosophy:

Perception and inference, similarly authority and analogy, presumption and negation - these are the six means of valid knowledge for those who think like us. Charvakas speak of one; the Buddhists and the Vaisheshikas speak of two; Bhasarvajna and the Samkhyas speak of three; Udayana and others speak of four; the followers of Prabhakara speak of five; we and those well-versed in Vedanta speak of six; the Pauranikas, however, speak of eight, adding inclusion and tradition. 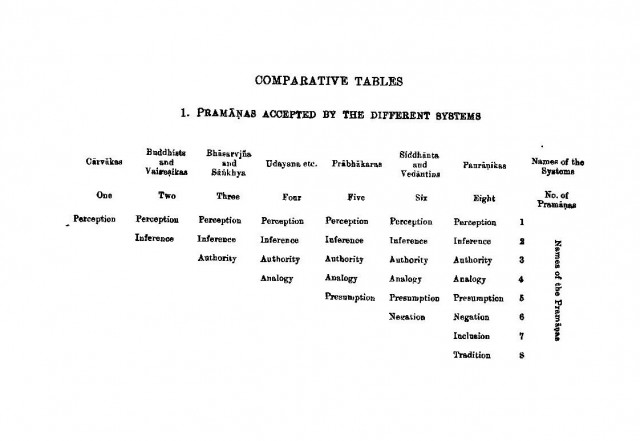 I'm interested in the part in bold. The "we" refers to the followers of the Purva Mimamsa philosopher Kumarila Bhatta. Narayana Bhattar is saying that the Vedanta school accepts the same six Pramanas that Kumarila Bhatta does: Pratyaksha or perception, Anumana or inference, Shabda or authority, Upamana or analogy, Arthapatti or presumption, and Anupalabdhi or negation.

If different Vedantic philosophies do differ on this, then the figure of six Pramanas would probably be for Advaita, since I've heard that Narayana Bhattar may have been an Advaitin.

Most Vedantic philosophies other than Advaita agree on the number of Pramanas. As I suspected, Advaita accepts the same six Pramanas as Kumarila Bhatta; here's what the 17th century Advaita philosopher Dharmaraja Adhavindra says in this excerpt from his Vedanta Paribhasha:

Those means of knowledge are six in number, their divisions being perception, inference, comparison, verbal testimony, presumption and non-apprehension.

I also found out from this forum post that this is summarized in an Advaita saying "Vyavahare Bhattanayah", which means that from the relative perspective, Advaitins agree with Kumarila Bhatta.

But apart from Advaitins, most if not all other members of the Vedanta school agree on the number of Pramanas. Specifically, they agree with the Samkhya school's view that there are three Pramanas: Pratyaksha or perception, Anumana or inference, and Shabda or scriptural testimony. Let me go through various Vedantic philosophies one by one.

Not the answer you're looking for? Browse other questions tagged philosophy vedanta advaita purva-mimamsa pramana .

5
Who believes in 10 Pramanas?
6
Did Vyasa and Baudhayana believe in 10 Pramanas and 8 Pramanas respectively?
6
What is the story of Dattatreya defending the Vedas?
4
If I consider only Isha Upanishad as infallible canonical pramana, will I be (scripturally) considered a valid Hindu/Sanatani?
4
Who is the earliest Advaitin to mention six Pramanas?
3
What are the Shaivite/Shakta arguments for gestures as a Pramana?

5
Did Kumarila Bhatta believe in Nishkama Karma as a valid means to Moksha?
5
Who believes in 10 Pramanas?
5
How do different Astika schools prove the existence of the soul?