Kind, ever gracious be the Earth we tread on, the firm Earth, Prithivī, borne up by Order, mother of plants and herbs, the all-producer---- Griffith Translation.

No Atharva Veda is not saying earth is fixed in 12.1.17. The verse is a prayer for the Mother earth OR Mother Land , Its said “ Let the Mother Earth be broad and stable upon which ample kind of plants and Medicinal Herbs grow. She is praised the one who bestow us the means of material pleasure. Lets see how …

Let the Mother Earth be stable and broad Upon which the best of Medicinal plants grow. Let us serve the Motherland , The Mother Earth who bestow us with means of material pleasure which are full of Knowledge ,Bravery ,Truth , Love and other good qualities.

Now here Atharva-Veda prays for Mother earth to be stable. What is this “Stable” means ? What is the meaning of stable here. Here stable word is used for constant , continuous. Let her be continuous in her activity of producing plants and medicinal plants.

The word Stable is not used as fixed or Non-Moving because if we look at the next verse , we can find two times clearly mentioning of earth is moving in the sky with great velocity. So its not possible that the previous shloka is saying that earth is fixed and the next is saying its moving with great speed.

The other meaning of this stable word could also be taken as " Not changing its physical form e.g soil , weather , productivity ,shape etc. We can explain this verse in many such a ways.But I think in that verse of A.V. all such possible meanings are taken into consideration ,as to show that how earth is best sutaible planet for habitation.

This is the next verse-

O Mother earth | You give us the place to live. Your speed is tremendous , with which you move in the sky while making lots of vibrations. Indra protects you with great care. Your diving glow is like a gold. Please make us lustrous like you. Let us be free of envy toward each other . Let us be dear to all .

So its pretty much clear that Av 12.1.17 isn’t saying earth is fixed. In fact the sukta is reveling that earth is moving in sky with great speed thousands of years before the modern cosmology. 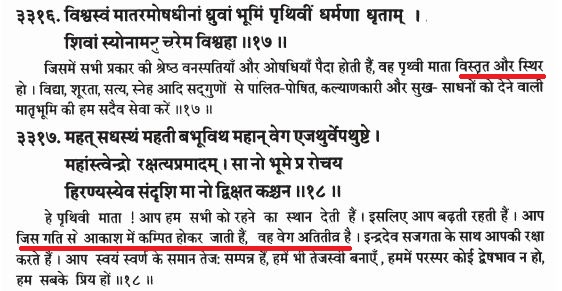 Atharva Veda 12.1.17. Upon the firm, broad earth, the all-begetting mother of the plants, that is supported by (divine) law, upon her, propitious and kind, may we ever pass-our lives!

May we, in all the ways follow that motherland who produces and possesses all terrestrial objects is the mother of all herbs, who affords firm stand to all creatures, who is upheld by righteousness, and who is auspicious, charming and spacious

The translation of Vaidyanath clearly says Earth affords firmly stand to all creatures. It doesn't say Earth itself static or fixed.

There is no fixed or immovable earth here.

Not the answer you're looking for? Browse other questions tagged science atharva-veda .

8
Do Vedas say Earth is static?