What is the meaning behind Shiva with 26 heads and 52 hands?

I was wondering what the meaning is behind Shiva's 26 heads and 52 hands in a temple in Tamil Nadu? I have never seen him in this form before.

He is known as: 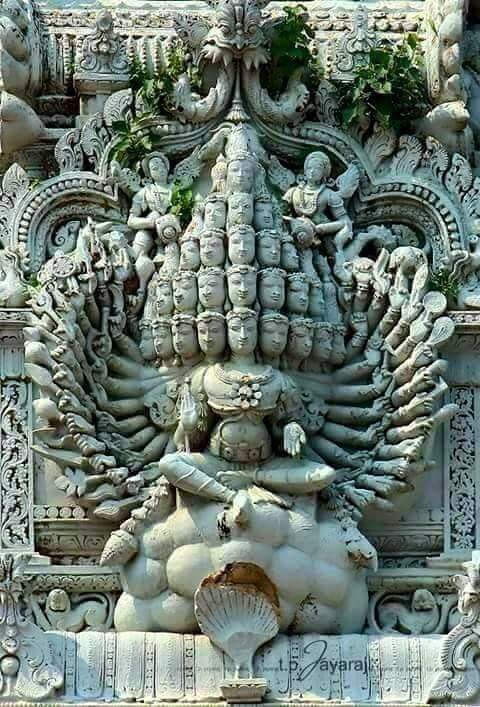 Maha sadashiva is an extended form of Sadashiva.

Sadasiva (Sanskrit: चताशिव, Catāśiva, Tamil: சதாசிவம் ), is the Supreme Being Lord Parashivam in the Mantra marga Siddhanta sect of Shaivism. Sadasiva is the omnipotent, subtle, lumnious absolute. The highest manifestation of almighty who is blessing with Anugraha or grace, the fifth of Panchakritya - "Holy five acts" of Shiva. Sadasiva is usually depicted having five faces and ten hands, is also considered as the one of 25 Maheshwara murtams of Lord Shiva. Sivagamas conclude, Shiva Lingam, especially Mukhalingam, is the another form of Sadasiva
[...]
Another variation of Sadasiva later evolved into another form of Shiva known as Mahasadasiva, in which Shiva is depicted with twenty five heads with seventy-seven eyes and fifty arms.

From Sanskrit, Maha means greater. Hence Maha sadhashiva is a greater form of Sadashiva. The significance is similar to Sadashiva. See this other post from Tezz What are the symbols and weapons in the hand of Sadashiva?.

He is known to have twenty five heads with seventy-seven eyes and fifty arms. (Even though the number is supposed to be infinite) This blog is a nice read on that topic http://temple.dinamalar.com/en/news_detail.php?id=626. He has been mentioned in the Agamas. From the pages 57 and 58 of the book The Complete Hindoo Pantheon, Comprising the Principal Deities Worshipped by the Natives of British India Throughout Hindoostan: 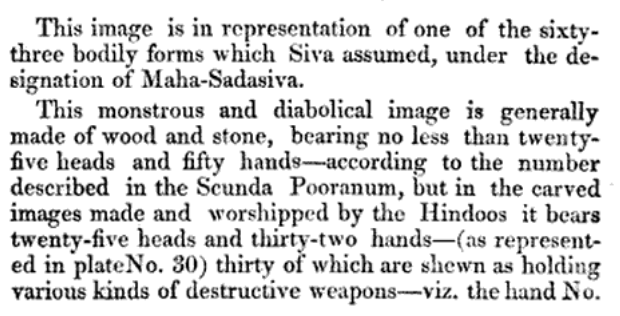 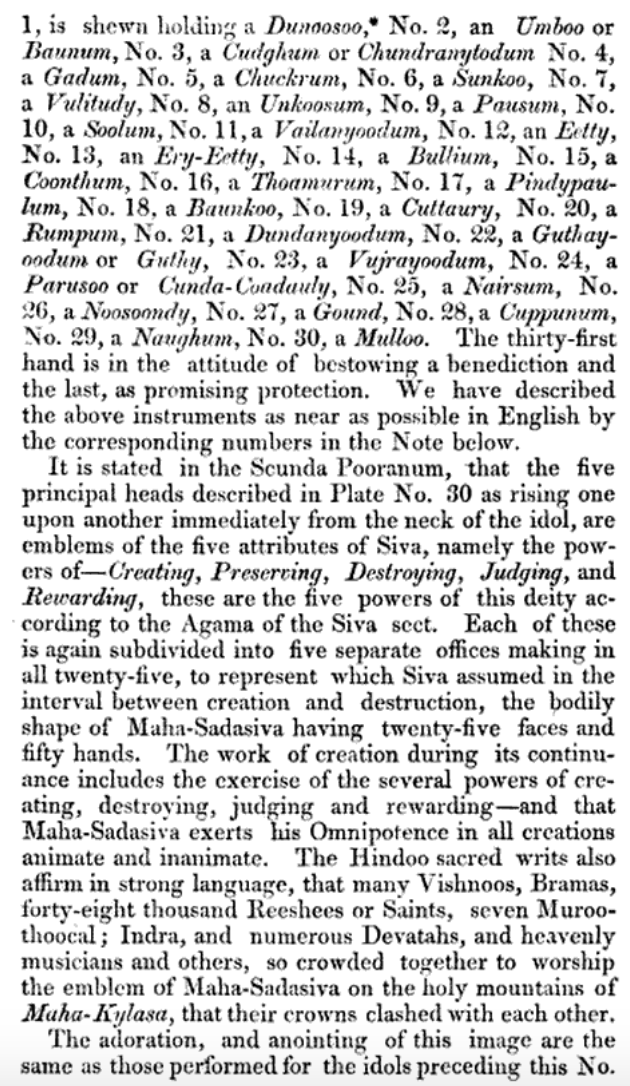 This image is in representation of one of the sixty-three bodily forms which Siva assumed, under the designation of Maha-Sadasiva. This monstrous and diabolical image is generally made of wood and stone, bearing no less than twenty-five heads and fifty hands according to the number described in the Skanda Puranam, but in the carved images made and worshipped by the Hindus, it bears twenty-five heads and thirty-two hands—(as represented in plateNo. 30) thirty of which arc shown as holding various kinds of destructive weapons—viz. the hand No. 1, is shewn holding a Dhanussu (A bow),* No. 2, an Anbu or Banum (Arrow), No. 3, a Cudghum or Chundranytodunt (Sword) No. 4, a Gadum, (Mace) No. 5, a Chakram (discus), No. 6, a Sunkoo (Conch), No. 7, a Vultidy, No. 8, an Unkoosum (Goad), No. 9, a Pausum (A rope), No. 10, a Shoolam (trident), No. 11,a Velayudhum (spear), No. 12, an Belly, No. 13, an Pry-Betty, No. 14, allium, No. 15, a Coonthum, No. 16, a Thoamaram, No. 17, a Pitulypatt-lum, No. 18, a Baunkoo, No. 19, a Cut/a:cry, No. 20, a Bumpum, No. 21, a Dundanyoodutn, No. 22, a Guthay-oodum or Guthy, No. 23, a Vujrayoodum, No. 24, a Parashu (axe) or Cunda-Coadauly, No. 25, a Nairstsm, No. 26, a Nuosoondy, No. 27, a Gound, No. 28, a Cuppunum, No. 29, a Nattykum, No. 30, a Malloo. The thirty-first hand is in the attitude of bestowing a benediction and the lust, as promising protection. We have described the above instruments as near as possible in English by the corresponding numbers in the Note below. It is stated in the Scunda Pooranum, that the five principal heads described in Plate No. 30 as rising one upon another immediately from the neck of the idol, are emblems of the five attributes of Siva, namely the pow-ers of-Creating, Preserving, Destroying, Judging, and Rewarding, these are the five powers of this deity ac-cording to the Agama of the Siva sect. Each of these is again subdivided into five separate offices making in all twenty-five, to represent which Siva assumed in the interval between creation and destruction, the bodily shape of Maha-Sadasiva having twenty-five faces and fifty hands. The work of creation during its continuance includes the exercise of the several powers of creating, destroying, judging and rewarding—and that Maha-Sadasiva exerts his Omnipotence in all creations animate and inanimate. The liindoo sacred writs also affirm in strong language, that many Vishnus, Brahmas, forty-eight thousand Rishis or Saints, seven Muroo-thoocal ; Indra, and numerous Devatahs, and heavenly musicians and others, so crowded together to worship the emblem of Maha-Sadasiva on the holy mountains of Maha-Kailasa, that their crowns clashed with each other. The adoration, and anointing of this image are the same as those performed for the idols preceding this No.

The significance of each of the different 25 heads as mentioned in a blog are:

Not the answer you're looking for? Browse other questions tagged shiva temple symbolism .

1
What is the difference between Sada-Shiva (सदाशिव) & Maha-Sada-Shiva (महासदाशिव)? And which scriptures discuss their iconography?
21
What names of Lord Shiva used today are from Vedas?
8
What are the symbols and weapons in the hand of Sadashiva?

11
What is the story behind Dhooli Darsanam in Srisailam?
6
What is the story behind Padmanabha Swamy?
8
Who is the sage Pundarika who saw Vishnu coming out of a Shiva Linga?
10
What is the story of Vishnu appearing to sage Markandeya in Thiruvidanthai?
8
Why does Periyalwar say that Krishna was born in Thirukottiyur rather than Mathura?
2
Varaha Deity and Muslim
9
Legend behind origin of Vayu Lingam in Srikalahasti and its meaning
6
What is Brihadishwara Temple?
8
What is Shiva doing in this picture from a temple?