Mahabharata mentions the Timingila and Makara as being deep within the ocean, along with other huge sea creatures:

“There were seen Timingilas, tortoises, Timi-timingilas and Makaras, that were like great rocks submerged in the water.” (Mahabharata, Vana Parva. 168.3)

Here what does the Makara mean?

Are these type of Sea creatures mentioned in scriptures like Mahabharata and Ramayana?

Makara means a crocodile or a shark. It might also mean a giant mythical being which carries Ganga devi. Also it is a constellation i nastrology which is the shape of a crocodile. Hence the name.

The word "Makara" is not only used in the Itihasa Mahabharata, it is used in Ramayana several times to indicate crocodiles and sharks.

That building surrounded by the wives of Ravana, by demonesses, and princesses brought by strength, was like an ocean filled with crocodiles, big fishes, sharks and other fishes, moved by the speed of wind, and together with serpents.

Here, nakra can also mean an alligator or a crocodile (According to Monier- williams dictionary 1899).

In the Yuddhakanda chapter 21 where Sri Rama aims Brahmastra towards the ocean god, makara is mentioned.

"O, Lakshmana! Behold now this ocean, having its water made suffocated soon with its crocodiles floated on all sides and broken asunder by my arrows".

Sometimes this is identified with a shark. In Bhagavad Gita, Krishna says, He is the shark among the fishes.

Of moving things, I am the wind. Among warriors I am Rama; among fishes, I am the shark, and amongst rivers, I am Ganga.

Sometimes Makara is identified as a mythological creature which is the vehicle of Ganga devi.

Śiśumāra is a porpoise which is the carrier of Varuna, the sea god. This is mentioned in the Vamana Purana chapter 9

Śiśumāra called jaladhi is the carriage of Varuna. It was originated from the ear wax of Rudra. It has dark complexion and divine speed.

Some Rakshasa soldiers rode on these porpoises. There is a mention of it in the Uttara Kanda of Ramayana.

And all the Rakshasas went covering the sky, some on asses, some on camels, some on horses, some on quick-coursing porpoises and some on huge serpents. And beholding Ravana proceed, hundreds of Daityas, inimical to the celestials, followed him. Having arrived at the city of Madhu and entered there the ten-necked demon did not behold Madhu but espied his sister.

When we take the context of the Mahabharata verse you quoted, the word Makara can mean a crocodile or a shark.

Arjuna continued, ' -------------------- And like unto flowing cliffs were seen on it heaving billows, now meeting together and now rolling away. And there (were seen) all around barks by thousands filled with gems. And there were seen timingilas and tortoises and makaras like unto rock submerged in water.

Makara is the word which is used to identify crocodile, shark, dolphin, etc. It doesn't mean dinosaur. Here in this verse of Bhagavad Gita, Makara is translated as shark.

Of puriﬁers I am the wind, of the wielders of weapons I am Rāma, of aquatics I am the shark, and of ﬂowing rivers I am the Ganges.---BG 10.31

Makara is considered to be a combination of terrestrial and aquatic animals. In our scriptures there is quite a lot of mentions on makara.

Makara, is also shown as carrier of Ganga, the river and also of the sea god Varuna. Kamadeva or Manmadha (Cupid)’s flag is called makara-dhwaja, a flag having the Makara drawn on it.

In Bhagavata Purana, Makaras and Timingila are described as predators, attacking Markandeya Rishi

There is a lot of information about Makara in the following link.

Just to make a small post, i won't put other makara information given on the scriptures. This has been done by other answerers.

When Hanuman sat lanka on fire by his tail, he dipped into a river to relax. While he was in the river,a drop of his perspiration fell into the water and was later consumed by an aquatic animal. The reptile then got fertilized and later Hanuman's son Makardhwaja was born.

Besides above information, the word makara also means Capricorn zodiac sign. In yoga, there is an asan called makara asana which means crocodile pose.

In yoga, we have two kinds of bodies, one is the physical and tangible body and another is the energetic and subtle body. Along the midline of the subtle body – within the spine – lie seven subtle energy centres, the chakras. There are seven main chakras.

The second chakra or the SVADHISHTHANA CHAKRA has a circle that represents the element water, is to be colored white. The crescent inside the circle is associated with the moon and so it is colored silver.

In the image shown below, the crocodile (rather makara) represents sexual vigor>

The source for above information can be found below. https://en.oum.ru/literature/yoga/chakras-energy-centers-of-transformation-harish-johari/?sphrase_id=1692571 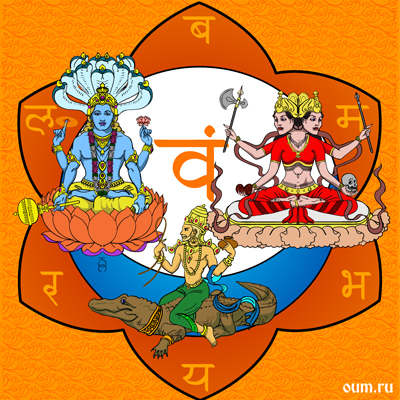 For some additional info, Makara can also be seen in many other different cultures. Below is an image where multiheaded naga is coming out of a makara's mouth. 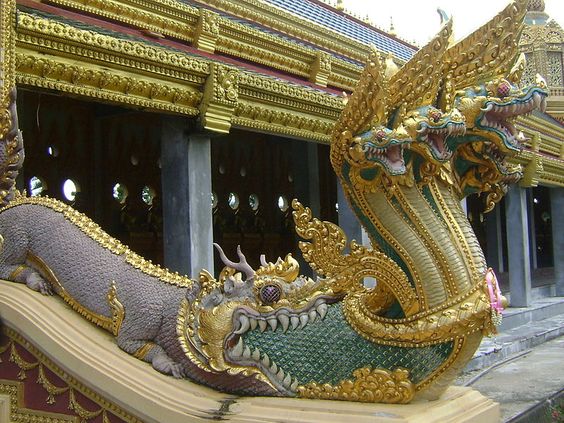 A lot of different makara pictures and information can be found in the book Way of the Ancient Healer: Sacred Teachings from the Philippine Ancestral Traditions

This book has a lot of information about makara, makara with respect to hinduism and makara on different cultures.

Makara is the Sanskrit word for crocodile / alligator. Giant crocodiles existed in pre-historic times. With their snouts just above the water they could be mistaken for submerged rocks as they stay immobile for hours on end. Makara is the mount (Vahana) of both Ganga and sea god Varuna.

Timingilaas are giant whales like blue whale, etc. The Tamil word for whales is 'Timingalams'.

All are sea dwellers and aquatic creatures.

Not the answer you're looking for? Browse other questions tagged scripture animals .

6
Do Hindu scriptures acknowledge the presence of Dinosaurs?

19
What scriptures describe Shanta as Dasharatha's daughter?
9
Are there references to sharks or dolphins in hindu mythology?
9
Is Devika river mentioned in any Hindu scripture?
12
How does the soul returns in the dead body when a dead person is revived using Amrita?
8
Regent Kings/Queens in Hindu Mythology
7
Forests mentioned in Hindu mythology
6
Do I commit a sin of greater degree when I kill a holy creature (say cow) instead of any other creature?