Why did Indra steal a wheel from the chariot of Surya?

The Rigved verse 5.29.10 talks about an interesting incident:

9 What time ye came with strong steeds swiftly speeding, O Uśanā and Indra, to the dwelling, Thou camest thither -conquering together with Kutsa and the Gods: thou slewest Śuṣṇa.

10 One car-wheel of the Sun thou rolledst forward, and one thou settest free to move for Kutsa. Thou slewest noseless Dasyus with thy weapon, and in their home o’erthrewest hostile speakers.

My question is what is the story behind Indra taking away one wheel of the Sun's chariot for his friend Kutsa?

Your enquiry is about the story of this incidence. Here in the above verse we find the description of Indra taking away one wheel of the Sun's chariot for his friend Kutsa to defeat his enemies. . But there is also a background to this story , which is associated with Rishi Etesha एतेश and the the reason can be found in various mantras of vedas ,which tells us the story in brief.

Now unto him of these things hath been given what he, who rules alone o'er much, electeth. Indra helped Etasa, the Soma presser, contending in the chariot-race with Sūrya.

And here is Hindi Translation of above verse.

11 When night was near its close he carried forward e’en the Sun's chariot backward in its running. Etaga brought his wheel and firmly stays it: setting it eastward he shall give us courage.

When the Indra and Rishi Etesha were competing Indra did stopped the Surya's chariot which was coming from the front of the Rishi Etesha to protect him as described in Rig-Veda Mandala 5 - Sukata 29-Mantra 5.

5 Thus all the Gods, O Maghavan, delivered to thee of their free will the draught of Soma; When thou for Etaśa didst cause to tarry the flying mares of Sūrya racing forward.

This is clear from another translation of Rig-Veda By Dr. Ganga Sahai Sharma - See Page 622.

In all this Indra did tried to protect Rishi Etesha from Surya's chariot. Rig-Veda Mandala 4- Sukta 30 - Mantra -6 tells us that

6 When also for a mortal man, Indra, thou speddest forth the Sun, And holpest Etaśa with might.

Here is Hindi translation of above. 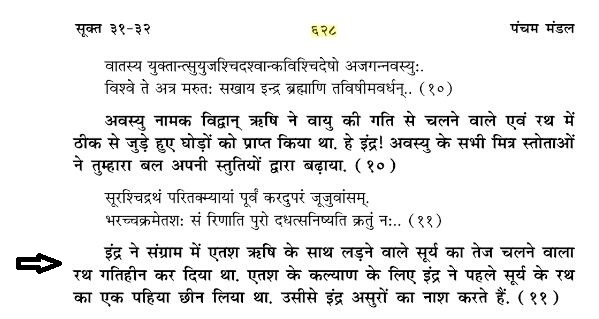 Lord Indra aided Kutsa in defeating Shushna, Kuyava, and Dasyus by the help of Lord Surya chariot wheel on a single day. This story is mentioned in Rig veda, Mandala 4, Hymn 16.

With a mind resolved on killing the Dasyu, you came (to his dwelling), and Kutsa was eager for your friendship now have you two alighted in his, (Indras), habitation, and being entirely similar in form the truthful woman has been perplexed (to discriminate between you).

You go with Kutsa in the same chariot, determined to defend him (you) who are the tormentor (of foes), the lord of horses (of the speech) of the wind on the, same day wherein, yoking (to the car) the straight-goign steeds, as if to receive food, the sage (Kutsa) has been enabled to cross over (the sea) of calamity.

For Kutsa, you have slain the unhappy Susna and in the forepart of the day, attended by thousands (you have slain) Kuyava with thunderbolt you have swiftly destroyed the Dasyus, and you have cut them to pieces in the battle, ,with the wheel (of the chariot of) the sun.

8
Who was Rishi Etesha and why was he racing with Surya?
7
What is the story of Indra, Kutsa & the Gandharva?

10
Why is the Vedic Indra so different from the Puranic Indra?
3
Was Indra born from his mother's side and did she die in child-birth?
5
Did Indra kill his father by throwing him down from heaven?
9
Who did Indra receive a prophecy from in a golden ship?
5
Why did Indra flee after slaying Vritra and why did he cook dog meat?
6
What is the story of the Naga Padmanabha dragging the chariot of Surya?
5
Who is Kutsa and how did Indra beat him?
12
Why is Surya referred to as Martanda?
7
Was the Atharva Veda compiled at the time of King Parikshit?