What is the purpose of Lord Krishna favorite things?

Krishna (Sanskrit: कृष्ण) is the god of compassion, tenderness, and love in Hinduism. He is one of the most widely revered and popular Indian divinities, worshiped as the eighth incarnation of the Hindu god Vishnu and also as the supreme God in his own right. (Wiki Source)

Lord Krishna always assures the world to save from demons and evil force, every time they appear to disturb the earth.

Here is my questions:

1) What is the purpose of Lord Krishna holding a flute and wear a peacock feather on crown?

2) What is significance of Favorite Leaf (Tulasi) and Favorite Color (Yellow)?

Krishna holding a flute is the reference to his transcendental beauty and divine radiations. Anyone who is devoted enough can even feel the Lord from thousands of miles apart with mere Bhakti, as allegorical to someone hearing His flute from a distance whenever He plays it. Everybody used to be enchanted by His music, which is again allegorical to Divine Ecstasy/Samadhi etc. The vibrations of Krishna's music is allegorical to the Universal Vibration - Omkara. Hence Krishna denotes the Supreme Reality who is the Ultimate and from Whom is born Om Itself. It is said that sometimes he talked to his dearest spiritual companion Radha through the flute tunes which only she understood. Again a sign that Bhaktas understand the subtle ways of the Lord which no one else does.

Once, Lord Krishna asked his devotees what they would like to become in his hands. Some said the lotus, some the conch, some the chakra and so on, but no one mentioned the flute. Krishna advised them to become his flute. In his discourse to his devotees, he said that:

In the human personality structure, as in the flute, there are 8 main spots: The five organs of perception, mind, intellect, and ego. If you get rid of your ego and become like a hollow reed flute, then the Lord will come to you, pick you up, put his lips and breathe through you and out of the hollowness of your heart, the captivating melody will emerge for all creations to enjoy. But if you will continue your attitude of dislike, hatred and jealousy, the Lord will distance himself from you, since you will be useless for his purpose.

Besides, the bamboo flute is the only musical instrument which is most natural and does not contain any mechanical parts. This is the reason the flute is very close to Nature and sounds very melodious when played in an atmosphere surrounded by Nature. Flute has been mentioned in the Puranas which were written thousands of years ago.

This body is the flute of Krishna in the microcosm. If you can destroy your egoism and have total self-surrender, unreserved atma-nivedan to the Lord, he will play on the body flute and bring out melodious tunes. You will become merged in his will. He will work unhampered through your instruments – body, mind and senses. You can rest very peacefully then without care, worry or anxiety. You can watch the play of the universe as a sakshi, witness. Then your sadhana will go forward by leaps and bounds because the divine will and grace will work through you. In fact, you need not do any sadhana at all, only practise self-surrender from the very core of your heart, with all your being. Learn the lesson from the flute and follow its ways. If you have offered yourself at the feet of Krishna, you have already reached the goal, you have already attained the realm of peace, the kingdom of immortality. You have found the joy that never fades, a life that never dies. You have reached the other shore of fearlessness, which is beyond darkness, despair, doubt, grief, sorrow, pain and delusion.

It is a symbol of beauty and knowledge. The eye in the feather represents the divine wisdom or the third eye of Krishna. It helps one attain the supreme knowledge of the self. It symbolically states that wisdom of the mind and love of the heart makes one existence whole and for this blessed state, it is very important to worship the Lord adorned with his feathers. A peacock feather keeps lizards (predators) away. It also symbolizes the (obvious) power of Krishna over negative harmful energies.

The feathers stand for beauty, richness in life, felicity and joy. The dark colors in it stand for sorrow, sadness and the bright colors for happiness, symbolizing that life comes with both happiness and sorrow and when one worships Krishna with peacock feather; one attains equanimity of mind, accepts life and learns to surrender to the Lord. 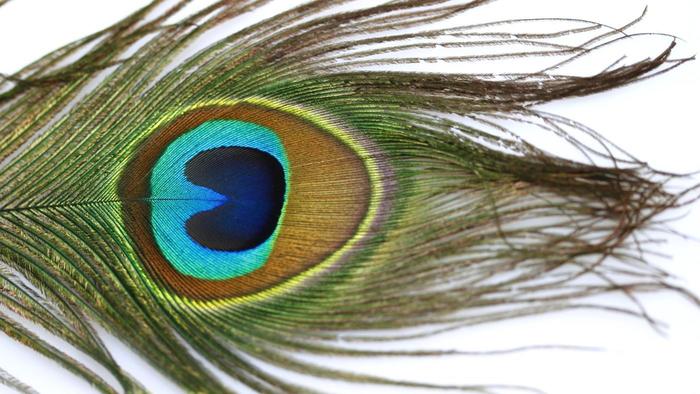 In this picture, there are many strands converging into the egg shaped center of the feather. This symbolizes the convergence of every walks of life into the Ultimate center of Consciousness i.e. the Self. The blue center represents realization of the Absolute.

THE STORY OF TULSI is very expansive to write down here. You can read it in this site:

In Hinduism, the colour yellow signifies knowledge and learning. It symbolizes happiness, peace, mental development and competence. It is the colour of spring and activates the mind. Lord Krishna might seem very shrewd and cunning when it comes to such; but in reality He isn't such. He is dearest even to someone who worships Him with only one leaf with devotion.

Whatever a man offers to me, whether it be leaf or flower, fruit or water, I accept it. Because its offered with devotion and purity of mind.

If you commit a mistake, but ultimately realize it and repent by asking for forgiveness from Krishna; then just close your eyes and be assured that He is going to forgive you no matter what. Krishna is all-lovable and all-loving. He is the personification of "prema" itself, as is Rama.

In fact the above goes for any God you wish to choose as your chosen deity - Ishta. With Bhakti, anyone of them can bestow upon you the same liberation which Krishna can. It may not be a flute; it might be a bow and arrow, or a trident (trishul) or even a Goddess with 10 arms holding various weapons.

"I call him Rama. You can call him by any other name but have faith in Him, surrender all worldly desires and passions to his will and without effort, become disciplined and principled."

Not the answer you're looking for? Browse other questions tagged vishnu krishna gods .

11
Why does Lord Krishna wear peacock feather on His head?

13
Why does Vishnu have eight arms when Krishna and Arjuna go to see him?
11
Why does Lord Krishna wear peacock feather on His head?
9
What is the purpose of Balarama's avatara?
8
What is the story and purpose of Lord Vishnu's Vaikuntha avatara?
4
Is Krishna the Lord of this universe only?
3
Did Lord Krishna cry ever?