We all know that Narada, Vedic sage who plays a prominent role in a number of Hinduism's earliest texts, notably the Ramayana and the Bhagavata Purana.

Why he is called as Narad Muni?

And why he always carries a Veena with him? 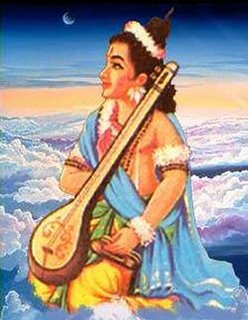 As far as the Veena goes, Narada uses his Veene, called the Mahati, to provide musical accompaniments for his songs about Vishnu. Apparently Narada is credited with the origin of the Veena. This book summarizes a story from the Vayu Purana about how the Veena started being played by humans (pages 917-918):

The following story occurs in the Vayu Purana as to how Narada's Vina became the musical instrument of the world. Once Narada was in Indra's court when the latter asked Urvasi to give a dance performance. She did so and in the course saw Jayanta, son of Indra seated before her. She was swept over by a passion for Jayanta as a result of which some mistakes were made by her in dancing. Narada, who was playing his Veena called Mahati, also committed mistakes. Narada did so to attract the attention of the audience to Urvasi's mistakes. Noticing the mistakes, Agastya, who too was present on the occasion, cursed Urvasi to become a baboo. He cursed that Narada's Vina should become the Vina of the world[.]

Narada as we know him now was actually a normal boy of a maidservant in his previous birth. Due to association with some asectics he devloped faith in God and practiced meditation and austerity. Pleased by his devotion, Vishnu appeared before him for one time and said that only in his next birth he will be able to associate with God. So Narada led that life as an ascetic (muni) singing the flories of Lord. When after pralaya (annihilation of the whole universe), when creation began next time, Narada in his present form came into existence along with the other rishis:

After 4,300,000,000 solar years, when Brahmā awoke to create again by the will of the Lord, all the ṛṣis like Marīci, Aṅgirā, Atri and so on were created from the transcendental body of the Lord, and I also appeared along with them. [SB - 1.6.30]

So Narada is known as a muni. And regarding his Veena, it was given to Him by God:

And thus I travel, constantly singing the transcendental message of the glories of the Lord, vibrating this instrument called a vīṇā, which is charged with transcendental sound and which was given to me by Lord Kṛṣṇa. [SB - 1.6.32]

The Linga Puran chapter 2.3 has also description regarding how Narada as an ascetic performed penance and obtained his musical skills. I'll add it when I have made the translations.

Not the answer you're looking for? Browse other questions tagged narada .

9
Where does Narad muni live?
7
Why does Vishnu's thousand-armed Aniruddha form carry the equipment of a student?
4
What was the discussion between Narada muni and Yudhishtira about dharma?
10
Parents of Narada muni?
8
Who gave veena to Narada muni?
4
Who is narada muni and who is father and mother of narada muni ?
3
Why is Narada Muni respected by all?