Ramana Maharshi was an enlightened master from the last century, what technique did he prescribe to know the self or become self realized?

From the book Who am I. His technique name is Self inquiry.

Que:10. How will the mind become quiescent?
Ramana: By the inquiry ‘Who am I?’. The thought ‘who am I?’ will destroy all other thoughts, and like the stick used for stirring the burning pyre, it will itself in the end get destroyed. Then, there will arise Self-realization.
Ques:11. What is the means for constantly holding on to the thought ‘Who am I?’
Ramana: When other thoughts arise, one should not pursue them, but should inquire: ‘To whom do they arise?’ It does not matter how many thoughts arise. As each thought arises, one should inquire with diligence, “To whom has this thought arisen?”. The answer that would emerge would be “To me”. Thereupon if one inquires “Who am I?”, the mind will go back to its source; and the thought that arose will become quiescent. With repeated practice in this manner, the mind will develop the skill to stay in its source. When the mind that is subtle goes out through the brain and the senseorgans, the gross names and forms appear; when it stays in the heart, the names and forms disappear. Not letting the mind go out, but retaining it in the Heart is what is called “inwardness” (antarmukha). Letting the mind go out of the Heart is known as “externalisation” (bahir-mukha). Thus, when the mind stays in the Heart, the ‘I’ which is the source of all thoughts will go, and the Self which ever exists will shine. Whatever one does, one should do without the egoity “I”. If one acts in that way, all will appear as of the nature of Siva (God). 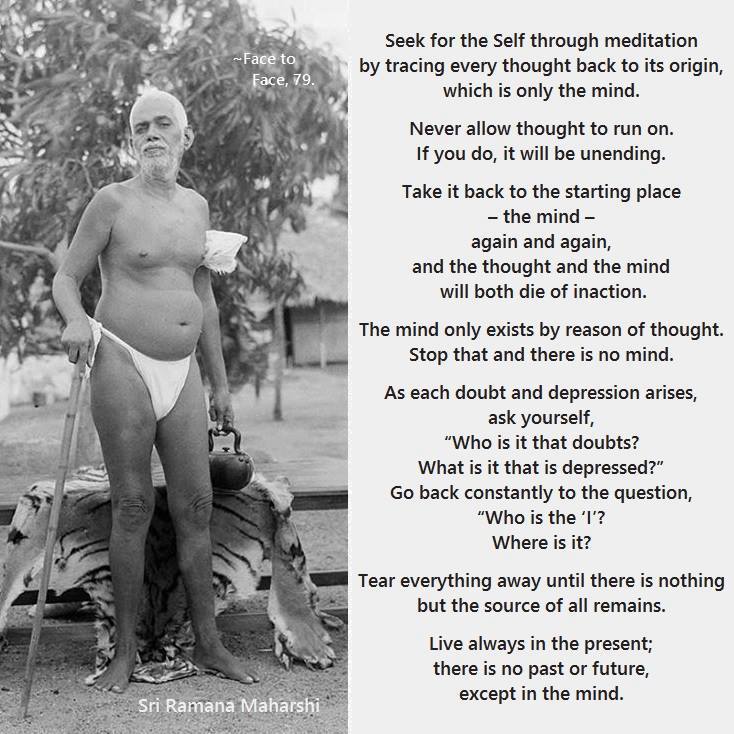 Not the answer you're looking for? Browse other questions tagged moksha atma brahman meditation .

8
What should one choose according to scriptures between thoughtless mind and mind filled with the thoughts of God?
7
How to meditate lying down

16
Is it possible to separate Soul from the body through Yoga
9
World is real even according to Advait Vedanta?
1
How our great Maharishis did a concentration lots of time?
2
Which schools prior to the Gautam Buddha gave the finite size of the atma (आत्मा )?
14
How can we identify a self realized person?
6
What is meant by hridaya or heart?
14
Why do enlightened people contradict each other?
0
Longest samadhi state of Ramana maharshi
5
The agony in the path to liberation