Who is Vratya mentioned in the Atharva Veda?

The Atharva Veda Book 15 mentions about Vratya who created this universe and roused Prajapati/Brahma to action. So, is the Vratya described Lord Shiva as 15:1 says he becomes Mahadev Or is it a Supreme being similar to Purusha or Viraj?

So is the Vratya describe is Lord shiva as 15:1 says he become Mahadeva Or is it a Supreme being similiar to Purusha or Viraj?

If we look at Atharva Veda Kanda 15 – Adhayatma Prakaran Sukta. We can see that the Devata of that Sukta is Vratya. . Here its said that after becoming leader of group of Vratyas he advised Prajapati. This Vratya became Lord of the gods , Ishana , Ishwara . He is singularly became the leader of Vratyas. group .The back is of red color and outer central stomach is of blue color.

Here are the verses from Atharva Veda -

Whom , the Prajapati became turned great , amazing ,broad (jeshtha) ,Brahma (creator) ,became powerful and truthful. From that only one this (Vratya) came into existence.

The which whome is Prajapati (Vratya or Rudra –Shiva) added /created progeny (praja) and by this growth he became very great (Maha) –became Mahadeva.

His back is of red color and outer central portion of stomach is of blue color.

We can see here in this sukta the names like Nila-Lohita which are also stated in Puranas which are of Lord Shiva Or Mahadeva Or Rudra.

He is of both Blue and Red colour since both Pradhana and Purusha merge in him. Since the semen flows from him, he is known as Shukla.

This is the puranic verse from Shreemad Bhagvat Purana which is same as verse 4 and 7 - of Atharva veda kanda 15.

The most powerful Rudra, whose bodily color was blue mixed with red, created many offspring exactly resembling him in features, strength and furious nature.

Conclusion – So from carefully looking at the adjacent verse Of Athrva-Veda and the veres from puranas ,we can say that here most probably the deity Vratya from Atharva veda is Lord Shiva Or Rudra Or Maha Deva. We can clearly see the resemblance of the terms used in both vedas and Puranas. Here Vratya is also depicted a supreme Ishwara. But he is not stated as Supreme being similiar to Purusha or Viraj ,at least in this sukta of Atharvaveda.

There are 18 Paryayas (sub-chapters) in the 15th chapter of AtharvaVeda. All the paryayas describe the activity of Vratya. So, in general consideration the Devata of whole chapter is Vratya.

But if we look in the 5th paryaya of 15th chapter, the Devata there is mentioned as Lord Rudra: 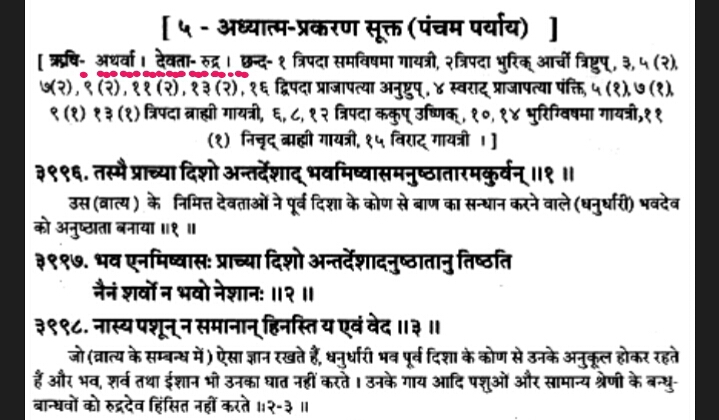 So, it is clear that Vratya described in AtharvaVeda is Lord Shiva himself. The reason why Devata of other paryaya is written Vratya and why Devata of 5th paryaya is written Rudra is because 5th parayaya is strongly associated with Ashta-Murti form of Shiva. Although the 5th chapter describes the activity of Vratya but it is in relation with Ashta-Murti form of Shiva.

Also in the 1st paraya or Birth of the Vratya section, the Devata of 5th Mantra which states 'Vratya became Ishana.', is Rudra. 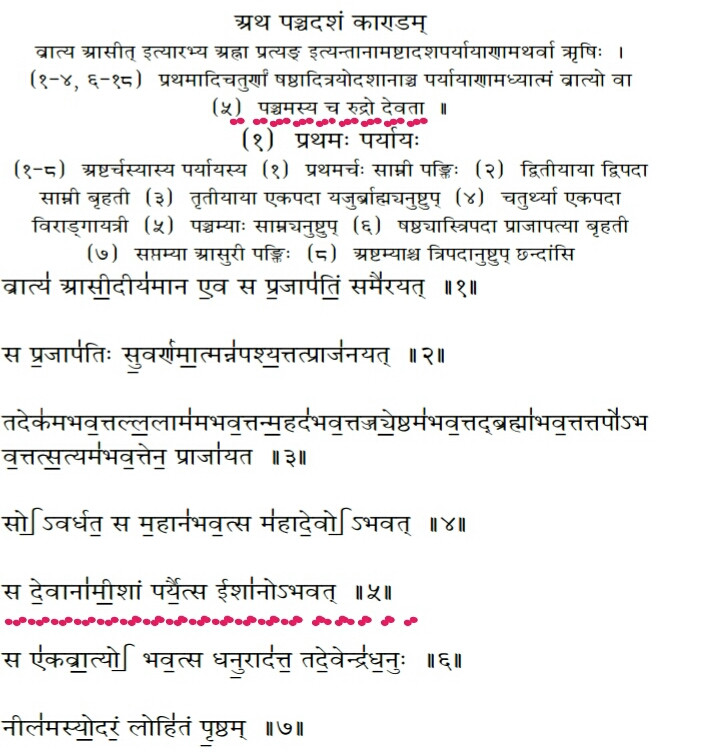 स देवानामीशां पर्यैत्स ईशानोऽभवत् ।। 5
He gained the lordship of the Gods. He became Ishana.

Also without looking the Devata also, by the description of birth given in 1st Paryaya, it is clearly known it is Lord Shiva who is described there:

So, Vratya described in 15th chapter of AtharvaVeda is Lord Shiva.

Not the answer you're looking for? Browse other questions tagged shiva atharva-veda .

20
What names of Lord Shiva used today are from Vedas?
14
What are the eight forms (Ashtamurti) of Lord Shiva?
8
Why is Lord Shiva called NilaLohita?
5
Are there Mandalas in Trika Shaivism (like in Tantra Buddhism)?

45
Why doesn't Shiva worship anybody where as Vishnu worships him in all his incarnations?
6
Who is the ruler of Earth?
11
Do the Brahmanas of the Rig Veda mention Brahma and Vishnu's contest?
11
How does the names and events reoccur in different manvantara or Kalpa or different universes?
14
How did Tripura Sundari come into existence?
15
How Rudra became Shiva in Vedas?
4
Why Shiva created the universe for Kshetrajñahah?
4
How does ramayana mention atharva veda and brahma priest?
0
Why Maa Lakshmi says that neither Lord Brahma nor Lord Vishnu only Lord Shiva commands her to move from one place to another.?