What is the story of the Thiruvalavendhai Varaha temple in Mahabalipuram?

I'm currently visiting India, and I may try to see the Adi Varaha Perumal temple in Mahabalipuram, more commonly known as the Thiruvalavendhai temple. It's a difficult temple to visit; it's closed most of the time, and only opened rarely by the priests of the nearby Sthalasayana Perumal Vishnu temple. It's a Lakshmi Varaha temple, featuring Lakshmi sitting on the lap of Vishnu's incarnation Varaha. That in itself is not unusual; for instance the Thiruvidandai Varaha temple which I discuss in my question here also fits that description. But what makes the Thiruvalaventhai temple unique is that unlike Thiruvidandai and other temples where Lakshmi sits on the left side of Varaha, in Thiruvalavendhai Lakshmi sits on his right. 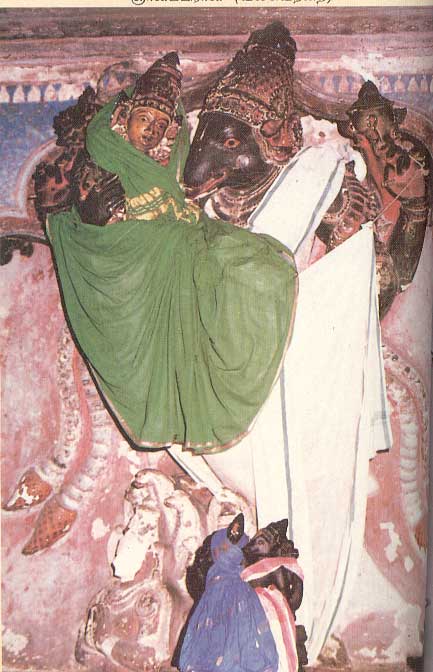 My question is, what is the story of the Thiruvalaventhai temple? Did some incident involving Varaha take place in this location? And is there a reason Lakshmi sits on his right?

Also, why is it called "Adi Varaha", meaning the first Varaha? There's an Adi Vaharaswami temple in Tirupati which I discuss in my question here. Does this bear some relation to that?

I was able to visit the Thiruvalaventhai temple in that India trip, and this is what I learned from the priest (who is also a priest at the Sthalasayana Perumal temple). The Pallava king Harikeshava was a devotee of Vishnu who used to visit the Lakshmi Varaha temple in Thiruvidanthai, which I discuss in my question here. Everyday he would go back and forth between Thiruvidanthai and his capitol of Mahabalipuram, where he would give food to large numbers of Vaishnavas on a daily basis. As a reward for his Bhakti and Bhagavata Kainkaryam, Vishnu appeared before Harikeshava as Lakshmi Varaha in Mahabalipuram itself, that way he wouldn't have to keep going to Thiruvidanthai. That is the origin of the statue in the Thiruvalaventhai temple.

I also found out that the reason why it's so hard to visit the Thiruvalaventhai temple is that regular rituals are not done in the temple. That's because it's an ancient cave temple, in fact it's commonly known as the Varaha cave temple, and it's a UNESCO world heritage site. So they're afraid that daily rituals would damage the ancient rock carvings in the cave.

In any case, this article from Anudinam confirms the basic story of Harikeshava that the priest told me:

A Pallava King made a daily trip to the Varaha Perumal temple at Thiru Vidanthai (15kms north of here on the East Coast Road). He would have his morning food only after this darshan. Also, it was his practice to feed a 1000people each day after coming back from Thiru Vidanthai. Lord Vishnu decided to put his devotion to test. One morning he appeared before the king as a hungry Brahmin carrying along with a child (Goddess in disguise). The king requested if he could first make his daily trip to Thiru Vidanthai and then offer them food as that was his practice. The Lord in disguise rejected this suggestion stating that he was dying of hunger and that it may be too late for the child by the time the king returned. Invoking the blessings of Varaha Perumal of Thiru Vidanthai, the king decided that feeding a hungry child was more important than his trip. Pleased with the king’s true devotion, the disguised Lord provided darshan to the king at the same place as Varaha Perumal with Agilavalli Thaayar on his right side (at Thiru Vidanthai, Goddess is seen to the left of the Lord). At this cave temple, the moolavar Varna Kala moorthy Aadhi Varaha Perumal is sculpted on the rock with his left leg placed on a Naga King and Queen and with his left hand on Thaayar’s lap.

36
Are there any temples for Matsya, Kurma, and Varaha avatars?
10
What is the story of Vishnu appearing to sage Markandeya in Thiruvidanthai?