Why did BORI excise the Vyāsa-Gaṇeśa conversation from its critical edition of the Mahābhārata?

The following extract is from the introduction to The Mahabharata: Volume 1 by Bibek Debroy.

There are many different versions or recensions of the Mahabharata. However, between 1919 and 1966, the Bhandarkar Oriental Research Institute (BORI) in Pune produced what has come to be known as the critical edition. This is an authenticated text produced by a board of scholars and seeks to eliminate later interpolations, unifying the text across the various regional versions. This is the text followed in this translation. One should also mention that the critical edition's text is not invariably smooth. Sometimes, the transition from one shloka to another is abrupt, because the intervening shloka has been weeded out. With the intervening shloka included, a non-critical version of the text sometimes makes better sense. On a few occasions, I have had the temerity to point this out in the notes which I have included in my translation. On a slightly different note, the quality of the text in something like Dana Dharma Parva is clearly inferior. It couldn't have been 'composed' by the same person.

It took a long time for this critical edition to be put together. The exercise began in 1919. Without the Hari Vamsha, the complete critical edition became available in 1966. And with the Hari Vamsha, the complete critical edition became available in 1970. Before this, there were regional variations in the text and the main versions were available from Bengal, Bombay and the south. However, now, one should stick to the critical edition, though there are occasional instances where there are reasons for dissatisfaction with what the scholars of the Bhandarkar Oriental Research Institute have accomplished. But in all fairness, there are two published versions of the critical edition. The first one has the bare bones of the critical edition's text. The second has all the regional versions collated, with copious notes. The former is for the ordinary reader, assuming he/she knows Sanskrit. And the latter is for the scholar. Consequently, some popular beliefs no longer find a place in the critical edition's text. For example, it is believed that Vedavyasa dictated the text to Ganesha, who wrote it down. But Ganesha had a condition before accepting. Vedavyasa would have to dictate continuously, without stopping. Vedavyasa threw in a counter-condition. Ganesha would have to understand each couplet before he wrote it down. To flummox Ganesha and give himself time to think, Vedavyasa threw in some cryptic verses. This attractive anecdote has been excised from the critical edition's text. Barring material that is completely religious (specific hymns or the Bhagavad Gita), the Sanskrit text is reasonably easy to understand. Oddly, I have had the most difficulty with things that Vidura has sometimes said, other than parts of Anushasana Parva. Arya has today come to connote ethnicity. Originally, it meant language. That is, those who spoke Sanskrit were Aryas. Those who did not speak Sanskrit were mlecchas. Vidura is supposed to have been skilled in the mlechha language. Is that the reason why some of Vidura's statements seem obscure? In similar vein, in popular renderings, when Droupadi is being disrobed, she prays to Krishna. Krishna provides the never-ending stream of garments that stump Duhshasana. The critical edition has excised the prayer to Krishna. The never-ending stream of garments is given as an extraordinary event. However, there is no intervention from Krishna.

What reasons did the Bhandarkar Institute offer to edit out the Vyāsa-Gaṇeśa conversation from its critical edition of the Mahābhārata? 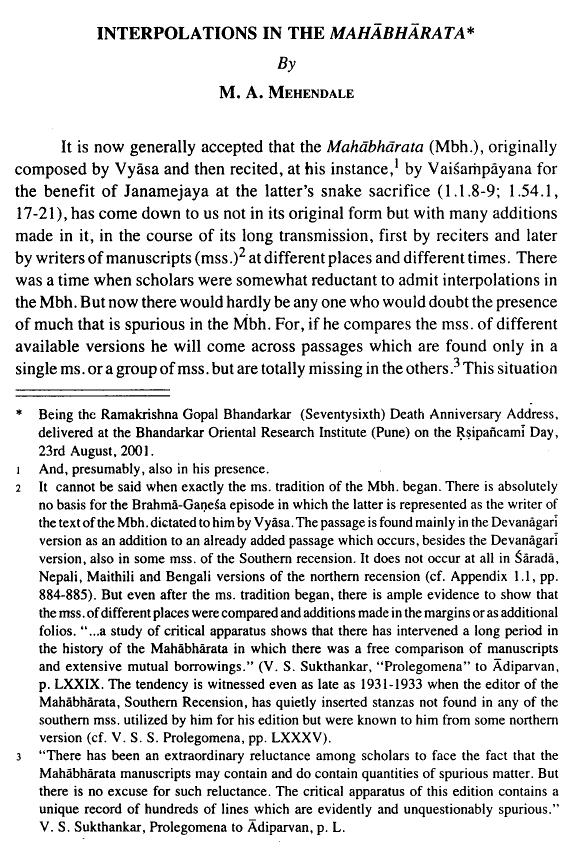 See footnote number 2 that tells exactly about the Gaṇeśa-Vyāsa episode:

2   It cannot be said when exactly the ms. tradition of the Mbh. began. There is absolutely no basis for the Brahmā-Gaṇeśa episode in which the latter is represented as the writer of the text of the Mbh. dictated to him by Vyāsa. The passage is found mainly in the Devanāgarī version as an addition to an already added passage which occurs, besides the Devanāgarī version, also in some mss. of the Southern recension. It does not occur at all in Śāradā, Nepali, Maithili and Bengali versions of the northern recension (cf. Appendix 1.1, pp. 884-885). But even after the ms. tradition began, there is ample evidence to show that the mss. of different places were compared and additions made in the margins or as additional folios, "...a study of critical apparatus shows that there has intervened a long period in the history of the Mahābhārata in which there was a free comparison of manuscripts and extensive mutual borrowings." (V. S. Sukthankar. "Prolegomena" to Adiparvan, p. LXXIX). The tendency is witnessed even as late as 1931-1933 when the editor of the Mahābhārata, Southern Recension, has quietly inserted stanzas not found in any of the southern mss. utilized by him for his edition but were known to him from some northern version (cf. V. S. S. Prolegomena, pp. LXXXV).

But even those excluded verses were included in the second edition of the critical edition with copious notes, as mentioned by Bibek Debroy in the quotation of the question.

You can find this paper on the internet with a simple google search: INTERPOLATIONS IN THE MAHĀBHĀRATA - M. A. Mehendale

Of course we can either agree or disagree with that methodology used by the BORI. My personal opinion is that there could be many genuine Mahabharata verses even if they are to be found in just 1 or 2 manuscripts.

According to my study, the answer for this question lies in the development of Shaivism itself.

Shaivism comprises adoration of Shiva and Parvati as divine couple, Skanda and Ganapati as their children, Nandi and others as their Ganas, eulogisation of Shiva in Puranas like Shiva Purana, etc.

Of the royal priests I am the chief viz., Brhaspati (the priest of gods), O son of Prtha, you should know that; of the army-generals, I am Skanda [the War-god]; of the water reservoirs, I am the ocean.

In my opinion, it is for this reason, the scholars, who compiled the critical edition of Mahabharata, removed the Vyāsa-Gaṇeśa conversation.

The sage Krishna-Dwaipayana completed his work in three years. Rising daily and purifying himself and performing his ascetic devotions, he composed this Mahabharata.

It is most likely because, as with most popular Gods, Ganesha worship came to dominance in the Guptan Era; and Mahabharata predates Gupta age. Secondly, self-referential verses are often latter interpolations to a text.

I don't understand why people are frustrated over this. Religious Studies (a subset of Anthropology) is not Theology, this distinction is maintained in other religions as well. Even in hindu orthodoxy we understood that the text as-we-know-it was composed over a long period of time. From wikipedia,

The Mahābhārata itself (1.1.61) distinguishes a core portion of 24,000 verses: the Bhārata proper, as opposed to additional secondary material, while the Aśvalāyana Gṛhyasūtra (3.4.4) makes a similar distinction. At least three redactions of the text are commonly recognized: Jaya (Victory) with 8,800 verses attributed to Vyāsa, Bhārata with 24,000 verses as recited by Vaiśampāyana, and finally the Mahābhārata as recited by Ugraśrava Sauti with over 100,000 verses.[18][19]

Not the answer you're looking for? Browse other questions tagged mahabharata sanskrit indology critical-edition .

5
In the Mahābhārata, where does Vidura-gītā begin and end? What are its first and last verses?
2
Who was it that really saved Draupadī's modesty?
2
Is this verse of mahabharata found in the BORI critical edition of Mahabharata?
3
Which recension of Mahābhārata did K M Ganguli use for his translation?
6
Is there a BORI critical edition of Rigveda available online?
3
Is the verse about Rāmāyaṇa containing 24,000 ślokas present in the critical edition?
5
Is the verse about Indra forcing himself upon Ahalyā present in the Critical Edition of Rāmāyaṇa?