Does anyone know the name of this goddess?

The following image is of an unknown goddess. Does anyone know the name of this goddess? 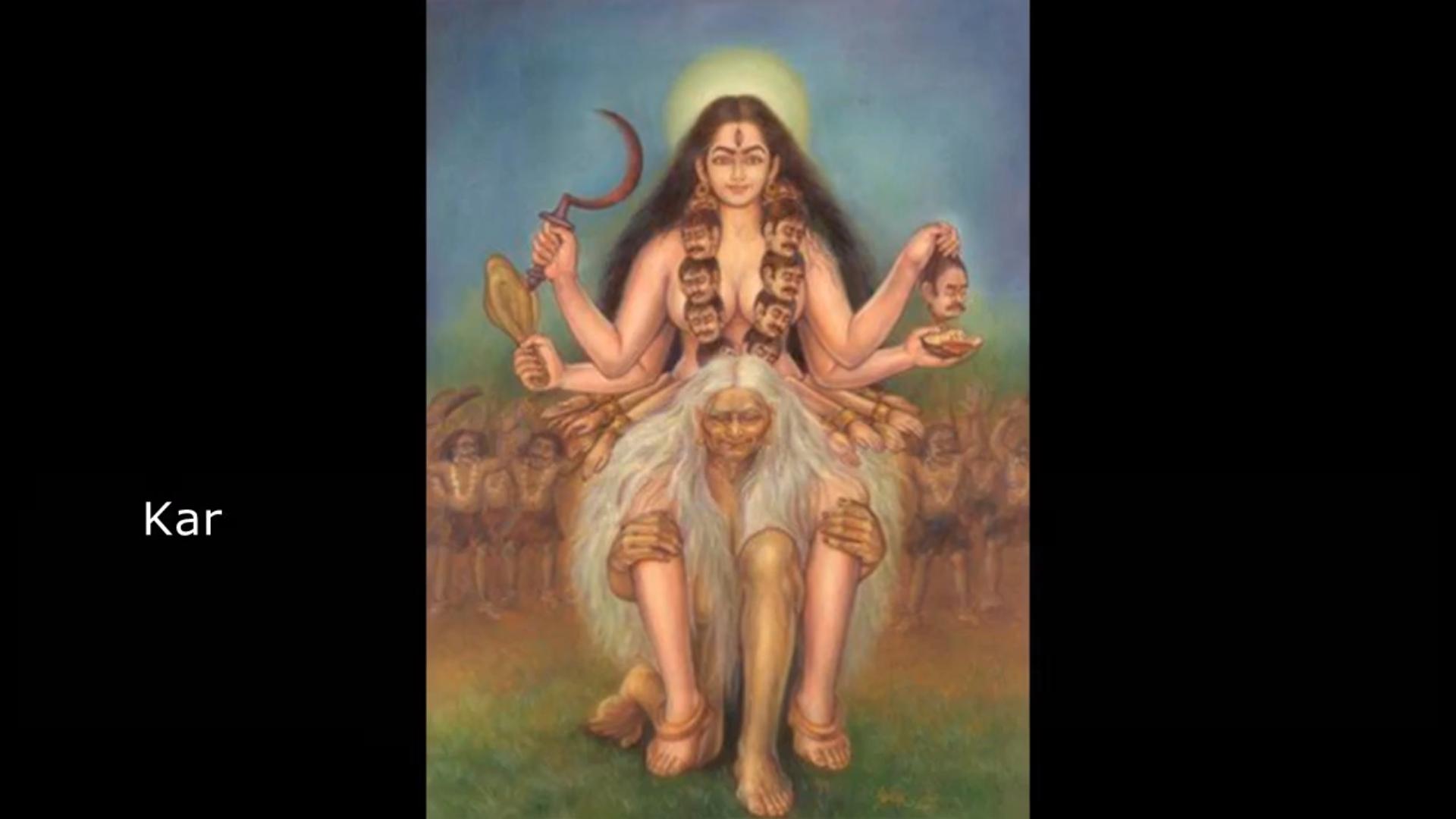 Sitting on the shoulder of Vetala with a sickle in right hand and a severed head in left hand.

Unlike what others have said, the person carrying her is not a vetala, it's a preta.

The black or red coloured Chamunda is described as wearing a garland of severed heads or skulls (Mundamala). She is described as having four, eight, ten or twelve arms, holding a Damaru (drum), trishula (trident), sword, a snake, skull-mace (khatvanga), thunderbolt, a severed head and panapatra (drinking vessel, wine cup) or skull-cup (kapala), filled with blood. Standing on a corpse of a man (shava or preta) or seated on a defeated demon or corpse (pretasana). ... Sometimes, a crescent moon is seen on her head.[4][5] Her socket eyes are described as so intense that it burns the evil of all three worlds. She is accompanied by fiends and goblins.[5][6] She is also shown to be surrounded by skeletons or ghosts and beasts like jackals, who are shown eating the flesh of the corpse which the goddess sits or stands on.

This is another image of hers, from the Wikipedia page: 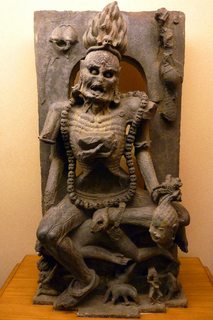 In the Durga Saptashati, it's clearly mentioned that she rides a preta.

She is one of the Ashta Matrikas

The black coloured Chamunda is described as wearing a garland of severed heads or skulls (Mundamala) and holding a Damaru (drum), trishula (trident), sword and pānapātra (drinking-vessel). Riding a jackal or standing on a corpse of a man (shava or preta), she is described as having three eyes, a terrifying face and a sunken belly.

This image closely resembles Goddess Kaalaraatri. She is mentioned in famous texts like Sri Durga Saptashati. But she is on VetAla which is not a common vehicle for goddesses.

Kaalratri (sometimes spelled Kalaratri) is the seventh form amongst the Navadurga (ie. the nine forms of Hindu Mother Goddess referenced in Durga Saptashati, Chapters 81-93 of the Markandeya Purana, the earliest known literature on Goddess Durga). Goddess Kaalratri is widely regarded as one of the many destructive forms of Mother Goddess - Kali, Mahakali, Bhadrakali, Bhairavi, Mrityu, Rudrani, Chamunda, Chandi and Durga. Wiki

Another possibility is Goddess Sri Dhoomavati which is one of 10 mahAvidyAs. She is also very famous among the shakta tradition. Wiki

The weapon she holds and the ornament in her legs indicate that she might belong to the Southern part of India (Dravidian). Maybe Tamilnadu or Andhra And the people on the background looks like asuras, the heads in her hands looks human' she also stores the blood with a cup like thing like the god Muni, and the woman that is lifting her doesn't look human friendly and she has more than eight arms so, I'm guessing that she might be a Goddess to the Asuras.(I may be wrong. It's just my assumption. She might be a Goddess to the humans too). you can find idols like this in South Indian Temples They are old Gods still worshipped today 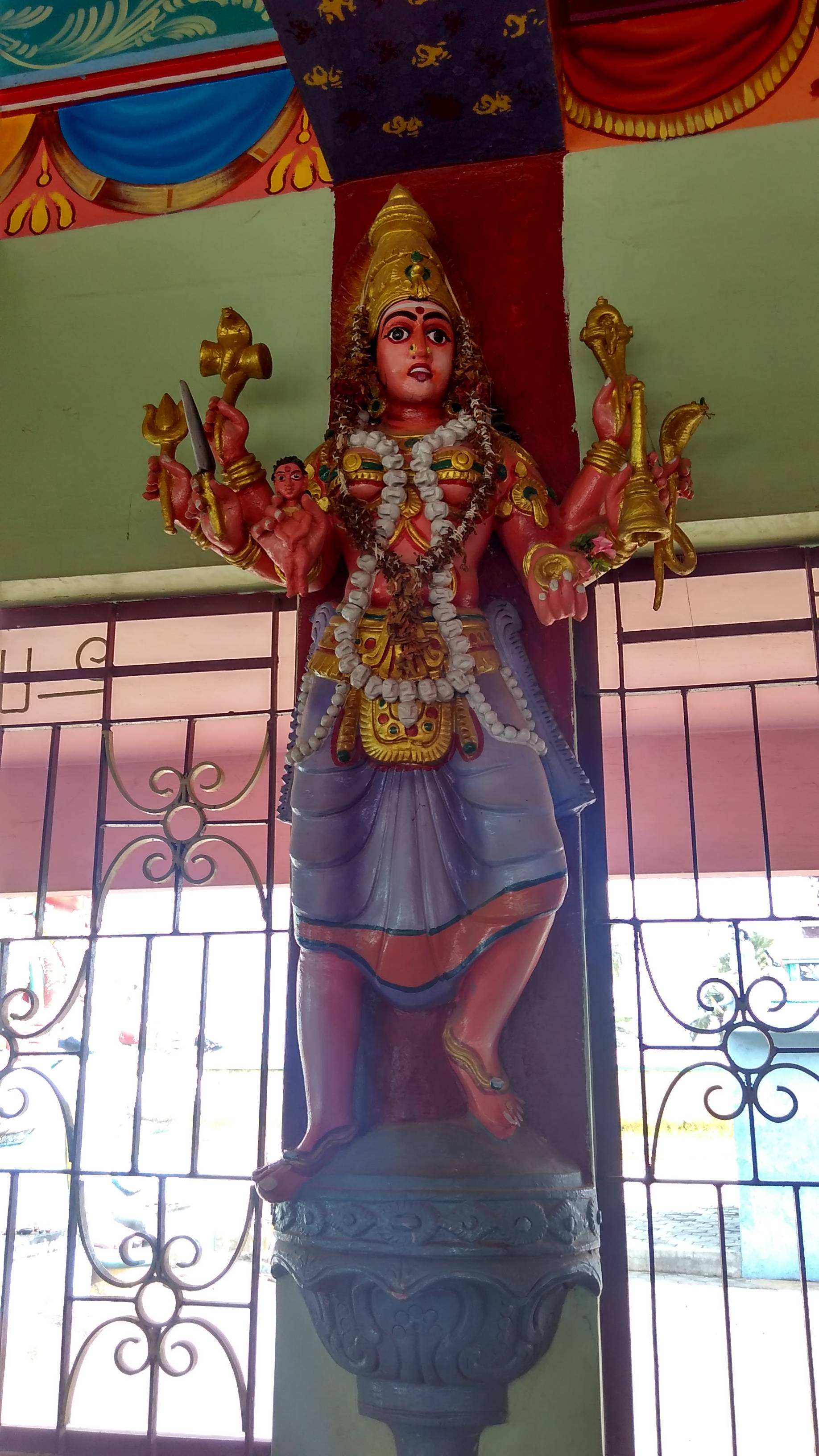 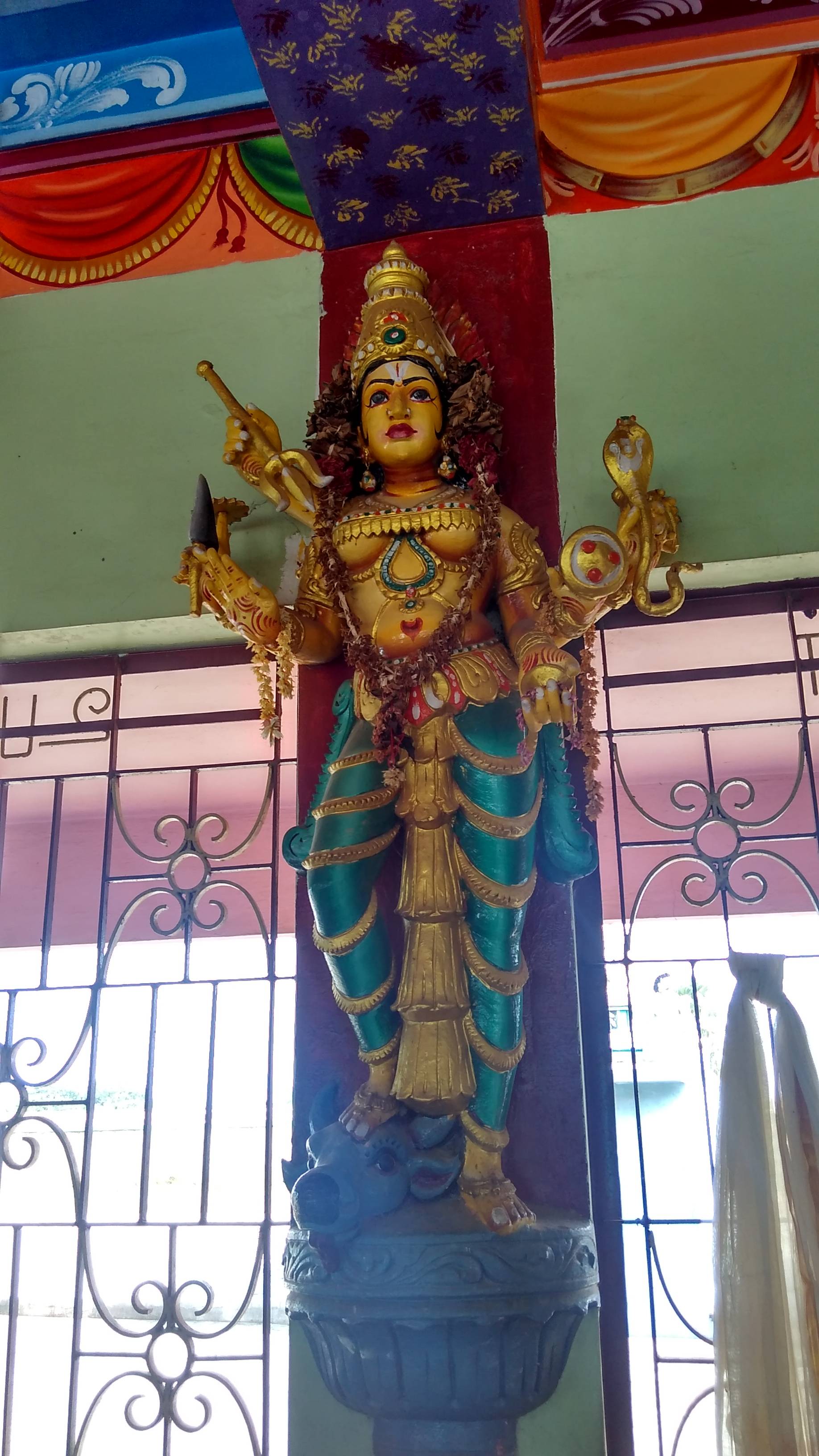 Not the answer you're looking for? Browse other questions tagged goddess identification-request .

10
Does anyone know the name of this Hindu deity?
8
Which goddess (Ishta devi/Kula devi) sits legs folded & holding shiva linga?
10
Vishnu's avataras
1
Where is this statement "Destiny determines the consequences...." found?
4
Need help identifying Hindu Goddess
5
Is this real image of Kaanchi Kamakshi?
4
Which Goddess is this whose idols were discovered recently in Kashmir?