Why did Indra marry Shachi, the daughter of an Asura?

Interesting question and a valid one. Why should Indra, the ruler of Devas marry an Asura princess? There is no clear cut answer but the Rigved contains one particular hymn that is spoken by Shachi herself and which gives an insight into what could have happened.

In Verse 159, Book 10 of Rigved Shachi states that there was some competition for Indra's affections and she beat many rivals to become his queen and even Indra was submissive to her after that: 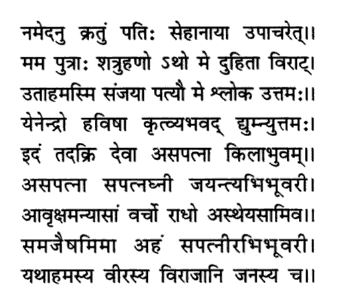 It appears to be sort of a Swayamvar of the opposite kind where many women were vying for Indra's affections but Shachi beat them to become his chief queen. The book A Classical Dictionary of Hindu Mythology and Religion, Geography, History also refers to the Taittirya Brahman stating that Shachi won because she was the most beautiful of all other godesses:

11
Why did Indra deliver Sanyasis to the wolves as the Kaushitaki Upanishad says?
9
How did Indra use deception to defeat Prahlada's son Virochana?
9
Which scripture mention Race among the Gods to marry Ahalya?
9
Who did Indra receive a prophecy from in a golden ship?